After installing the Windows 10 Cumulative Update for April 2016 – KB3147458 – there is a chance that you might be affected by an issue where an error message stating that a specific resource pertaining to the WindowsStore.admx file could not be found. The full error message reads: 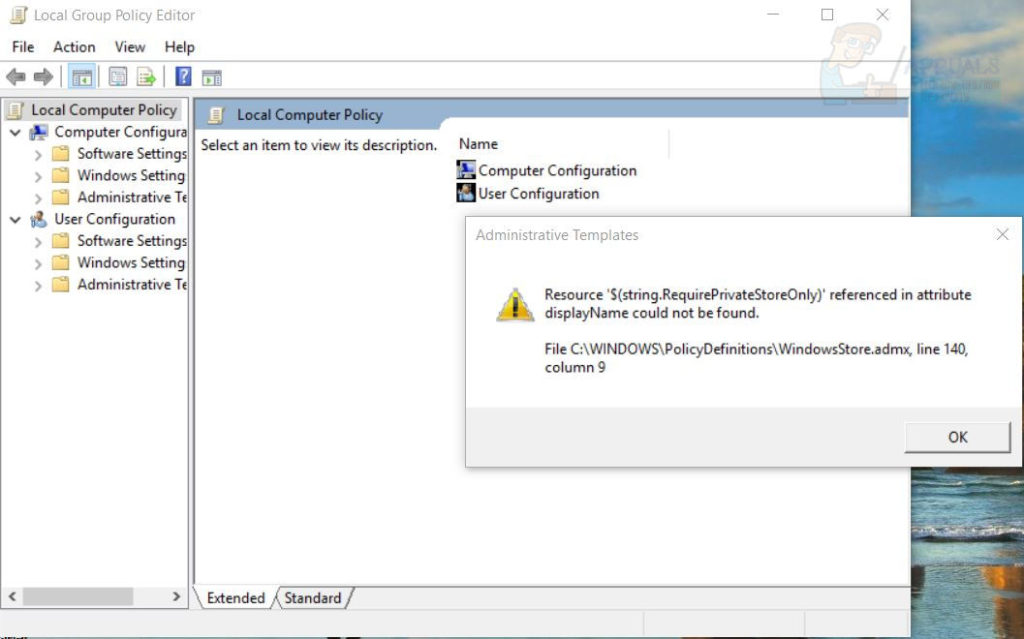 This error message, although disruptive, isn’t too big of a problem as dismissing it causes it to go away and then come back, and once it is dismissed for a second time, affected users are free to go about their business in the Local Group Policy Editor. However, the real problem here is that, as part of this issue, the Store folder under User Configuration > Computer Configuration > Windows Components in the Local Group Policy Editor goes missing.

Pro Tip: Before proceeding with the steps listed and described above, be sure to navigate to C:\Windows\PolicyDefinitions\ and copy a file named WindowsStore.admx to a safe location as a backup to be restored to its original location in the event that something goes wrong.

While a Windows 10 user can deal with having to dismiss a couple of error messages when launching the Local Group Policy Editor, an entire folder of policies going missing is kind of a massive issue. This problem is probably caused because the KB3147458 update has added a new policy setting to the WindowsStore.admx file but failed to add its corresponding string ID to the WindowsStore.adml file. When this issue first came to light, affected users simply uninstalled the KB3147458 update and hid it in anticipation of another Windows update that would fix the issue seeing as though Microsoft became aware of this bug almost immediately. Thankfully, within a month of the surfacing of this problem, Microsoft rolled out a Windows update equipped with a more than viable fix.

However, if you can’t install the Windows update that fixes this issue or if you are still experiencing this issue even after installing all available Windows updates, here’s what you need to do in order to fix this problem:

Right-click on the Start Menu to open the WinX Menu.

One by one, type in the following commands, pressing Enter after each one and also waiting for one command to be executed successfully before typing in the next one:

Note: In case you still don’t get what needs to be deleted, the following are all of the lines that need to be cleared: 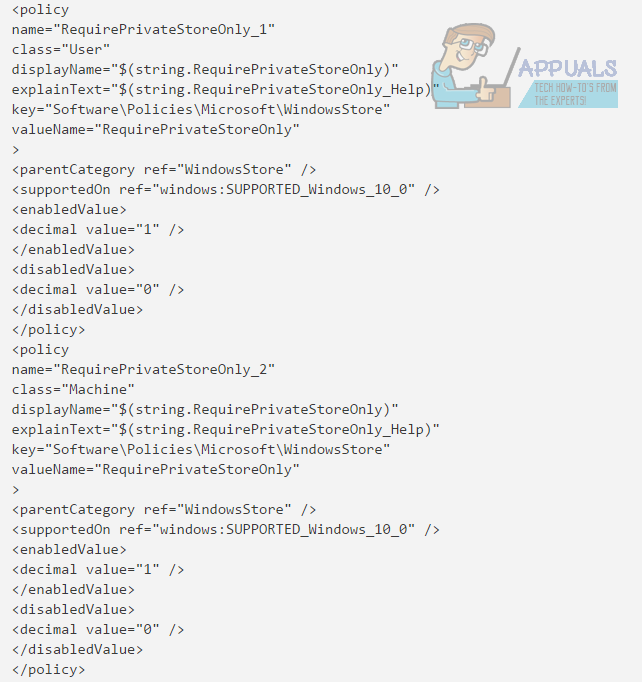 Press Ctrl + S to save the changes you have made to the admx file and then close Notepad.

Back in the elevated Command Prompt, type in the following command-line and then press Enter to restore ownership of the admx file back to TrustedInstaller.

Once the command-line has been executed successfully, you can close the elevated Command Prompt and restart your computer. Once your computer boots up, you should no longer receive any error messages when launching the Local Group Policy Editor and the Store folder of policies should also be back where it belongs.