Converting Youtube videos to MP3 (or similar audio format) is a popular way to obtain music, and there are plenty of sites specifically for this purpose. The problem, however, is that many people looking for “lossless” or “CD-quality” music are misled by what these converters are capable of.

If you aren’t much of an audiophile, and you don’t care about things like MP3 bitrates, this article isn’t for you – but if you’re someone who frequently uses website converters to download “320kbps” MP3s from Youtube videos, read on to find out why you’re wasting your time.

For starters, Youtube does not play audio at 320kbps, even on the highest video resolution. It does not come even close to 320kbps. Youtube uses two types of audio formats – AAC (wrapped in an MP4 container) or Opus in a WebM container.

For AAC, Youtube will play a maximum audio bitrate of around 126 kbps. For Opus, it can be between 56 kbps and 165 kbps. This is regardless of the audio source format being uploaded because Youtube will automatically re-encode videos to use their format. So even if you upload a video with 24/96 lossless audio, Youtube will convert it to 126 kbps AAC in an MP4 container.

Note: You can also try to manually determine the Bitrate of any audio file yourself.

Once a video reaches a certain amount of views and becomes “popular”, Youtube will automatically re-encode a WebM/Opus version of the video, which can be only slightly higher in quality (156 vs 126 kbps). There are numerous ways to test this, but let’s use a free online tool called “YouTube Video Info”.

The video we will use will be “[Lossless] Dire Straits – Money for Nothing 24 Bit Sound 2K Video”. This video was uploaded as an MKV merged with a lossless FLAC file, so it should sound amazing.

Now we will run the video URL through the video info tool, and here is what we get (note the bitrates circled in red). A variable bitrate stream between 55 to 143 Kbps. We can do this again in VLC, and inspect the codec while streaming the video. 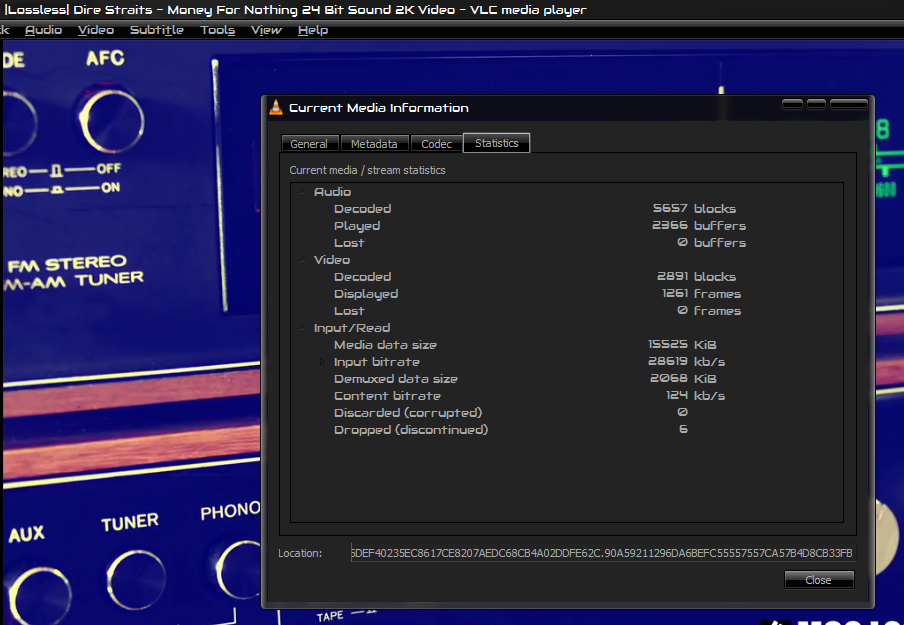 Audio Source Matters, but Not Much

Despite its bitrate, that video actually sounded really good. How come?

It had great source material, a lossless format from a master studio track. Of course, it is going to sound better than a majority of videos out there that use horribly compressed MP3s as the audio source. So even if it is not being delivered to you in pure lossless format, it still sounds better than the average music video on Youtube. But make no mistake that the original audio source is being compressed by YouTube.

In fact, by converting a YouTube video to 320 Kbps MP3, you are in fact damaging the audio quality. The conversion site will rip the audio from the YouTube in its AAC / MP4 container, then re-convert it to a 320 Kbps MP3. Anytime you convert an audio file from one format to another, it gets compressed all over again – and by “upsampling” a 128 Kbps source to 320 Kbps MP3, you are in fact just adding a bunch of useless data to the file which equates to useless background noise.

Imagine it like this – you have some old VHS tapes laying around. You copy them to your computer and burn them to DVD. Do they magically become DVD-quality videos? Or, say you have a 500×500 image file, and you resize it to 5000×5000. Even though the file size increases, the image itself becomes blurry, right?

That is essentially what happens when you “convert” a YouTube video to a higher bitrate. If you want to convert YouTube videos to audio files without hurting the audio quality, you’re better off converting to a lossless format, like WAV or FLAC. At least that way, the original YouTube video won’t be compressed during re-encoding.