The legitimate fwupdate.exe process is associated with LG Firmware Autoupdate from CST. The executable is part of an LG utility that is used to update the drivers of all related LG devices. As some users have pointed out, fwupdate.exe was likely bundled with another LG-related software driver and was installed without your say-so. Most of the time, it’s installed along with the writer/rewriter software.

Note: Keep in mind that if you’re using Windows 10, WU (Windows Update) is already configured to take care of all the LG-related firmware updates. Even LG support is recommending Windows 10 users to uninstall the software associated with fwupdate.exe since it’s no longer needed.

There is a lot of malware that is camouflaging itself as trusted processes in order to evade security checks. However, this is not really applicable if you personally installed LG software on your system.

But let’s be extra sure you’re not dealing with a virus by viewing the executable’s location. To do this, open Task Manager (Ctrl + Shift + Esc) and look for the lg_fwupdate (fwupdate.exe) executable in the processes tab. Once you find it, right-click on it and choose Open File Location. 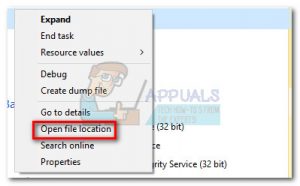 If you haven’t installed the LG Toolkit in a custom location, the revealed path should be C:\ Program Files (x86)\ lg_fwupdate \fwupdate.exe.

If you discover the fwupdate.exe in any other location (a location that you didn’t set yourself), you might actually be dealing with a virus infection. In this case, follow our-in depth article (here) about using Malwarebytes to remove any persistent malware from your system.

Although you can easily prevent fwupdate.exe from tapping on your system resources, it’s not really advisable to do this if you’re using an LG blue ray drive. Blue-ray drivers are still receiving constant updates because the format is continuously undergoing changes. If you stop the fwupdate.exe process from updating your driver version, newer Blu-ray disks might not play correctly.

If you don’t have any LG-related software or hardware, it makes no sense in keeping the fwupdate.exe process active since it no longer has what to update. In this particular case, the best solution would be to uninstall the entire software that is behind it.

Depending on which software you’re using, you might have to uninstall two different programs. Here’s a quick guide through the whole thing:

If you want to keep the LG updating software but you’re bothered by the frequency of the updates, you can prevent fwupdate.exe from automatically launching at startup. But doing this means that you’ll periodically have to open the fwupdate.exe executable manually and update to the latest firmware version to make the latest blue-ray disks playable.

Here’s a quick guide on how to prevent the fwupdate.exe process from automatically launching at startup:

If you have an LG blue-ray drive or another hardware that needs regular updates, make sure to manually open the fwupdate.exe (located in C:\ Program Files (x86)\ lg_fwupdate \fwupdate.exe.) in order to allow the updates to get through.

What is fwupdate.exe and should I remove it?