Time-lapse photography has to be one of the greatest photography technique to ever be invented. Imagine being able to watch a sunset or a flower bloom in a matter of seconds. All of these are beautiful aspects of nature but would normally require a certain level of patience to truly experience them.

In case you are out of the loop, time lapse is a technique where a series of photos are played at a significantly higher frame rate than that which was used to capture them. Confusing, I know, so I will give you a practical example with the flower blooming instance. If the camera has been set to take one shot per second which are then played back at the rate of 30 shots per second. The sequence of photos then become some sort of a video that seems to be in fast forward mode. This is what we call a Time-lapse video.

But there is also another way you can create a time lapse video. Record a video at normal speed then speed it up. It is the simpler method but has its set of limitations. For instance, when recording for long periods, the video size becomes too large which will pose a problem in post editing since most editors cannot handle very large files. The video quality will also be compromised. It is incomparable with the standard method of shooting a series of images then merging them.

So in this post, we will be looking at the best software you can use to create a time lapse video. These software allow you to merge frames captured from any device including your computer’s webcam. Let’s begin.

For a free software, I have to say that Panolapse has quite a portfolio. It’s, therefore, unsurprising that I recommend it as my first pick.

One of the first things you will love about this software is the ability to add rotational panning to your time-lapse video. Conventionally, to introduce this kind of motion you would have to use a motorized track to move your camera around which is limiting in a way since they are not very flexible. Panolapse will now act as your motorized head and uses 3D perspective correction so that the rotational pan looks natural.

RawBlend is another great feature that allows you to compile multiple frames flawlessly. It achieves this by balancing out the exposure, colour, contrast and other image attributes for all the frames. Also related to RawBlend is the Deflicker feature that adjusts the brightness level for each frame to eliminate the flickering that can sometimes be observed when switching between two frames.

Panolapse also has an auto exposure feature that will be especially useful when shooting in areas where the light is changing rapidly. Additionally, Panolapse will be great in creating panoramas. The final video can be saved in various formats such as JPG Frames, .Mov and .Mp4.

SkyStudio is an excellent timelapse software for windows that can work with your webcam or any other capture device. And you don’t have to pay anything to use it.

One of the highlight features of this software is the motion detection that allows the camera to begin recording immediately it detects movement. And the good thing is that it will immediately slow down the time lapse so that you can discern what the moving object is.

The software can also be used to make stop motion videos thanks to its new SkyStudio Video Compiler. This is achievable through taking a series of snapshots manually then compressing them into a video using the compiler.

Sky studio includes a night vision feature and it will lower the frame rate when shooting at night to enhance the quality of images and videos being captured. This software can take videos at any size and frame rate and is also able to support two video devices simultaneously.

Chronolpase can be used to take still photos using your Windows machine then combine them to create a time lapse video.

Some of the post-processing editings you can do using Chronolapse include cropping the picture, scaling, and creating picture in picture effects. It even includes the option to add an audio file to the compiled video.

Chronolapse also has dual monitor support and includes tools that you can use to annotate your video. This software is not limited to the pictures taken using your Webcam. It allows you to add pictures from other sources like your phone, a different PC or professional camera then join them into a time-lapse video.

This software is completely free to use.

Photolapse is yet another free tool that is used to compile JPG images into an AVI format time lapse videos. It is compatible with all versions of Windows and its small footprint means that it does not take up much of your system resources.

Photolapse is a software whose strength lies in its ease of use. Creating a time-lapse is as easy as selecting a folder containing the images. In fact, the hardest thing you have to do is probably selecting whether to use all the images in the folder to create your time-lapse video or add them in a particular sequence. 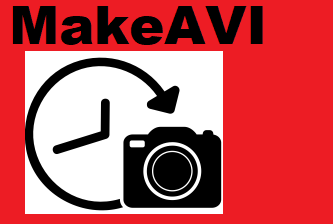 MakeAVI is a very basic time lapse software that has been created to do just one thing. Help you make time-lapse videos as easily as possible. It offers support for various image file formats such as JPG, PNG, and BMP but can only save the time-lapse video in AVI format.

This may not be the best software if you are into serious photography but if it’s something of a hobby then it will be excellent. It is lightweight meaning it does not affect the performance of your computer and it is the easiest software you will use.