The story surrounding the recent slew of Google Pixel 3 XL leaks has just gotten more interesting, as further leak details continue to crop up, including details about the leaked devices and the Pixel 3 XL’s hardware specs.

As we covered just earlier today, the source of the Pixel 3 XL leaks has been traced back to a Ukranian black market dealer who allegedly has their hands on a large cache of pre-production Pixel 3 XL devices, and has been selling them for around $2,000 USD per device to various people, such as YouTube reviewers and tech websites.

Of course, a pre-production unit is not the final device version that will be released in October, its more like a “beta” version of the Google Pixel 3 XL – if the black market dealer is indeed selling legitimate pre-production units, and not fake devices.

In any case, some details surrounding how the pre-production units fell into the wrong hands has cropped up, as it seems that earlier this month an “anonymous well-wisher” provided tech website Mobile-Review with a prototype version of the Pixel 3 XL. Mobile-Review claims, and their claim is backed up by a Google employee’s email address on the packaging, that these Pixel 3 XL prototype units were intended for the Pixel Team developers – the devices were codenamed “Nelit”.

How these prototype devices got routed from the Pixel Team developers to black market dealers is currently unknown – we’re imagining some kind of Fast and the Furious / Mission Impossible style truck heist, but maybe it was a case of mistaken address. It’s anyone’s guess.

In any case, more details about the Pixel 3 XL have just leaked today, mostly surrounding its hardware specs and software UI changes, which we’ll go into.

For starters, the Google Camera has been redesigned with a carousel to house the different modes – basically the app will no longer use a navigation drawer to switch between the Video, Camera, and Panorama modes, but use a carousel wheel instead.

Its unclear if users will be able to swipe the tabs, but there is a fifth “More” section that houses access to the Slow Motions, Lens, and Photo Sphere settings.

It also seems the Pixel 3 XL has retained Face retouching in Portrait mode in default “off” mode, while adding a “Natural” and “Soft” filter and zoom-in ability. The 12.2 megapixel resolution on the rear camera has been confirmed, with the front-facing camera at 8 megapixels – oddly enough, only one of the two expected lenses appear in the options menu. 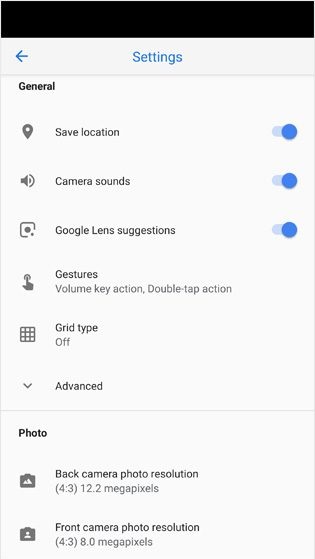 Additionally, the app settings reveal a new “Google Lens suggestions”, which insinuates that the Google Lens is always analyzing the world when the camera is open, to offer search results.

In the advanced settings we find a new option to use H.265/HEVC format for efficient video storage, which is something recently added in Android Pie and results in up to 50% smaller videos when compared to H.264/AVC, although some platforms may not support this new format. 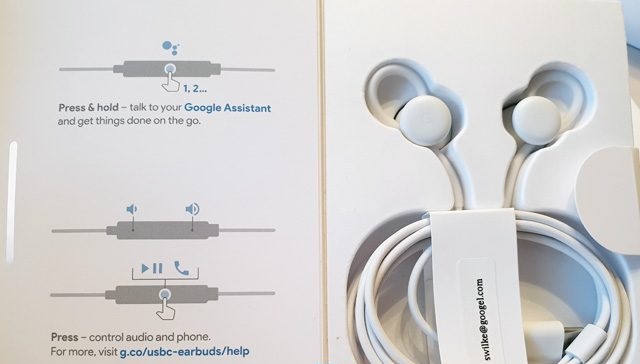 The Pixel Bud USB-C headset included in the packaging is able to access Google Assistant by pressing and holding the center button, which is kind of a cool feature.

As for the Pixel 3 XL’s hardware, it’s a bit evident that the leaks are from a prototype device (or a really convincing fake), because there is a noticeable gap between the device’s glossy edge and the rear panel – and there is a two-tone design within the glass window which extends to the entire perimeter of the rear cover. Mobile-Review described this as feeling like “plastic”, which shouldn’t be entirely surprising – its possible that prototype devices don’t use the same materials as the final devices, or it’s a cheap plastic fake with an elaborate background story.

Mobile-Review also noted that screen brightness when in direct sunlight is not as great as the Samsung Galaxy Note 9 – which is often a huge weakness for any type of mobile device, though you’d expect the Pixel XL 3 would be on top of this sort of thing. But the bright side (no pun intended) is that the Colours setting has a new “Automatic” option that wasn’t previously found on the Pixel 2 XL.

As we mentioned above, the material quality is mostly likely attributed to the fact that it’s a prototype device being reviewed, and the software isn’t exactly finished. While the prototype devices are running on Android Pie 9 with the latest August security patch, there doesn’t seem to be a hardware-reliant face unlock feature.

We’re sure there’s going to be a lot more leaks regarding the Google Pixel 3 XL before it ships out in October, with so many prototypes and pre-production units floating around the “black market” and being reviewed by YouTubers and tech websites.