As one of the most widely used messaging platforms, WhatsApp, owned by Meta, has quickly gained widespread attention. According to estimates, over a billion individuals use the app daily, sending over 65 billion messages across a 24-hour span.

So, the fact that malware and spam have made their way onto the platform is hardly surprising. This guide to delves deep into the logistics of how safe WhatsApp really is, and how you can avoid its most frequent fraud and security issues.

WhatsApp is more secure than other messaging apps since its data is encrypted from beginning to end. Therefore, it’s in the same bracket as other end-to-end encrypted services like iMessage, Facebook Messenger, Instagram Messages, Snapchat, and more. However, it’s not completely reliable either.

It’s important to remember that WhatsApp still needs your contact information even when your data is encrypted. Your privacy is still at risk, though to a lesser extent than without encryption.

Additionally, WhatsApp analyzes how much time you spend using the service. So, while WhatsApp can protect your privacy by encrypting your files, it still needs to gather certain information about how you use the app. Well, we guess that could be said of any app because almost all the apps gather your information in several ways.

Why WhatsApp security is in the spotlight

As several individuals purchase goods via messaging apps, conversing effectively in the commercial world is becoming increasingly important. Conversational marketing has been shown to boost brand loyalty, revenue, and productivity.

With over 2 billion monthly active users, WhatsApp is the obvious choice for organizations looking to initiate client messaging campaigns. Also, WhatsApp is releasing new commercial goods and services, making it an increasingly popular platform for companies to experiment with and develop chat-based apps.

More than five million companies are currently utilizing WhatsApp Business. In addition, 85% of satisfied WhatsApp clients never contact the brand via any other medium after receiving positive service. But you must ensure it’s secure and your clients are safe before you step on board. Here, we’ll eliminate those security fears so you can focus on confidently developing your approach to communication.

WhatsApp’s end-to-end encryption makes it so that all chats between the sender and the recipient are truly “private,” as no one but those two people can read the messages or access the transferred files. WhatsApp stores your chat history on its server for a maximum of up to 30 days, but it still cannot read those messages due to the encryption.

Because it relies on Wi-Fi rather than your mobile operator, sending a message using WhatsApp is free, no matter how far it needs to go. But if the message couldn’t be sent for some reason, WhatsApp would keep it stored in its server until it was properly sent. This means that, within that time being, WhatsApp can access your message.

Moreover, users of WhatsApp can adjust their own privacy settings. For example, you can set your profile’s visibility to let people know whether you’re online. In any case, keep in mind that Facebook now owns WhatsApp. When you use WhatsApp, the app keeps track of how often and for how long you use it and then shares that data with Facebook.

Why would WhatsApp not be safe?

WhatsApp’s end-to-end encryption safeguards your messages from being intercepted and read while they travel from your device to their intended recipient. But it does not safeguard consumers from scamming and other forms of online fraud.

For instance, a typical WhatsApp scam involves the fraudster posing as a victim’s friend to get financial assistance. Most con artists pretend to be friends or family members to solicit money.

Users of WhatsApp should also exercise caution when it comes to anything delivered to them via the app. Malware can be downloaded into a phone if the user visits fishy websites or opens unknown attachments.

Scammers and con artists can use any means of contact they can get their hands on. Users should use caution while communicating with unknown numbers and refrain from giving out personal information to somebody they haven’t met in person.

What is End-to-End Encryption?

There have been instant messaging programs since the early days of the internet, but they were not particularly secure. One distinguishing feature was the use of plain text for all user chats. This implies that any third party or bad actor in the chain with access to the company’s servers may potentially read your chats.

Although encryption-in-transit became commonplace amongst services in the late 2000s, the service providers typically kept the decryption keys for user chats under lock and key. However, in recent years, several services have begun using end-to-end encryption (E2EE) to protect their users’ privacy and the secrecy of their chats.

If both the sender and the receiver use an end-to-end encrypted channel, only they will have access to the keys needed to decrypt the messages sent between them. Your chats are private and cannot be interpreted by the platform, your internet service provider, or any hacker who gains access to the encrypted data.

How Safe are WhatsApp Video Calls?

Video calls via WhatsApp are encrypted similarly to text messaging (more secure than other platforms, at least). WhatsApp uses an encrypted message as a “handshake” between call participants before a video call can begin.

💡 A handshake, in computing terms, refers to two different computers establishing a secure connection with each other using standardized signals. A handshake is often used in networking to verify the legitimacy of one device trying to connect to another.

You should feel comfortable confiding to the other person over a video conference. Though, keep in mind that your talk can still be secretly recorded on a screen and shared with the world. Malicious devices can also record audio and video by spying on the screen, speakers, camera, and microphone, but all this is quite rare.

How Does the Company use Your Data?

WhatsApp sends user information to Facebook Inc., now known as Meta, which shares it with various other companies. When a user contacts a business via WhatsApp, the Facebook-owned messaging app may share the user’s profile information with Facebook.

“Our Services are operated, provided, improved, understood, customized, supported, and marketed in part by third-party service suppliers and other Facebook Companies,” as stated in their privacy policy. All of the Facebook Company’s products may use this data to serve you in the future better.

For example, making recommendations tailored to your interests, displaying content and ads that are more relevant to you, and facilitating the completion of transactions and purchases. Just think of how whatever you search on Google always seems to pop up in your Facebook feed right after. That’s those cookies at work, and WhatsApp is part of the equation here.

💡 Cookies are small files that website create when you visit them. Those files are often sold to advertising companies to better market products to you. These cookies store your browsing data, such as your interests and things you liked on the site, which is of particular importance to advertisers.

Facebook insists it does not sell user information. Still, it does provide access to information to a wide variety of third parties who utilize its analytics services, advertising companies, measurement partners, partners who sell goods and services related to Facebook products, vendors and service providers, researchers and academics, law enforcement agencies and others who have legitimate requests for such information.

You now know that WhatsApp secures your messages from your smartphone to the recipients. Simply put, when you send a message, your device encrypts it before sending it, and only the recipient’s device can decode it. Even WhatsApp’s own staff is unable to read the encrypted messages.

But are the messages still safe if your gadget decrypts them? The WhatsApp messages you send from your smartphone are safe. This is since WhatsApp’s encrypted backups of your messages and media files on your Android or iOS device.

Here is something that you probably don’t know:

WhatsApp can back up data locally or to the cloud. Messages are secure whether your cellphone stores them locally or on the cloud. WhatsApp chats can be backed up to either Google Drive or iCloud, depending on whether you use an Android or iOS smartphone.

Unfortunately, your WhatsApp chats are not protected with end-to-end encryption on either the Google or Apple platforms. A keen hacker might just be able to break through and steal important data, however, security measures on their servers make it more difficult for attackers to access your information.

How to Keep your WhatsApp Data Secure

Your conversations and phone calls are encrypted and safe within the WhatsApp chat platform. App data can be backed up on Android and iOS devices, which is helpful if you need to restore your data to a different device.

Data stored in WhatsApp could be compromised if your iCloud or Google Drive backup is accessed, as mentioned above. Nonetheless, there is an answer: Backup encryption is supported but is turned off by default. Encrypting your WhatsApp backups is a must if you care about the safety of your data. Here is how to do so: 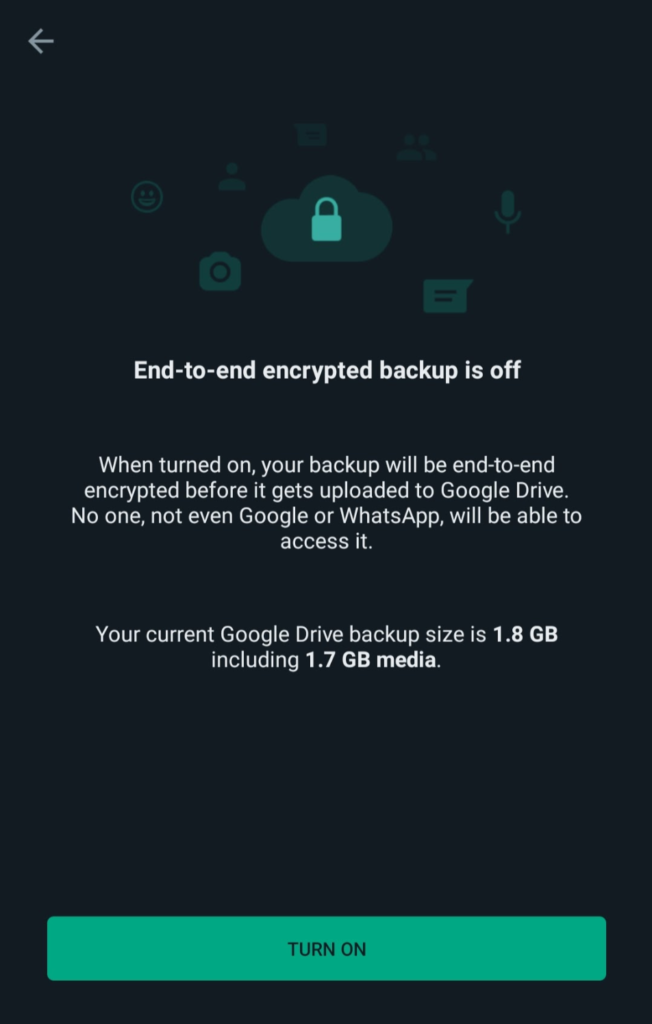 The importance of downloading WhatsApp from a secure location should never be ignored. The official release is the safest option, while APKs from third-parties could be a bit dicey. You may get WhatsApp and its updates through their official website or the app store for your smartphone or computer, such as the Apple App Store, Google Play, or the Microsoft Store.

1. Do Not Open Unknown Files

When people download and open files, specifically from unknown senders, they risk being the victim of a cyberattack or other security issues. Though you have no control over receiving such materials, you can protect yourself from infection by keeping them sealed and not opening them.

2. Be Cautious to Add Strangers as Friends

Accepting a message request from someone you don’t know is risky. Additionally, you are strongly advised not to add random people as friends. Even if you’re a largely reclusive person, you will receive the odd message from an unknown WhatsApp contact every once in a while, simply ignore it and delete the conversation. You can chose to block and report the person if you’re sure that they have malicious intents.

You may connect to many Wi-Fi networks while traveling, some of which do not require a password, especially if you’re in a public place. Stay away from the free or open Wi-Fi networks; do not connect to them. Hackers often use these networks to get into their victims’ computers or smartphones.

Many users don’t log out of WhatsApp Web after they’ve closed out the conversation, leaving themselves open to surveillance and hacking. Even though it’s on your laptop and protected by a password, that doesn’t guarantee it’s safe. If your laptop or desktop computer is online and not password-protected, hackers can easily gain access to it.

WhatsApp’s end-to-end encryption makes it more secure than most messaging services and puts it on an industry-standard pedestal. WhatsApp does not have access to your chats, only you and the person intended to receive your message can actually read it.

Nevertheless, WhatsApp has several security flaws and issues creep through the cracks just like in any other social media platform. It is up to you to exercise the best security practices and to stay vigilant in case of spam attacks. As long as you avoid suspicious links, unknown accounts, and keep encryption on, you are in the safe.