Use your computer’s built-in speech-to-text utility

Both Windows computers and Macs come with their own built-in speech-to-text utility. On Windows, the built-in voice-to-text conversion program – Speech Recognition – was first included in Windows 7 and has since been a part of every subsequent version of the Windows Operating System. OS X’s onboard speech-to-text utility, aptly dubbed Dictation, on the other hand, has been around since well before even OS X Yosemite. However, Enhanced Dictation, a feature of the utility that allows for continuous dictation, quicker speech-to-text conversion, the use of dictation commands and the ability to dictate even when you aren’t connected to the internet, was only introduced with OS X Mavericks and is only available in OS X Mavericks or later.

On OS X: How to enable Dictation:

Enable Dictation by selecting On.

Configure everything else – such as whether or not you want to use Enhanced Dictation (without Enhanced Dictation, you won’t be able to have your voice converted into text without an internet connection, among other things) and the shortcut for waking Dictation

How to use Dictation:

Navigate to a program, application or field that you can dictate text into. 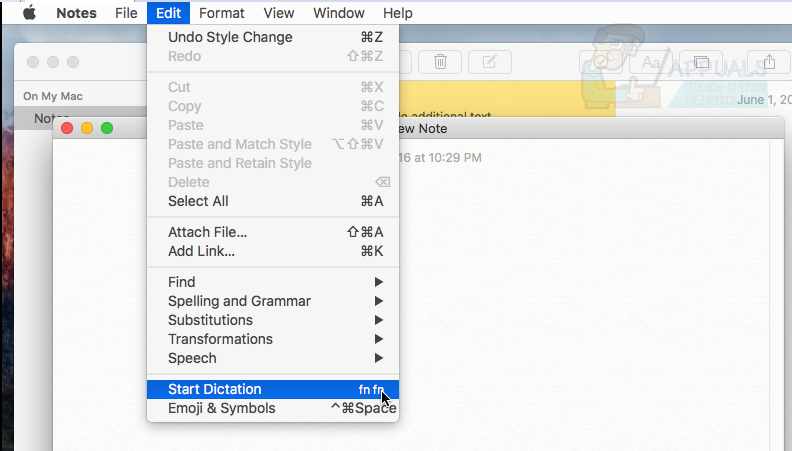 Speak, and Dictation will convert what you say into text on your screen.

To get Dictation to stop listening to you, simply click on Done below the microphone appearing on the left or right of your Mac’s screen, press the Fn key once or switch to another window.

Use a third-party text dictation program

There exist third-party programs designed specifically to allow users of computers and mobile devices to have their voice converted into text for them, and chief among these programs are the many variations of the Dragon NaturallySpeaking speech-to-text program. Dragon NaturallySpeaking is a truly immaculate speech-to-text conversion program that is second to none and has an amazing voice-to-text engine. However, with only slightly superior speech-to-text conversion accuracy as compared to its built-in counterparts and mildly impressive added features such as the ability to edit converted text with your words to boast, Dragon NaturallySpeaking may just be a tad overly expensive at $74.99 for the Home version and $300.00 for the Professional (Individual) version for computers.

How to: Use Dictation on a Mac OS X