In actuality, what happens when your computer’s screen goes from horizontal to vertical is that you accidentally press a hotkey combination – such as Ctrl + Alt + any one of the four arrow keys on your keyboard or the same with Shift instead of Ctrl (the arrow key you pressed depends on the GPU that your computer has). These two keyboard shortcuts are what toggle the change in screen orientation on almost every single GPU that supports the hotkey feature.

If you have ran into the misfortune of having your computer’s screen turn from horizontal to vertical, fear not as this can be fixed pretty easily. All you need to do is press Ctrl + Alt + a specific arrow key or Shift + Alt + a specific arrow key (the arrow key you need to press depends on the GPU that your computer has). Since you probably don’t know what arrow key you pressed the first time, keep trying either combination with each of the four arrow keys until you are successful in switching your computer’s screen orientation from vertical back to horizontal.

However, in the event that both hotkey combinations are unsuccessful at turning your computer’s screen back from horizontal to vertical for whatever reason, there is no need to panic as there are other methods that can be used to resolve this issue. The following are the most effective solutions other than the two hotkey combinations described above that you can use to turn your computer screen’s orientation back from vertical to horizontal:

Solution 1: Change your screen’s orientation from the Control Panel

A computer’s screen orientation can also be changed from the Control Panel regardless of what version of the Windows Operating System it is running on, although this solution is a bit more tedious, especially compared to rotating the screen with an extremely simple hotkey combination.

You should see a graphic displaying all of your computer’s monitors at the top of the window that pops up. If you do have more than one monitor connected to your computer, click on the monitor you want to change the orientation of in the graphic to select it.

Open the dropdown menu located directly in front of Orientation.

Click on Landscape to select it. Click on Apply. If asked whether or not you want to keep the changes, click on Keep changes. Click on OK. Exit and enjoy your now-landscape computer screen.

For users of Intel GPUs:

If your computer or laptop has an Intel graphics chip, you can rotate the screen using your Graphics driver if you simply:

Locate and click on a “Graphics Options” entry. This will launch the Intel Graphics and Media Control Panel.

Locate the setting for Rotation and open the dropdown menu directly in front of it. 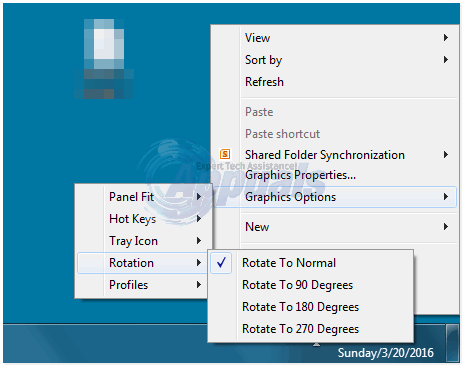 Select how many degrees your screen needs to be rotated in order to go back to being horizontal.

For users of NVIDIA GPUs:

If you use an NVIDIA GPU, you can turn your computer’s vertical screen back to horizontal from the NVIDIA Control Panel. To do so, you need to:

In the left pane of the NVIDIA Control Panel, click on rotate display to navigate to the display rotation settings.

If a message stating you can’t rotate your screen while Stereoscopic 3D is enabled, click on the link in blue and locate and uncheck the Enable Stereoscopic 3D Once you do so, click on rotate display in the left pane and you will be taken to the screen rotation settings.

If you have more than one monitor connected to your computer, choose which one you would like to change the orientation of.

Under Choose the orientation, click on and select Landscape.

Click on Apply and/or OK to apply and confirm the changes.

For users of AMD GPUs:

To change your screen’s orientation from vertical to horizontal if you are using an AMD GPU, you need to:

If you have more than one monitor connected to your computer, choose the one you want to change the orientation of in the dropdown menu located at the top of the right pane.

Under Select the rotation that you want, click on Landscape to select it.

How to Turn Your Computer’s Vertical Screen Back to Horizontal