There are more barcode and QR code scanning apps, both free and paid, on the Windows Phone Store than you could possibly decide between, so let’s make it a bit easier for you. The following are the two QR code and barcode scanning apps – one free, and the other paid – that are definitely worth your time (and money) and should be uses to scan barcodes and QR codes on a Windows 10 phone:

QR Scanner RS is ideal for any and all Windows Phone 10 users looking to simply scan a few QR codes and/or barcodes every now and then. Even though QR Scanner RS should have come with nothing but basic QR code and barcode scanning capabilities considering its $0 price tag, the developer decided to do users a huge favor by packing more features into QR Scanner RS than any other free QR code and barcode scanning app on the Store. Not only does the app let users scan QR codes, links and barcodes, it even lets them fiddle around with and adjust camera settings and choose their preferred search provider from a wide list of presets or designate their own custom search provider. 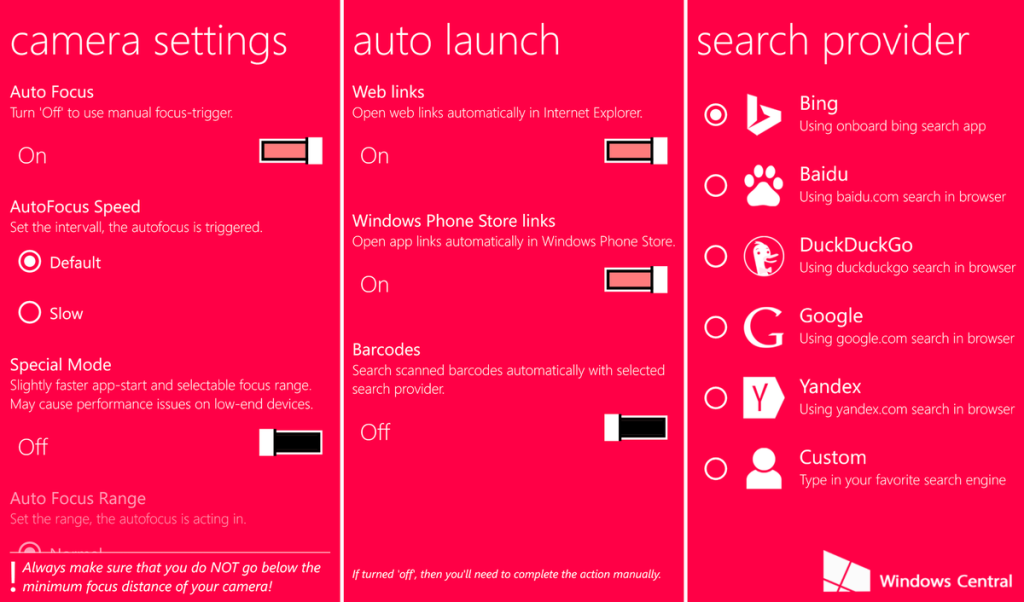 For a free app, QR Scanner RS has A LOT to offer, and the app doesn’t even have any advertisements. Since that is the case, if you happen to use the app and like it, there is absolutely no reason for you to not do the people behind the app a favor and donate $0.99 to them to show your support and appreciation. Also, giving the app a decent rating and review of the Windows Phone Store is a pretty good idea.

Many would wonder exactly why they should pay a couple of bucks for an app that is designed to simply enable their phone to scan QR codes and barcodes. However, you should rest assured as QR Scanner+ is definitely capable of making it worth your while (and your purchase). For starters, QR Scanner+ takes QR code and barcode scanning to an entirely new level and brings with it an unprecedentedly large set of settings and toggles and adjustments that the user can make, and not to mention its ability to perform scans at lightning-fast speeds through the Rapid Scan feature.

If that wasn’t enough, QR Scanner+ is capable of scanning much more than QR codes and barcodes – from URLs, vCards, meCards, bizCards, vEvents, geo-locations and e-mail addresses to phone numbers, text messages, simple text and even SEPA credit transfers (Giro code), there is definitely a lot that QR Scanner+ can do. In addition, to top it all off, QR Scanner+ not only works on Windows Phone 8.1 and Windows Phone 10 but also works on tablets and computers too. If you are not convinced of the benefits, integrity and competence of QR Scanner+ even after reading all that, the folks behind the app even offer a completely free 7-day trial that you can use to get merely a taste of what QR Scanner+ has to offer.

QR Scanner+ can be downloaded here.