PlayerUnknown’s Battlegrounds (PUBG) has become one of the most popular PC and mobile games, but many people have trouble running it at a playable (or enjoyable) framerate – especially on mobile devices. Its really recommended to have a premium mobile device when trying to play PUBG, something with one of the latest gaming SoCs, like the Qualcomm Snapdragon 845.

However, using a tweak tool for Android, you should be able to double your average framerate even on lower end devices. By “lower end” we mean something like a Snapdragon 820, not your old Samsung J1 with 1GB RAM.

Warning: Its probably not likely, but the PUBG developers may change their stance on graphics / performance tweaks tools and start banning users – they started blocking visual tweaks on the PC version, but so far the mobile version is safe.

First you need to download and install the GFX Tool from the Google Play Store.

Now follow our screenshot accordingly, and we’ll explain what each tweak will do – you can experiment if you want to see if you get better performance, but these settings have been extensively tested for best performance in PUBG. 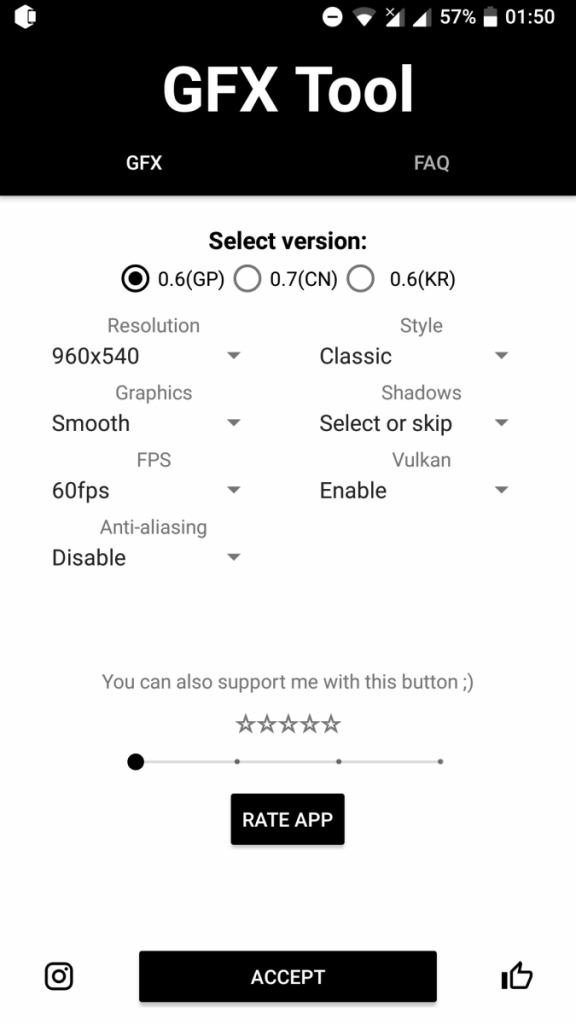 Version – As of time of writing, you should set this to 0.6, because it is the latest worldwide version available. If you choose version 0.7, it will try to request root access, because it can’t access the targeted FPS without it. Check which version of PUBG app you have installed before configuring it through the GFX Tool app.

Graphics – PUBG has a lot of graphics options in the app itself, but GFX Tool is able to access some hidden graphics options that aren’t normally displayed to the user (for example, super high fidelity graphics settings). The best setting for performance would be the “Smooth” preset, as this will lower the graphics only somewhat while giving a decent FPS boost.

FPS – This tells GFX Tool the maximum FPS you’re trying to achieve, and to not try and exceed that FPS limit. This is very useful for avoiding thermal throttling and also battery consumption. 60 is a good setting here, anything higher will produce better fluidity but consume more battery power and heat your device quicker.

Anti-aliasing – This should be disabled for a good FPS boost. It will make edges in the game appear more “jagged”, but in a fast-paced shooter like PUBG, you’re not stopping to stare at the geometry.

Style – This setting is completely negligible as it refers to the saturation and color levels in the game, though you can tweak this if you like with no performance gain or loss.

Shadows – Disabling shadows will definitely give you a high performance boost, but the trade-off is obviously losing in-game shadows. You’ll have to decide if its worth it. You can also leave it on “Skip” to let the game decide.

Vulkan – This refers to the Vulkan Graphics API usage on supported devices and enabling it can improve performance. The latest devices should support Vulkan, but if PUBG fails to launch because your device isn’t supported, you can disable this in GFX Tool.

So, after configuring everything, all you need to do is hit the “Accept” button, which will turn into a “Run Game” button. You just need to press that to launch the PUBG game app, and you should see the graphics tweaks immediately, especially if you lowered the resolution.

After following this guide, your FPS should be nearly doubled in-game during matches. If it doesn’t work at first, try rebooting your device.