Some users are reporting that their Xfinity WiFi HotSpot is no longer working. In the vast majority of reported cases, affected users are saying that the hotspot used to work before breaking abruptly. In most cases, user report that they are able to connect their devices to it, but there’s no Internet access whatsoever. But there are also cases where the user can’t connect to the hotspot network at all (mostly encountered with IOS devices). The issue is not exclusive to Windows 10 as it’s also encountered on Windows 8 and Windows 7. 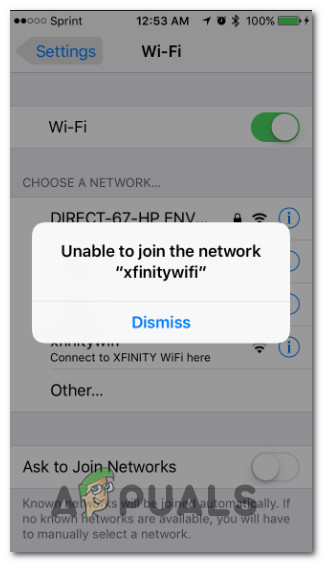 What is causing the ‘Xfinity WiFi HotSpot’ issues?

We investigated this particular issue by looking at various user reports and the repair strategies that are commonly being used to fix this problem. As it turns out, there are several potential culprits that might end up triggering this error:

If you’re currently looking for a way to resolve the same problem, this article will provide you with several troubleshooting steps that will most likely resolve the issue. Down below, you’ll find a collection of methods that other users in a similar scenario have used to fix this the ‘Xfinity WiFi HotSpot’ issues. Each potential fix that is presented below is confirmed to work by at least one affected user.

If you want to remain as efficient as possible, we advise you to follow the methods in the order that they are presented since they are ordered by efficiency and severity. One of the fixes below should resolve the issue regardless of the culprit that ends up causing it.

Keep in mind that there is a limit of devices that can become available for XfinityWifi. If the number of devices exceeds the maximum permitted number, you will be able to fix the issue by reviewing all your devices and clean up the list by removing the devices that are not being used.

Several users that have performed these instructions have reported that their Xfinity Wifi Hotspot has started working again and they were able to connect new devices to it.

Here’s a quick guide on how to clear the MAC (Media Access Control) address in association with your account:

If you’re still encountering the same issue, move down to the next method below.

Some affected users that we’re encountering the issue from a PC or laptop have reported that that the issue was no longer occurring and they were able to connect normally after using an elevated Command Prompt to flush and renew the IP configuration. This is typically reported to be effective with dynamic IP configurations.

Here’s a quick guide on renewing the IP configuration on a Windows PC:

If you’re still encountering the same Xfinity error, move down to the next method below.

If the first method didn’t allow you to resolve the issue, let’s try a different route. Some affected users have resolved this issue by using a 3rd party software called WIrelessMon – a wireless monitoring software to get the problem fixed.

This software will allow you to view the hidden SSID’s of XfinityWifi and connect to them even if they are hidden by default and don’t appear inside the list of available Wi-Fi connections.

Here’s a quick guide on how to use it:

How to Fix ‘Xfinity Wi-Fi HotSpot not Working’