To ensure the stability, security and optimum performance of Windows Operating Systems and to make sure that they are able to keep up with changing times, Microsoft regularly pushes updates to all supported versions of Windows. Windows computers receive Windows updates on a regular basis to make sure that they continue performing at their level best. As of right now, Windows updates are pushed as needed to all currently supported versions of the Windows Operating System – that includes Windows 7, Windows 8, Windows 8.1 and Windows 10. Once an update for a specific version of the Windows OS has started rolling out on Microsoft’s end, computers running on that version of Windows start receiving it and can then download and install it. 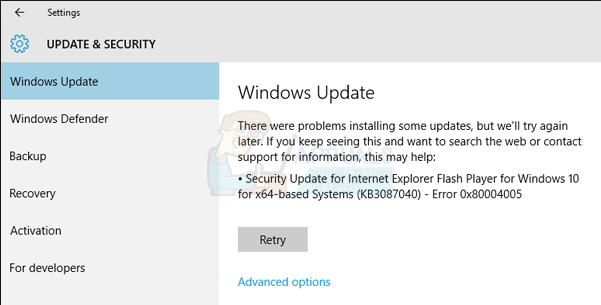 “There were problems installing some updates, but we’ll try again later. If you keep seeing this and want to search the web or contact support for information, this may help:

When an update fails to be downloaded or installed, simply restarting the affected computer resolves the issue and allows the update to be successfully downloaded and installed in most cases. However, restarting a computer affected by this problem does not help gain way towards fixing it. This problem is also not exclusive to one specific update – it can affect a variety of different Windows updates across all versions of Windows, and the problem becomes especially grave when it affects a critical Windows update the installation of which should not be delayed.

Thankfully, though, there are quite a few solutions that can be used to try and fix this issue so that the affected update(s) can be downloaded and installed successfully, and the following are the most effective ones:

This issue can often be caused by system files that are required for Windows Update to be able to download and install updates getting damaged or corrupted. In such cases, an SFC (System File Checker) scan is the way to go as it is capable of detecting damaged/corrupt Windows system files and repairing them, effectively fixing this problem and allowing the affected update to be downloaded and installed successfully in the process. If you do not know how to run an SFC scan, all you need to do is follow this guide.

Solution 2: Delete everything in %systemroot%\SoftwareDistribution\Download

An extremely common cause of this problem is a corrupt version of the affected Windows update being downloaded for some reason, leading to Windows Update failing every time it tries to install it. If that is the case, the problem can be resolved by simply deleting any and all corrupt downloads in the folder where downloaded Windows updates are stored (%systemroot%\SoftwareDistribution\Download) and then trying to download and install the affected update. In order to do so, you need to:

Note: In the directory above, X is to be replaced with the drive letter corresponding to whatever partition of your computer’s HDD/SSD Windows is installed on.

Wait for the computer to boot up, and then run Windows Update to see whether or not the affected update is successfully downloaded and installed now.

To make essential Windows updates easily accessible to all Windows users – especially those having issues with Windows Update, Microsoft also releases almost every single update that it pushes out to Windows computers as standalone update packages. If you are running into error code 0x80004005 every time you try to download and install a specific Windows update, you can simply bypass the issue by downloading the standalone update package for that specific update and then installing the update into your computer manually. In order to do so, you need to:

Note: KBXXXXXXX is to be replaced with the KB code assigned to the update you are looking for.

To significantly increase the chances of the affected update’s manual installation being a success, clear out your computer’s %systemroot%\SoftwareDistribution\Download folder using the steps listed and described in Solution 2 before you download and run the standalone update package for the Windows update you are looking for.