World of Warcraft is without even the shadow of a doubt one of the most widely played online multiplayer games in existence. Because of the growing demands of the game’s player-base and the game’s ever-evolving “world”, its developers regularly ship out updates to the game. When an update for World of Warcraft is rolled out, the “Play” button for World of Warcraft on players’ Battle.net clients turns into an “Update” button, and the update starts being downloaded and installed as soon as the player clicks on this button.

“Whoops! Looks like something broke. Give it another shot.” 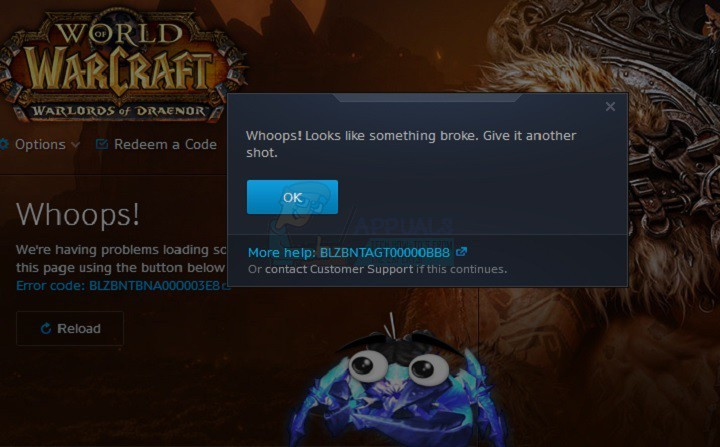 Giving it another shot, however, doesn’t work and players are left unable to play what is arguably one of the best games ever created until they or Blizzard’s Support manages to sort the problem out. Thankfully, though, you don’t necessarily have to get stuck in that spot as the following are some of the most effective solutions that you can use to try and fix this problem on your own:

Solution 2: If you’re on a wireless internet connection, switch to a wired one

Wireless connections can be pretty unstable, especially in terms of speed, which is why they are not at all recommended for playing online games let alone downloading and installing an update for an online game. If you are using a wireless connection, switch to a wired one and check to see whether or not doing so resolves the problem. If you are already using a wired internet connection, simply skip this solution and try another one.

If you are not running the Battle.net client as an Administrator, the client may not have all the permissions it requires in order to successfully download and install an update for WoW, resulting in you seeing the error message containing error code BLZBNTAGT00000BB8. To make sure that your Battle.net client runs in Administrator mode, you need to:

Once done, launch the Battle.net client and try to update World of Warcraft to see whether or not the issue has been resolved.

If some of your World of Warcraft game files have been corrupted or damaged in any way, you may see an error message containing error code BLZBNTAGT00000BB8 when you try to update the game. Thankfully, though, the Battle.net client is completely equipped to scan for and repair corrupted or damaged game files. To scan and repair World of Warcraft and its files using the Battle.net client, you need to:

Solution 5: Delete the “Indices” file and then scan and repair World of Warcraft

This solution has the highest success rate out of all the solutions to this issue listed and described here, often being referred to as “a work of magic” and “miraculous” on various World of Warcraft forums. In order to apply this solution, you need to:

Once the scan is done, you should be able to successfully update and play World of Warcraft.

Solution 6: Uninstall and then reinstall both Battle.net and World of Warcraft

How to Fix Error World of Warcraft error blzbntagt00000bb8