Several Windows users are reporting that they are unable to boot up normally anymore. During the booting sequence, the startup sequence is interrupted by a BSOD (Blue Screen of Death) pointing towards aswNetSec.sys as the file responsible for the critical system crash. Some users are reporting that they can boot in Safe Mode without networking. The issue is mostly reported on Windows 10, but it’s not exclusive to this Windows version as we also managed to find occurrences on Windows 7 and Windows 8.1. 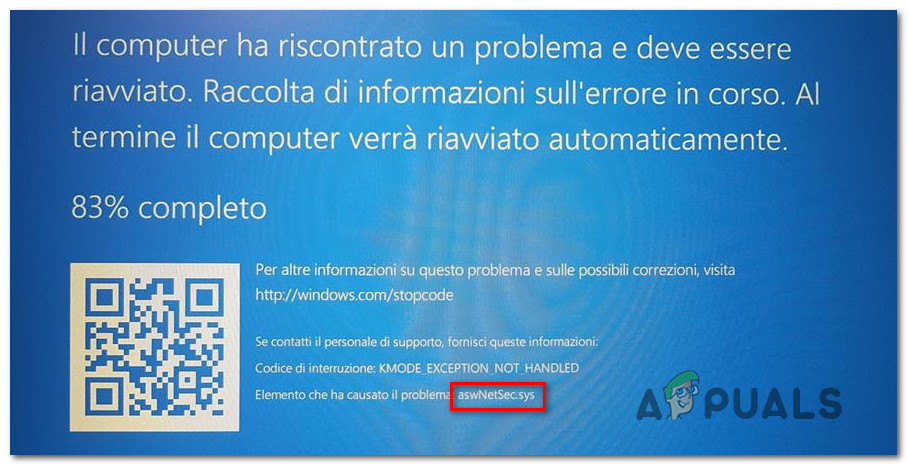 What is causing the aswNetSec.sys BSOD?

We investigated this particular issue by looking at various user reports and analyzing the most popular fixes that affected users have been using to resolve this particular error message. As it turns out, several different scenarios might trigger this type of BSOD. Here’s a list of culprits that might cause this type of critical crash:

If you’re currently struggling to resolve the same aswNetSec.sys BSOD crash, this article will provide you with a couple troubleshooting guides that have been confirmed to be effective. Down below, you’ll find several different potential fixes that other users in the same situation have successfully used to stop the BSOD crashes from happening.

To remain as efficient as possible, we encourage you to follow the methods below in the same order that we arranged them in. Eventually, you should stumble upon a fix that will resolve the issue regardless of the culprit that’s causing it.

As it turns out, the number one cause why this issue is occurring is due to a problematic Avast driver that ends up conflicting with some kernel files used dooring the booting sequence. Unfortunately, if you encounter this issue, the only way you’re going to resolve the issue is likely by getting rid of the 3rd party security scanner and moving towards the built-in antivirus (Windows Defender).

Whether is Avast or a different 3rd party AV client, you’ll need to boot in Safe Mode without networking to bypass the BSOD crash triggered by aswNetSec.sys.

If the same BSOD crash is still occurring, move down to the next method below.

If the method above didn’t allow you to resolve the issue, chances are the issue is occurring due to some underlying system file corruption that will not go away so easily. In this case, chances are you will be able to stop the aswNetSec.sys BSODs by resetting every WIndows component along with all booting data.

The most popular way of doing this is with a clean install. But this procedure is quite destructive since it will make you lose all your data including applications, games and personal media (photos, videos, audio files, etc.).

A better and more efficient way is to do a repair install. This will reset all Windows components and boot data while allowing you to preserve your files, applications, and games. If you decide to go for a repair install (in-place repair), follow the steps outlined in this article (here).

How to Fix BSODs caused by aswNetSec.sys