Windows 10 users trying to back up system images of their computers to NAS (Network-Attached Storage) have often reported seeing the backup fail and an error message that states the following appear:

“There was a failure in preparing the backup image of one of the volumes in the backup set. Details: The I/O operation has been aborted because of either a thread exit or an application request.” 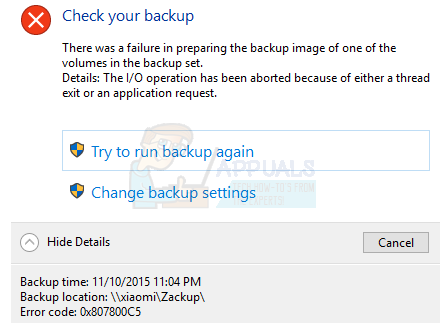 When a user who runs into this error message clicks on Show Details in the dialog containing the error message, the error code for the problem is revealed to be 0x807800C5. This issue only occurs when trying to back up a system image of a Windows 10 computer to NAS – meaning that the backup goes through successfully when backup up a system image to a drive (internal or external) that is physically and directly connected to the computer. In addition, users affected by this issue are almost always able to successfully back up one system image of their Windows 10 computer to NAS – it is when they try to do so a second time that the process fails and they see the error message.

The cause of this issue is the fact that Windows only allows one system image to be backed up to NAS, and Windows 10 (unlike older versions of the OS) is incapable of overwriting or deleting the first system image, ultimately causing the second image backup to fail. That being the case, you can resolve this issue by simply renaming the original backed up system image so that Windows is able to successfully create the new system image. In order to do so, you need to: