Computers running on the Windows Operating System can be put into Sleep mode – an extremely-low power state that is designed to save tons of energy and resources, all the while keeping the computer running. When a Windows computer is put to sleep, the user’s session is simply paused and the computer goes down into a state in which only core processes are running and everything under the computer’s hood (the processor and the RAM, for example) is running at minimum capacity, saving a lot of power in the process.

Putting a Windows computer to Sleep saves a ton of power, and resuming the paused computing session is extremely simple – just move the computer’s mouse, press any key on the computer’s keyboard or (in the case of some computers) press the computer’s Power button, and the computer will wake up exactly where you left off. However, many Windows Vista/7 users suffer from an issue with the Sleep function where their computers are almost always brought out of the Sleep state by their internet connection – the internet modem or dongle that is connected to their computer via the computer’s network adapter. 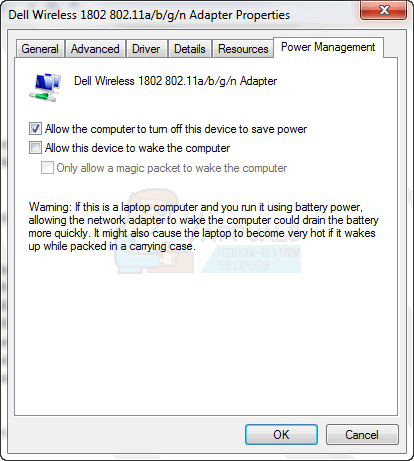 Having your computer automatically wake up after you put it into Sleep mode is definitely an issue because that defeats the entire purpose of putting computers into Sleep mode in the first place. Thankfully, though, there is a way for Windows Vista/7 users to configure their computers to not allow their internet connection to wake their computers up when they are in Sleep mode. In order to make sure that your internet connection no longer wakes your Windows computer up from Sleep, you need to:

If you performed each and every single one of the steps listed and described above perfectly and everything went well, your internet modem/dongle/connection will no longer be able to wake your Windows Vista computer up from Sleep.

How to Disable “Allow This Device to Wake the Computer”