A lot of users have been reporting that Shockwave Flash is frequently crashing in Chrome under Windows 10 regardless of the website or type of content that is being viewed. The issue seems to be exclusive to Windows 10 and is not only limited to Insider Builds and Technical Preview builds. While some users report that this issue occurring only with the Chrome browser, others report that this is a system-wide issue, even affecting Microsoft Edge and Internet Explorer. 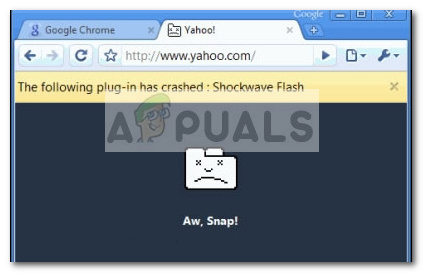 On older Windows versions,  Flash crashes like this would happen because two Flash versions were running at the same time. In addition to Chrome’s own version of Flash, most computers had another Flash installation that was pre-installed, bundled with other software or downloaded from Adobe’s website. What would happen is the two Flash versions would trip each other causing a crash and an unresponsive period of the browser.

However, this should no longer be an issue since Google Chrome got smart enough to disable itself when it detects a system-wide Flash installation. But this is only true if you have a new enough Chrome version.

If you’re currently struggling with this issue, this article will provide you with a list of effective troubleshooting steps. Below you have a list of methods that other affected users have used in order to resolve the issue. Please follow each potential fix in order until you discover a solution that fixes the Shockwave Flash Player for you. Let’s begin.

Before you do anything else, let’s make sure that Google Chrome is smart enough to disable the built-in Flash version if it detects that there’s another system-wide Flash enabled.

Keep in mind that the older Google Chrome version would force the built-in Flash version even while the system-wide Flash was running. This would end up creating crashes, unresponsive periods and general browser instability. Since Google has fixed this glitch, updating your browser to the latest version should resolve the issue if this is causing the crash.

Here’s a quick guide on updating Chrome to the latest version:

Depending on what extensions you’re using, it’s entirely possible that one of your active extensions is interfering with Flash. Fortunately, it’s quite easy to test if this is your culprit – by starting Chrome with all extensions disabled.

Here’s a quick guide on disabling all extensions and figuring out which one is causing the problems with Shockwave Flash:

If you are using an insider build, you could be dealing with a glitch that is causing your Shockwave Flash to crash. A lot of users have been reporting Flash problems on builds 10130 and 10147. If you haven’t performed the latest updates available, we strongly recommend that you do and see if the issue resolves itself.

Here’s a quick guide on making sure your Windows 10 is up to date:

Some users have reported that this particular Flash Shockwave clash can also be caused by an incompatibility between a dedicated soundcard and Windows 10. This occurrence is reported to mostly happen with Realtek drivers and is usually reported right after the user upgrades to Windows 10 from an older Windows version.

The fix for this particular issue is to update your audio drivers to the latest version available. As of now, most incompatibilities with Windows 10 have been fixed so you should be able to resolve the issue by making sure you have the latest sound drivers. Here’s a quick guide on how to update your dedicated sound card drivers:

If you’re still getting Flash crashes in Chrome, move down to the next method below.

If you’re only getting Flash crashes in your browser while using headphones, you might fix the issue by changing some settings in the Sound menu. One user that has been only dealing with this issue while using a headset has managed to resolve the issue by enabling Dolby Audio and modifying the Quality Format. Here’s a quick guide on how to do this:

If you’re still dealing with frequent Flash crashes inside Google Chrome, move down to the next method.

If you’ve come this far without a result, one final solution that will allow you to play Flash content without frequent crashes is to change the browser. But this is only true if your problem is only occurring with Google Chrome (not system-wide).

If you are prepared to trade Chrome for a more stable browser when it comes to Flash content, you can use Internet Explorer, Firefox or Opera. Experiment with these options and see which browser is closer to what you need for your web surfing experience.

In the event that you insist on using Google Chrome, move down to the final method.

Some users have managed to resolve the issue and stop the frequent Shockwave Flash crashes in crome by reinstalling Windows. Although this is quite a drastic approach, you can limit the damage by performing a repair install. This will allow you to preserve your personal files as well as the installed applications.