Reddit’s motto is “the front page of the internet” – while the website’s motto holds true, the website’s infrastructure itself is a bit underwhelming even though Reddit has one of the largest user bases of all the websites that exist on the World Wide Web. Redditors – patrons of Reddit – often run into an array of different errors trying to access content on Reddit, and Reddit because of its relatively frail infrastructure the website is also prone to occasional outages where all or a portion of the website’s users lose access to Reddit and the content on it. Error 503 is among the most common errors that Redditors report facing. 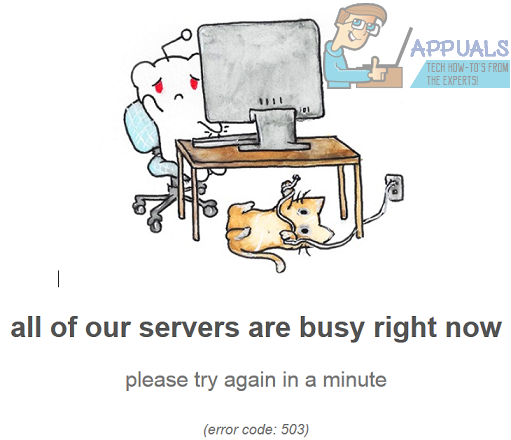 The following are the solutions you can use to try and resolve error 503 and restore your access to the wondrous world of Reddit:

If you’re using Reddit on mobile and are getting error 503, you might be able to get rid of the error by simply uninstalling the Reddit app and that reinstalling it from the Google Play Store (if you’re using an Android device) or the App Store (if you’re using an iOS device). For mobile users, there exist a multitude of different third-party applications that they can use to access Reddit instead of the official Reddit app – if you use such an app and are getting error 503, reinstall that app or try accessing Reddit using the official mobile app.

Solution 3: Wait out the storm

There’s a chance you’re getting error 503 while trying to access Reddit because of some issue on your end. However, there is also a chance you’re getting error 503 because of something on Reddit’s end – all of Reddit’s servers being overloaded with traffic and being busy or one of Reddit’s infamous server outages where Redditors lose access for hours on end. You really wouldn’t expect a website of Reddit’s magnitude to be prone to such problems, but this is, unfortunately, the case. If the culprit is an issue on Reddit’s end, all you can really do is wait for the problem to be fixed and hit F5 every couple of minutes to refresh the Reddit page you are trying to access and see if it loads up.

You can check to see if Reddit is experiencing any kind of problems or excessive traffic or if there’s an outage here, and the Reddit team also announces and updates users with the status of any major outages on this Twitter.

Kevin is a dynamic and self-motivated information technology professional, with a Thorough knowledge of all facets pertaining to network infrastructure design, implementation and administration. Superior record of delivering simultaneous large-scale mission critical projects on time and under budget.
Social Media
Back to top button
Close
Close
Close