Players experience a Bad Module Error when playing PUBG particularly after the Windows Creators update 1709. Since then, players playing PUBG, CS Go, and Fortnite have reported this error message every now and then. The main reason for this error are the mechanics and the modules involved in making the game run on your computer powered by Windows itself. The full message of the error is “bad_module_info has stopped working”.

You may think that since PUBG has its own launcher, it doesn’t have anything to do with various Windows libraries and modules. It doesn’t work that way; each game makes use of a predefined mechanism implemented in Windows and taking them as their main framework and they perform their operations there while running the game.

Windows has a feature called ‘Fullscreen optimization’ which allows the operating system to improve the game quality and the performance when the game is running in full-screen mode. Since PUBG is mostly set in being played on a fullscreen, this mechanism comes into play and tries to optimize it. In lieu of the Windows update 1709, there are many reports that this causes the error message.

We can try to disable the fullscreen optimization and see if this fixes the issue for us. Do remember that disabling this option will decrease your FPS but you will at least be able to play.

PUBG officially acknowledged the error message and also prompted that it wasn’t the only game affected by the Windows update 1709. According to PUBG: 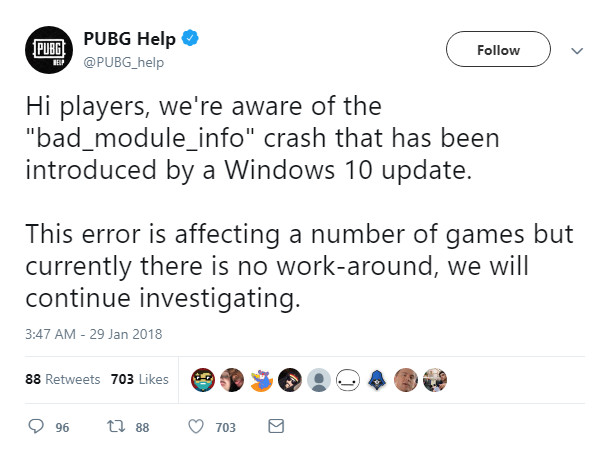 At the time of posting, there were no possible workarounds for the situation. This error was quickly noticed by Microsoft engineers who then later released several software updates to fix the error message. Following Microsoft, PUBG also updated the game to fix the issue and make sure it doesn’t happen in the future.

So if you are experiencing this error, it probably means that you do not have the latest version of Windows installed. In this case, we will recommend that you update Windows in the as soon as possible using the steps below.

After the update is installed, restart your computer and launch PUBG again.

In addition to Windows, also make sure that you have the latest version of PUBG installed.

The Game Bar is a new feature introduced in the recent Windows 10 updates. This feature detects the played game automatically and launches a ‘game bar’ at the center bottom of the screen and enables you to record, capture, or take pictures of your gameplay using hotkeys. It can easily be accessed in-game by pressing Windows + G whenever playing any game either inside or outside the Xbox application.

This feature is known to cause several bugs and hamper the operations of the game. We can try to disable this and see if this does the trick. You can always enable it back on if this doesn’t work in your case. The ‘gamebarpresencewriter.exe’ executable is the main service of the game bar. You can disable it using the steps listed in the article.

In addition to the above methods, you can also try: