I can’t think of many phones that had a better launch than Samsung Galaxy S6. For the most part, the phone received positive reviews from critics, who were impressed by the devices’ upgraded build quality over prior models. This coupled with serious improvements to the display, camera, and performance ensured that countless hordes of Android fans brought it within weeks of the initial launch.

But the good PR didn’t stop users from returning faulty S6 and S6 Edge devices. All the newest Android features won’t amount to anything if your device refuses to charge or turn on. As with all manufacturers, Samsung had some bad apples in their production line. Soon enough, users began reporting that their brand new Samsung Galaxy S6 is refusing to charge after just days of use.

If you have this problem, you might be tempted to believe it’s surely a battery issue – in some cases it really is, but the issue can originate from a lot of different places. It could very well be a charging port issue or even a firmware glitch. Here’s a list with some of the most common causes that will render your Galaxy S6 unable to charge:

Now let’s get to making your Galaxy S6 run again. If your phone is suffering from a hardware issue, there’s little you can do besides taking to a certified service or a technician. But let’s not think of the worst and troubleshoot every potential problem we can fix ourselves.

Below you have a collection of fixes proved to be successful making Samsung Galaxy S6 charge again. Please follow each method in order as they are ordered by frequency and severity. Start with the first one and work your way down until you find a guide that solves your problem.

If the troubleshooting steps above didn’t trigger any charge, proceed to next method. However, if your phone is charging while connected to the USB port proceed straight to Method 4.

Faulty batteries are among the most common causes for making Galaxy S6 devices unable to charge. This is unlikely to happen on new phones, but if you bought a used S6 chances are the battery has degraded to the point where it’s unable to accept a charge.

Common signs that your phone is suffering from a faulty battery are random restarts, excessive heating of the device and screen flickering.

Since Galaxy S6 is not equipped with a removable battery, taking it out to take a look it’s not an option. What you can do is inspect the back case – Does it appear to be bloated or swollen like something is pushing the back case out? If the back case looks budgeted, it’s most likely because your battery has become larger than its normal size. This it’s a clear indicator that you need a replacement. 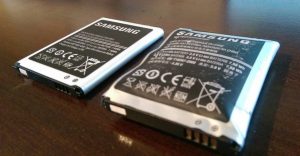 Note: If you have a bad battery, take it to an authorized service or technician immediately as it has the potential of causing even more problems to your device.

This is the equivalent of physically removing the battery from your device. But since the S6 doesn’t ship with a removable battery, we will perform a hard reboot. In situations where the device becomes unresponsive, Samsung advises users to perform a “simulated battery removal“.

If your device doesn’t charge, let’s make sure it’s not a glitch that rendered your device unresponsive. Here’ what you need to do to make sure your device is not frozen:

The charging port is quite vulnerable on all phones that use wired charging, not just the S6 model.

If you carry your S6 device in your pocket frequently, here’s what to do to remove any lint or dirt accumulation:

Most of us accidentally plug the micro-USB port upside down from time to time. If you do this frequently, you’ll end up forcing the internal pins and push them inwards to the point where the transfer of electricity can’t happen.

This following method should only be performed on phones that don’t have a viable warranty as it runs the risk of voiding it. It also runs the risk of damaging your device even further. If you don’t need to take risks, it’s best you send it straight to a technician. Here’s what you need to do:

If you went through all the methods above without a result, I advise sending your phone to a certified technician. Your Galaxy S6 might be suffering from a hardware failure, or, in some extreme cases a firmware glitch (in which case you need to re-flash).