Skype has an undergoing problem where some users are unable to join calls (particularly group calls). This can happen because the latest versions of Skype include some changes that we’re supposed to improve video calls and group video calls. Unfortunately, this also created problems on older PCs that don’t have SSE2 (Streaming SIMD Extensions 2) support.

The most common symptom of this issue is when the call invitation shows up on the mobile version of Skype but nothing shows up on PC. The user can manually press the Join ongoing call button in the conversation window, but the conversation will automatically close within seconds without hearing any audio from the other participants.

Unfortunately, there isn’t much you can do if the issue is indeed caused by the lack of SSE2 support on your PC – but keep in mind that this scenario is only applicable if you’re unable to join group video calls and your computer’s processor is older than 8-9 years. If you’re encountering this issue with regular audio calls or group calls, it’s likely that the issue is caused by a Skype glitch or due to a privacy setting of the call host.

If you’re currently struggling with this particular issue, troubleshoot for potential culprits using the potential fixes below. Please follow each method in order until you encounter a fix that works for your situation.

Method 1: Use the latest desktop version of Skype

If you’re on Windows 10, you’re probably using the built-in Skype version. While this version is certainly more convenable, it’s not as streamlined as the desktop version of Skype and is known to cause a whole suite of unforeseen glitches.

Some users have been able to restore the normal functionality of Skype by avoiding the built-in version of Skype and installing the desktop version. To do this, visit Skype’s download page (here), click the drop-down menu under Download Skype and choose Get classic Skype. 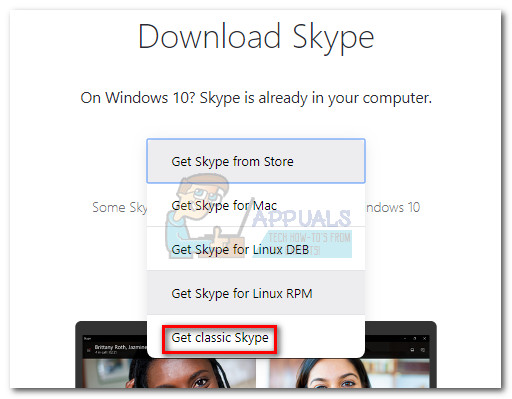 Method 2: Ask call host to add you to Contacts

This particular issue can also be related to a certain privacy setting of the person that is hosting the group call. To test this theory, see if the person that initiated the group call has added you to their contact list. If you aren’t in their contact list, ask them to add you manually and invite you again. They can do this easily by visiting your profile page and clicking on Add to Contacts.

If the issue was indeed related to a privacy setting on their part, adding you as a contact should automatically resolve the issue and you should be able to participate in the group call normally.

This will not enable you to join a group call, but you’ll at least be able to communicate with multiple participants until Microsoft decides to fix this problem for everyone. To do this, go to Contacts and select Create New Group. 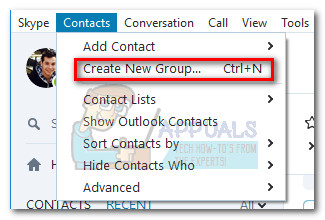 Then, hit the Add people icon and add all the people that you want participating in the group call. Once all the participants have been added to the group, click the Call Group icon to initiate a group call. 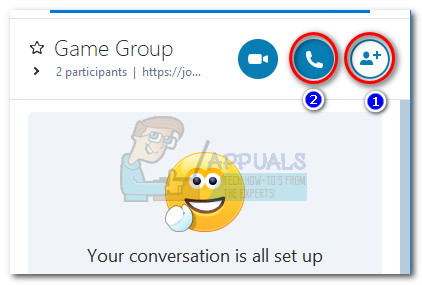 If the steps above are also leading to the same issue, follow Method 4 for a different way of joining a group call.

Method 4: Use the /golive command

If all the methods above have been unsuccessful, let’s try a more technical approach. Some users have been successfully able to join an ongoing group call using the /golive command. Here’s a quick guide on how to do this:

If you’re still struggling with the same issue, follow the final method to downgrade your current Skype to a previous version.

Method 5: Downgrading to an older version

If all the methods above have failed to allow you to join an ongoing group call, downgrading to an older version of Skype might just do the trick. If your issue has resulted from the glitch that has been going around starting with version 7.0.85.100, downgrading to an older version will solve your group calling problems. Here’s a step by step guide:

If you’ve burned through all the methods without success, go to this Microsoft link (here) and open a support ticket for Skype. As of know, there are a lot of unresolved tickets related to this particular issue. Following Microsoft’s logic in previous matters, the company is bound to release another hotfix once enough people report the problem with this new build.