Some users have been reported BSOD (Blue Screen of Death) crashes with the 0x0000003b stop error code. For some users, the issue seems to happen randomly while others report that the problem is occurring only when their PC has to perform a stressful activity. 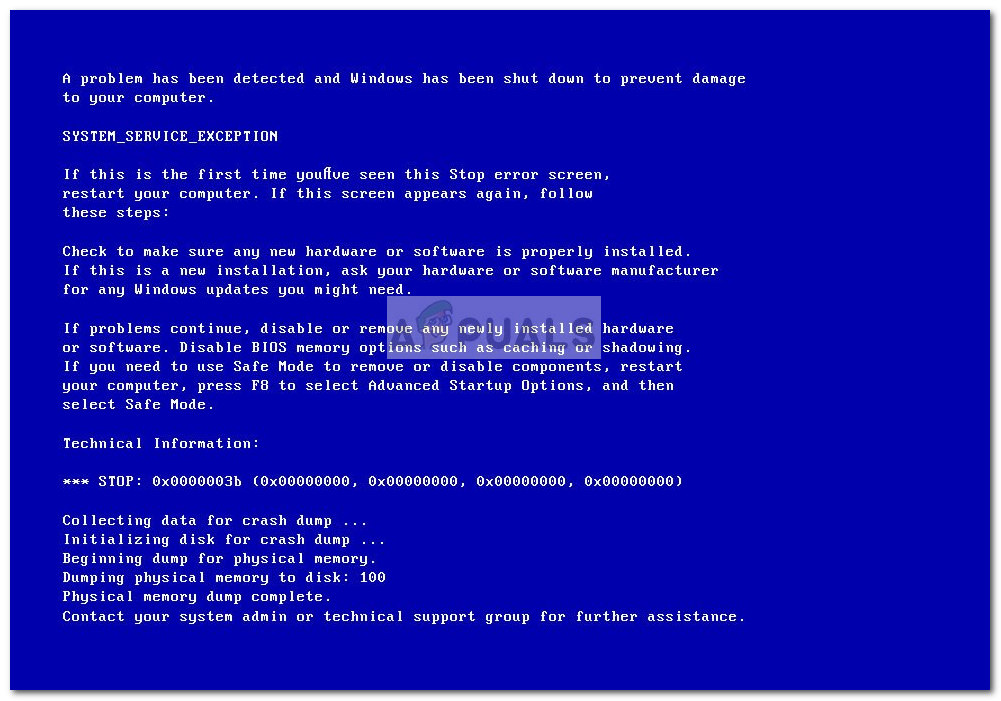 BSOD crashes with the 0x0000003b stop error code can be caused by hardware problems, 3rd party programs, and driver incompatibilities. However, the most likely cause (besides a hardware problem) is a particular driver file of Microsoft IEEE 1394. Corruption inside a FireWire device driver will cause the system to crash with the 0x0000003b stop error code.

If you’re currently struggling with this particular issue, the methods below might help. Below you have a collection of fixes that other users have used to remedy the issue. Please follow each potential fix in order as they are ordered by severity. Go through each applicable method until you encounter a fix the resolves the problem in your particular situation.

Some users have managed to mitigate the problem by updating the wireless card drivers. Apparently, 0x0000003b BSOD are quite common on Windows 10 laptops that are working with updated wireless drivers. Apparently, the issue only happens while the laptop is connected to the internet via a Wireless network and doesn’t happen while a wired connection is active.

If you’re suspecting that this might be the cause of the 0x0000003b BSOD crashes, follow the guide below to make sure that you have the latest wireless card driver:

Some users have reported that they were successful in preventing the BSOD with the 0x0000003b stop error from occurring by removing and then switching places of the RAM modules. Of course, this is only applicable if you’re using two different RAM modules.

Note: If you’re only using one RAM module, remove it and insert it in a different slot.

This might seem like a useless fix, but there’s actually some science behind it. Typically with old RAM modules, the connectors will become dirty (or oxidized). Removing and then re-inserting the RAM modules in a different place generates friction capable of scraping off the oxidized material – doing this will end up providing better electrical connectivity, restricting the possibility of crash generated by the RAM modules.

Once you have removed the RAM modules, start monitoring your PC and see if the 0x0000003b BSOD crash returns. If it does, move down to the next method below.

The people behind Malwarebytes promptly reacted with a fix that should take care of the problem. If you want to keep Malwarebytes on your computer, visit this link (here) and download the latest version available. Then, open the installer and follow the on-screen prompts to complete the installation.

You can also remove it completely remove the Malwarebytes software from your system and see if the 0x0000003b BSOD crashes return.

Method 4: Applying the hotfix (Windows 7 only)

There is a well-known bug in Windows 7 computers that will make certain systems crash with a 0x0000003b BSOD. This frequently happens if the computer uses IEEE 1394 devices (Firewire devices). The stop error message that is received along with the error looks like this:

Microsoft is aware of this issue and has readily released a hotfix capable of resolving the issue. If you are on Windows 7 and the error featured above is similar to what you are seeing, you can try downloading and installing the following hotfix (here). Simply agree with the ToS by clicking I Accept. Once the hotfix is downloaded, apply it on your system and restart your computer.

If all of the methods above have proved to be ineffective, the last resort solution would be to do a clean install. This will likely deal with any software problem that might be causing the issue.

If you want to keep some of your data and you are using Windows 10, you can follow this guide (here) to reset your PC and keep your personal files. Additionally, you can perform a clean install using this guide (here) and do a complete refresh.

After you have reinitiated your operating system, see whether the 0x0000003b BSOD crash returns. If it does, the issue is definitely caused by a hardware problem.