Some users have reported frequent BSOD crashes that point towards APC Index Mismatch as the main culprit. Most affected users report that the BSOD crashes occur for no apparent reason. Most of the time, BSOD a crash that points towards the APC index mismatch in the dump file is regarded as a hardware issue, but that’s not always the case.

A lot of software (drivers and third-party applications) might contribute to a BSOD crash caused APC Index Mismatch. A fairly common trigger of the APC Index Mismatch BSOD is when users are trying to use a webcam with Skype. Other users report that they usually get BSOD APC Index Mismatch crashes when playing video games or performing another resource demanding activity.

APC is an acronym for Asynchronous Procedure Call – a function that is designed to run outside and separately from the main program when certain circumstances are met. This is why BSOD crashes pointing towards the APC Index Mismatch as the culprit will only occur after or during the boot process.

The error APC Index Mismatch is generally an indicator that there is an inconsistency in the number of processes that entered an area of operations where the program is running and the number of processes that left. The error APC Index Mismatch is essentially the operating system telling you that no software can run without risk of damaging the system – hence the BSOD (Blue Screen of Death) crash.

If you’re currently struggling with regular APC Index Mismatch BSOD crashes, the following fixes might help. Below you have a collection of methods that other users in a similar situation have used to resolve the issue on their side. Please follow each method in order until you encounter a fix that is effective for your particular situation. Let’s begin

If your system crashes with the APC Index Mismatch BSOD while using your webcam through Skype on Windows 10, the fix is extremely easy. You’ll just need to apply all Windows update that is currently pending.

Initially, the APC Index Mismatch error associated with Skype was produced by an internal bug introduced with a Windows update. Luckily, the glitch was promptly fixed – first by a Fast Ring build and since the beginning of 2018 by a standard Windows Update.

To update your Windows 10 OS to the latest version, open a Run box by pressing Windows key + R. Then, type “ms-settings:windowsupdate” and hit Enter to open the Windows Update screen. Finally, click on Check for updates and follow the screen prompts to install all pending updates. Depending on how many pending updates you have, your PC might restart on several occasions. 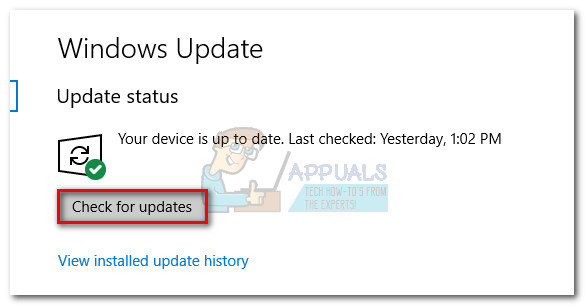 Apparently, the APC Index Mismatch can be caused by an outdated or corrupted Realtek High Definition Audio Function Driver. Some users finding themselves in a similar situation have managed to prevent the BSOD APC Index Mismatch crashes from occurring again by reinstalling the Realtek audio driver.

If your BSOD APC Index Mismatch is pointing towards the RTKVHD64.SYS, a trip to Realtek’s download page will probably stop the BSOD crashes from occurring again. To do this, visit this link (here) and download the latest version of the Realtek High Definition Audio driver according to your OS architecture.

Once the driver is downloaded, follow the on-screen prompts to install it on your system, then restart your system to complete the process.

At the next startup, monitor your PC for any BSOD crashes. If they are still occurring, move down to the other methods below.

If you are suspecting that the issue is caused by your audio driver, there’s one more repair strategy that seemed to have yielded results for a lot of users in a similar situation. As it turns out, certain laptop models will BSOD crash with the APC Index Mismatch when the Audiodg.exe file is used. This is a typical occurence with Dell models.

Some affected users have discovered that uninstalling the Realtek Audio driver and using the Windows Base Audio driver made the BSOD crashes stop. Here’s a quick guide on how to do this:

If you continue to get the same APC Index Mismatch BSOD error followed by a crash, continue with the other methods below.

Method 4: Making sure all drivers are properly installed

To exclude the possibility of a faulty driver causing the issue, let’s make sure that all installed devices are using proper drivers. The quickest way to do this is via Device Manager. Here’s a quick guide on making sure that all your drivers are properly installed:

If this method wasn’t applicable or you’re still encountering the APC Index Mismatch even after updating all your drivers from Device Manager, continue with the method below.

A number of users have reported that the APC Index Mismatch BSOD crashes have entirely stopped after they uninstalled the Display Link drivers.

DisplayLink can be a great software to use if you want to use an additional monitor for increased productivity. However, there are a lot of reports of incompatibility issues leading to BSOD crashed on Windows 10. Some users struggling to stop the APC Index Mismatch BSOD crashes from occurring have managed to resolve the issue by uninstalling the DisplayLink driver. Here’s a quick guide on how to do this:

At the next startup, see if the APC Index Mismatch BSOD crashes have been resolved. If you still experience the same symptoms, move over to the final methods.

Method 6: Revert to the default RAM, CPU or GPU frequencies (if applicable)

As expected, this issue can also be caused by a malfunctioning hardware piece. Most of the time, instability among the hardware components is caused by overclocking. If you don’t know what overclocking is, your sistem is most likely not overclocked.

But if you overclocked your CPU, GPU or RAM frequencies, you might want to revert to the default frequencies and see weither you experience the same BSOD APC Index Mismatch BSOD crashes. If you find that your system no longer crashes while the stock frequencies are enforced, you can begin to slowly raise the frequencies again (but don’t go near the previous threshold).

If you don’t have an overclocked system or you’ve determined that the custom frequencies where not causing the APC Index Mismatch BSOD crashes, move over to the final method.

After trying out every workaround in the book, some users have decided to go through performing a clean install (or reset). While this is less than ideal, it seemed to work for a lot of users that weren’t left with any choice.