Windows 10’s Creator’s Update shipped with a lot of new features and bug fixes that have been long expected by users. But one feature that hasn’t received that much attention is Sonic – a Microsoft-developed surround emulator capable of delivering spatial sound even on budget headphones.

Windows Sonic seems to be Microsoft’s version of Dolby Atmos – the other spatial sound client that was made available along with the Creator’s Update. However, one huge advantage of Sonic over Dolby Atmos is that the first doesn’t require a subscription payment.

What is spatial sound?

Windows Sonic is Microsoft’s solution for adding spatial sound support on Windows 10. Spatial sound is meant to enhance the audio quality of your headphones and creates a 3D-like sound experience. It does this by incorporating both traditional surround sound and elevation (above or below the listener). The audio is no longer split into multiple channels (traditional surround sound). With spatial sound, developers can position audio objects that emit sounds in 3D space. While this might not make a huge difference in music and movies, it works brilliantly with games.

You don’t even have to own a high-end pair of headphones to make use of Windows Sonic. The technology is supposed to transform even the blandest pair of headphones into an immersive experience. However, the differences might not be that noticeable with low-end headphones.

Before you start following the guide below, make sure you have already applied the Creators Update on your Windows 10 version. Otherwise, some of the settings below will not be visible.

In addition to that, make sure that you don’t have any software installed that might be applying audio effects. Having additional sound effects enabled while using Windows Sonic might end up lowering the audio quality since the sound will be processed twice. 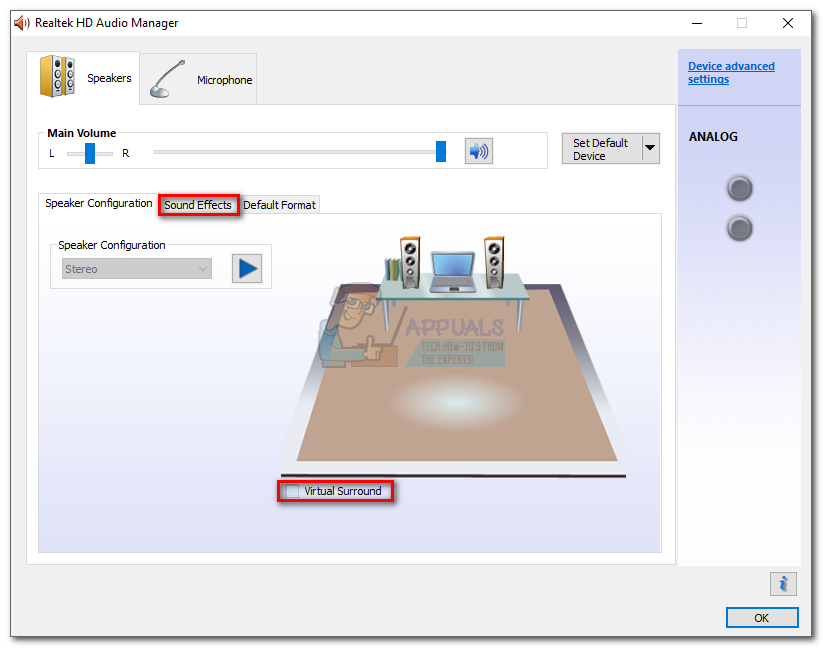 Note: A lot of motherboard manufacturers will automatically include an audio manager for the onboard sound card (Realtek HD Audio Manager is the most common occurrence). Some of these audio managers will install with a few sound effects already enabled. If you use an external audio manager, open it and make sure virtual surround, as well as any other sound effects, are disabled.

Once the Creators Update is applied and all other sound effects are disabled, follow the guide below:

That’s it. Windows Sonic for Headphones is now enabled on your system. But keep in mind that spatial audio will only stay active as long as you keep using the same pair of headphones. If you upgrade to another headset, you’ll likely have to repeat the above steps again.

Keep in mind that the efficiency of Sonic (and Dolby Atmos for that matter) is dependent on the quality of your headphones and your sound card. While you’ll most definitely going to notice an improvement in the perceived depth and audio quality, this will not work as well on all media types.

Sonic can only do so much when having to virtualize a stereo source. However, it will improve positional accuracy by allowing the signal to traverse more smoothly from left to right and vice versa, with almost every pair of headphones. But a true spatial 3D audio can only be achieved via Sonic if the audio engine of the media supports it natively. And so far, there have been few developers who have jumped into Sonic’s boat.

We tested Windows Sonic with a pair of Sony Gold Wireless Stereo Headset. When Sonic spatial sound was enabled, there where some noticeable differences, especially with games and other Dolby Atmos-encoded media – sounds could be pinpointed with enhanced accuracy and we also felt an improvement on the perceived depth of the sounds. However, we then played the same media using Dolby Atmos for Headphones, and we honestly couldn’t notice any differences between the two.

Audio quality can be highly subjective, so we can’t really designate a clear winner between Windows Sonic for headphones and Dolby Atmos for headphones. But it’s clear that you’ll get better audio quality if you decide to use one of the two options.

The general consensus on audio forums is that Sonic is better at improving positioning from stereo sources without affecting the audio quality. On the other hand, Dolby Atmos seems to do a better job with a source outputting surround sound, but falls short when it needs to virtualize stereo sources.

How to Enable Windows Sonic on Windows 10