Some users have been reaching us after discovering the ccc.exe process in Task Manager. Because it seems to consistently take up a decent amount of PC resources, some users are legitimately wondering if the process is genuine or if they should remove it from their systems.

The article is meant as an explanatory guide to help you understand the purpose of the ccc.exe process and help you determine whether it’s legitimate or not.

The CCC is the acronym for Catalyst Control Center. As you probably already figured out, the ccc.exe executable is part of the ATI video card driver package. If you were to look at the functionalities handled by ccc.exe, you’ll discover that it facilitates features like setting hotkeys for different display profiles and the ability to customize your display.

Keep in mind that ccc.exe is not the executable of the graphics driver, but it’s part of the utilities bundled along with the driver packages. The CCC executable is also responsible for the little ATI icon that you regularly see in your System Tray.

If the revealed location is inside Program Files \ ATI Technology, you can safely conclude that the process is legitimate and you shouldn’t concern yourself with it.

If your suspicions are correct, you can remove the malware infection with a powerful anti-malware scanner. If you don’t have one at the ready, you can use Malwarebytes since it’s extremely efficient. If you don’t know how to use it, follow our in-depth article (here) about getting rid of malware with Malwarebytes.

Should I remove the CCC.exe executable?

Manually deleting the ccc.exe process is not a viable solution since you’ll probably end up breaking the whole utility suite. The better way to do it is to make the necessary adjustments based on the problems caused by the ccc.exe.

For example, if you’re concern about the CCC executable using too much of your system’s resources, one way to tone the usage down is to get rid of the tray icon. The improvement is not huge, but on low-spec systems is substantial enough in order to make a difference. An easy way to remove the icon is to open the ATI Control Panel utility and go to Options > Preferences and uncheck the box associated with Enable System Tray Menu. 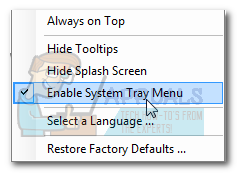 If that didn’t help, you can remove the ccc.exe executable by uninstalling the ATI Catalyst Control Panel. This might help if the high memory consumption is the result of an internal application bug.

But if you have an ATI-powered graphics card, your system will not function properly without the required drivers. After you removed ccc.exe and any related components using the steps above, visit this link (here) and reinstall the according to your graphics card and Windows version.

How to fix the “ccc.exe has stopped working” error

If you are regularly seeing the “ccc.exe has stopped working” error, you’ll probably be able to fix it by deleting the ATI folder from AppData. But keep in mind that while this following fix will prevent the CCC executable from crashing again, you will lose all the previously configured custom profiles in ATI Catalyst Control Panel.

Follow the steps below to fix the “ccc.exe has stopped working” error by deleting the ATI folder in AppData:

What is Catalyst Control Centre ‘ccc.exe’