Osu!, the fast-paced music rhythm game has been witnessing a rise in its player base. After playing it for just a few minutes, you realize that to really grow and dominate, you need to abandon the traditional mouse and keyboard style. This game is addictive and really competitive as well, so you need to have the right equipment if you want your name on the leaderboard. 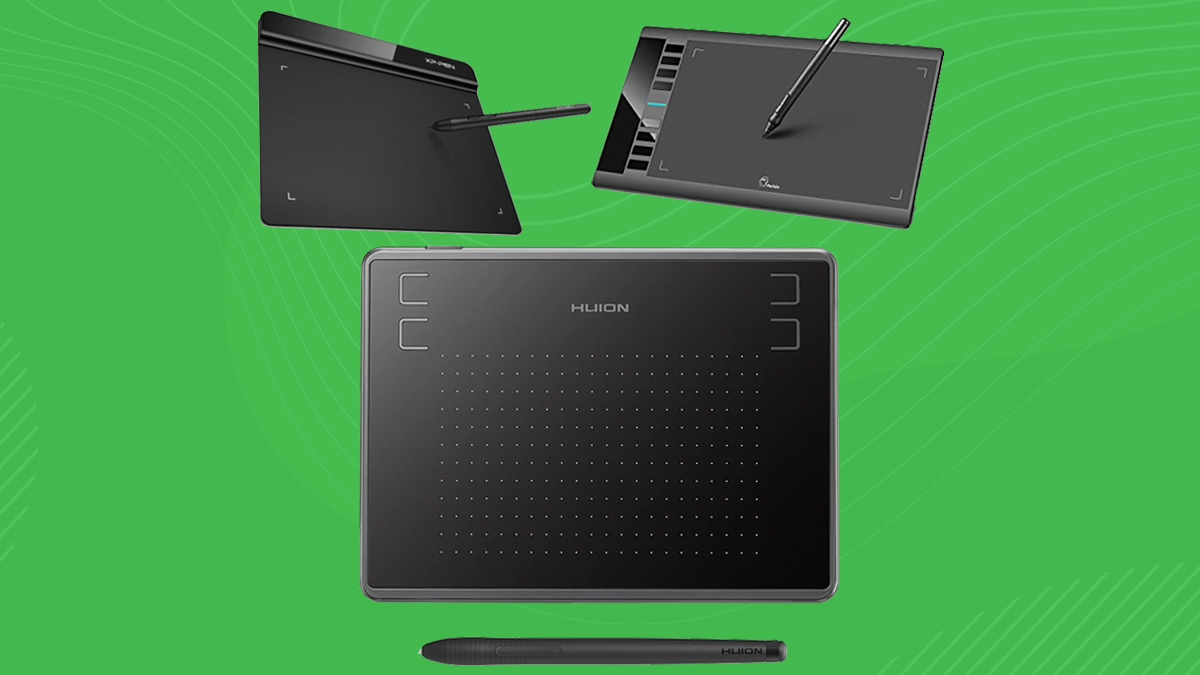 After all, playing with a mouse can only get you so far. This is why you’ll see higher-ranked players climbing the leaderboards using tablets. These tablets are similar to drawing tablets, however, if playing Osu! is your top priority then there are a few things you must keep in mind. So, without further adieu let’s dig right in and find out which is the best tablet for you.

The Wacom tablets have been a fan favorite for quite a long period of time now. And for good reason. They’ve been solely dedicated to making the best graphics tablets and styluses with unparalleled features. Although a bit expensive in the bunch, rest assured you can safely rely on Wacom to deliver the best hardware out there.

The CTL471 has a size of 8.3 x 5.8 inches and an active area of 5.8 x 3.6 inches. This size may seem small for a graphics tablet, however for an Osu! veteran, this is more than enough. The pad has a rubbery feel about it and it oozes a quick response feel. As for the tablet itself, the surface feels simply phenomenal and quite fantastic. The smooth rubber really compliments the stylus as well. For people who’re looking to use this for drawing purposes too, a downer for them is the lack of Express Buttons. With such a high price tag, it seems a bit unreasonable as to why there are no Express Buttons.

Like other Wacom styluses, this one too comes without the need for a battery. This means that you can simply get the pen out and get to smashing those beats. Lack of battery in no way means that the stylus suffers from slow response time. On the contrary, it felt as responsive as ever. Rest assured, no beat will go unnoticed provided you hit it at the right time. The stylus also has two programmable buttons, which makes up for the lack of Express Buttons in a way. It has 1024 pressure levels, which as far as other tablets go, feels lower. However, the amazing response time picks up the slack here as well.

The CTL471 tablet by Wacom comes off as a bit expensive, however, it is the best choice out there. After installing the drivers, you can redefine the active area as well. This tablet is compatible with Linux as well, so no need to worry about that. The only downside here was the omission of Express Buttons, however, as far as Osu! goes, there really isn’t much use for it. The CTL471 is not just the best choice for Osu! but the smooth rubber pad makes it perfect for digital arts as well.

It is almost unreal how amazing the XP-Pen G640 is. This thin, portable and super responsive tablet comes in at just under $30 bucks. Now, don’t let this cheap price tag fool you because this pen is here to prove its worth.

With an active area of 6 x 4 inches, this tablet feels just as large as any pricey ones. The rubber surface gives off the same highly durable and responsive feel as the Wacom one. This one is a thin tablet, just 2mm, and seats very neatly at your workplace. The size of this tab is more than enough for not just Osu! but graphical arts enthusiasts as well. With the increased Report Rate Speed(RPS) of 265, the G640 easily delivers smooth and quick movement on the pad. On the surface, it seems on par with the Wacom tablet however, there is a catch. The thin surface made us realize, upon testing it, that dragging may not be the ideal use for it. Moreover, the pad seems to easily catch fingerprints on it, so keep your microfibre cloth ready to go.

Like the Wacom tablet, the stylus of G640 is cordless and free of batteries. This is a definite bonus point as you do not have to worry about the pen running low on battery and thus, lagging out. Along with the programmable buttons, there is a button to switch between pen and eraser mode. Moreover, the ergonomic design of this stylus makes it ideal for both left and right-handed players. One thing that felt a little bit out of the ordinary was how the buttons on the stylus kept rattling. This rattle was not a really major concern however, it did raise questions about the longevity of it.

Being available at just under $30, the G640 by XP-Pen is a definite head-turner. The only concern was how it will fare when put to use for long periods of time. Despite that, this tablet felt very responsive and free of lag. Moreover, the stylus has quite a significant hovering distance so that is sure to come in handy as well.

The Gaomon S56K was designed with usage as Osu! tablet in mind. With that being said, its developers made sure that they created a tablet of two worlds- drawing and Osu!. Express buttons, flexible surface, and great overall performance at a terrific price, this is the Gaomon S56K.

Gaomon S56K has a mat-like design which makes it ultra-thin and flexible. With its 2mm thickness and flexibility, the S56K resembles a mouse pad. Therefore, it can be easily rolled up and carried around, giving it bonus points for portability. At the bottom are anti-slipping pads so that the grip is stern and firm on this tablet. S56K’s surface is great for dragging purposes as it does not get scratched and damaged up very easily. Unfortunately, it is a trade-off with this tablet as the hovering distance on this tablet is much less. Unlike the CTL471 and even G640, the S56K really excels in dragging only. Upon testing input delay and lags, the S56K performed somewhat equal to the G640. However, the previous two tabs give a much easier pad surface to work with.

Unlike the previous two tablets, the S56K has a stylus powered by AAA batteries. Normally, battery-free styluses are a much more preferred choice. That is because the battery and delay happen to be proportional to each other. Performance and input delay take a huge hit when the battery falls. Other than that, the pen had a nice and firm grip about it. It does feel somewhat heavier than the normal standard for the weight of a tablet’s stylus, but the response time when fully charged is still decent enough. It should also be noted that the CD drivers provided in the box are not compatible with Windows 10. This is why the correct drivers need to be downloaded off of the official website.

Gaomon S56K sits at the not too shabby but decent enough to get the job done. It lacks behind in terms of its ergonomics. However, if performance is your primary concern then the S56K will not disappoint. The response time is fairly decent, albeit not on par with some better tablets. And, this one can easily be rolled up and dropped in a bag for easy carriage.

Not just Osu! but digital artists will be fairly familiar with the name Huion. After all, most of the users newly stepping into the tablet realm start their journey with Huion tablets. The H420 is something similar. Although its performance when put up against the other mentions in this list comes out as weak in comparison, the H420 is still a fantastic tablet. Its small size packs many hidden features.

The H420 has a very miniature size about it. Its effective size is enough for Osu! purposes, however, not really recommended for drawing. The surface of the H420 gives off friction that resembles that of rough paper. With tablets intended for quick tracking on Osu!, this friction surface works as an advantage. One noticeable feature, however, was the screeching sound the surface made when the stylus was rubbed against it. H240 is on the cheaper side of things so it can get away with it, however, the G640 produces minimal noise at the same price. This does have 3 Express Buttons that can be programmed. However, left-handed users will find themselves pressing these buttons quite often due to their awkward placing.

The stylus comes with two programmable buttons which, for the most part, is fairly standard. Unfortunately, this too has an AAA battery-powered stylus, meaning all the same problems to be concerned about. The performance of this stylus was quite inconsistent. At times, we had trouble even getting simple lines to be registered, however, sometimes the stylus would glide over the pad beautifully. And deliver the smoothest gameplay. Luckily, the build quality of the stylus feels genuinely well made so durability is not a problem.

The H420 is one of the most favored beginner-level graphics tablets. It offers the basic functions and manages to do them very well. Some of the problems faced with this tablet might not be a concern to beginners. However, the small size of this tablet is a little off-putting. But if you can get past that, the H420 will work really well.

Last but not least, we have the S640 tablet by Veikk to wind up our list. This one offers a battery-free stylus with a very sharp and exquisitely designed tab, albeit with some drawbacks. Continue down reading to find out more about the S640.

Right out the bat, it is noticeable that the tablet itself has no buttons. Instead, most of the area of the S640 is designated to the drawing surface itself. However, the bezel and circuitry on the left size leave a big notch. For right-handed users, this will not seem like something to lose sleep over, however, left-handed users have an incredibly hard time getting a firm grip. The surface of the tab has very little resistance to it, which makes dragging not really ideal when using this. As far as hovering goes, the hover distance for the stylus too is nothing too out of the ordinary. Therefore, it ends up hanging in the middle of the spectrum.

The stylus is constructed of matte black plastic with two programmable buttons on one side. It was a relief to see that replacement nibs are provided in the box. It would’ve been better to see rubber grips on the bottom sides of the stylus for a more refined grip. Matte black plastic tends to slip from fingers when hands become sweaty because of long continuous use. Upon testing, we saw that double click only works when both touches are made on the same surface. This is very odd to witness and thus proved to be quite a troublesome move- having to double click. Moreover, buyers should keep in mind that there is no driver disk included in the box. Therefore, they must download them from the website.

The S640 comes off as a slightly cheaper graphics tablet than the previously mentioned ones. It lacks behind in terms of user-friendly and comfortable designs. That’s caused by the awkward position of the bezel and lack of rubber grips on the stylus. The double click issue seems to a very annoying one, however, it can be countered by programming one of the buttons to do the double-clicking. Apart from ergonomic designs, the S640 manages to perform fairly well in high-speed rhythm mapping maps of Osu!.