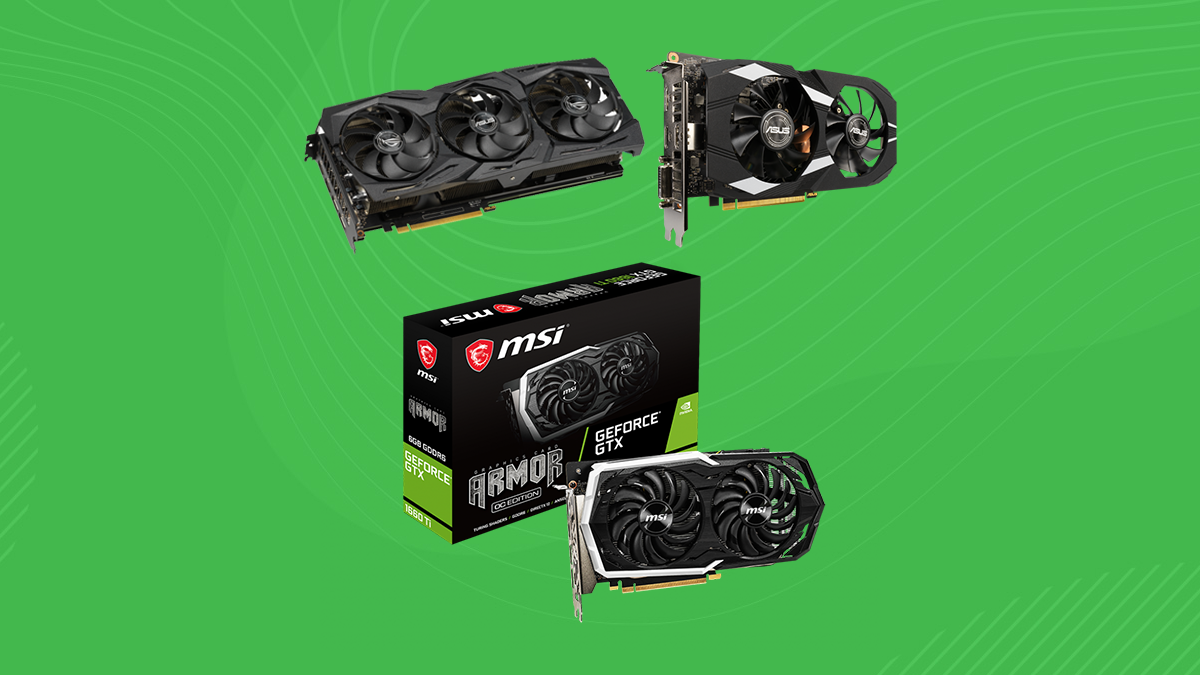 NVIDIA GTX 1660 Ti is a mid-range graphics card which is replacing the previously-known mid-range king GeForce GTX 1060. The graphics card is based on the 12nm manufacturing process and uses the TU116 graphics processor. With an SM count of 24, the Texture Mapping Units and the Render Output Units sum up as 96 and 48. There is a total of 1536 shader processing units along with an L2 cache of 1536 KB. There are no RT-cores or the Tensor cores in this graphics card, although it is still coupled with GDDR6 memory which is used in the RTX-series cards.

The VRAM size is 6 GB while 1500 MHz of memory clock with 192-bit of bus interface results in a total of 288 GB/s of memory bandwidth. As for the core clocks, the base clock is set at 1500 MHz while the boost clock is rated at 1770 MHz. With a power consumption of 120 Watts, the graphics card seems quite interesting and we will be looking at the best GTX 1660 Ti graphics card variants in this article.

ASUS is one of the most innovative companies when it comes to graphics cards and their variants are coupled with top of the line PCB, heat-sinks and fans. The ROG STRIX GeForce GTX 1660 Ti offers quite the same design as that of the higher-end RTX series graphics cards and one can barely tell that it is a GTX 1660 Ti. The tri-fan design looks simply beautiful and the RGB lighting greatly enhances the looks. It is definitely among the longest variants of the GTX 1660 Ti but if your case has enough space, this graphics card will give your rig an absolutely astonishing look. The axial fans at the front are a great improvement from the 10-series graphics card variants, both in terms of acoustics and cooling performance. The logo on the backplate is RGB-lit and looks really cool if you install the graphics card horizontally.

Out of the box, the graphics card has boost clocks of 1890 MHz, which are the highest of all the variants, as expected of the flagship variant. The graphics card uses a custom PCB, which is by no means limited by the power delivery, as GTX 1660 Ti is just a 120-Watt card. The thick heat-sink along with the all-new axial fans result in the coolest temperatures, around 60-degrees at full load, which is fantastic. As for the overclocking is concerned, the graphics card reached 2100 MHz on the core at max while having an average of 2050-2075 MHz. The memory can also be overclocked fairly and with an offset of 1500 MHz, the graphics card runs at effective clock rates of 1500 MHz.

Overall, with such an amazing overclocking performance, mind-blowing looks, and low temperatures, ROG STRIX GTX 1660 Ti is undoubtedly the best variant of GTX 1660 Ti, although it is the most expensive one too.

GIGABYTE achieved huge popularity with their AORUS lineup with the 10-series graphics cards and their RTX-series graphics cards hugely improved the aesthetics of the cards. The AORUS GeForce GTX 1660 Ti is somewhat in-between these two generations when it comes to looks because it does not use the same design as that of the high-end AORUS graphics cards like RTX 2070 and the likewise. It does not look bad but RGB lighting at the front would have been a great inclusion. The silver and black theme would still be better than most of the other variants although. The top of the graphics card has RGB lighting and supports GIGABYTE RGB Fusion 2.0. The backplate of the graphics card, like the ROG STRIX variant, provides RGB lighting as well, but it is quite minimal.

All-in-all, the AORUS GTX 1660 Ti is a graphics card which provides a great value as it performs great and is considerably cheaper than the ROG STRIX variant.

MSI GAMING X variants have always been the shiniest variants of the graphics cards. This graphics card too is an absolute beauty and we cannot just decide whether this one looks better or the ROG STRIX variant. The complex-looking fan-shroud having silver and dark-grey colour provides futuristic looks while the curved Torx fans and the RGB lighting enhance the aura of the graphics card greatly. The backplate of the graphics card is also very elegant, as it provides an aggressive brushed texture in combination with multiple vents for the air to flow.

The graphics card has a boost core clock of 1875MHz, which isn’t much lower than the previous two variants. In fact, in realtime, it gained the same clocks as those two variants, thanks to NVIDIA GPU Boost technology. As far as the overclocking is concerned, this graphics card did a fine job and easily achieved 2050+ MHz clocks. The temperatures of the graphics card, although, were a bit higher than both the AORUS and the ROG STRIX variants, as it incorporates a dual-fan design. However, this also makes this graphics card really quiet, the major credit for which goes to MSI Torx fans.

Conclusively, this graphics card does not have that beastly look but has elegant aesthetics while the performance is better than most of the variants of GTX 1660 Ti.

ZOTAC has upped its game a lot in the previous two generations of the NVIDIA graphics cards and is now considered on par with the other high-end vendors. ZOTAC GAMING GeForce GTX 1660 Ti AMP Edition is a graphics card, which is targeted towards budget users and those who prefer value over aesthetics. The graphics card does not provide most of the bells and whistles which other variants provide, such as RGB lighting, although it does include a backplate. As far as the build quality is concerned, we must say, this graphics card has a solid build quality. The grey and black theme of the graphics card doesn’t look half bad either, specifically with a dual-fan design.

The graphics card has boost clocks of 1860 MHz, which again, is not a huge drop than other variants and one would barely feel a difference in performance. The AMP edition is quite better than the standard edition by ZOTAC, which is why you get to see a fair display of overclocking. The temperatures of the graphics card stay around 70-degrees although; nothing problematic, just that it is not as competitive as others. Moreover, the fans of the graphics card are also not as innovative as other brands, leading to higher noise.

The boost clocks of this graphics card are lower than all the above-listed graphics cards, at 1845 MHz, which sums up as a 3% difference. The temperatures of the graphics card are slightly higher than the ZOTAC AMP variant, which would be much worse if EVGA would have gone with a dual-slot design. The results could have been better with a dual-fan design but it would lose its value due to being compact. The overclocking results in the realtime clocks around 2040 MHz, which isn’t half bad.

Finally, EVGA GeForce GTX 1660 Ti XC is a graphics card, which you should get if you are bound by the case limits and can withstand the ugly looks and lower factory clock rates.