AOC is one of the oldest brands and originally designed TVs in the start. However, the company soon started designing monitors and their monitors are praised a lot for their low price and high value. The company offers monitors for both gaming and home/office use and they have tons of products available.

The U2777PQU is a great offering form AOC and is a generic monitor, providing various useful features. The monitor provides the staggering sharpness of the 4K monitors and looks great, thanks to the modern bezel-less design. When we look at the history of 4K monitors, they used to be a lot pricier before and had price-tags of thousands of dollars, especially the IPS ones while AOC U2777PQU is one of those monitors which provide 4K resolution at a handful of those prices. So, let’s have a look at the detailed review of this monitor.

AOC U2777PQU is a standard monitor for home/office use, although it comes in a fairly impressive box. The packing was quite adequate and the contents were placed very firmly.

The baseplate of the stand feels quite heavy, which is why you won’t feel any kind of wobble with the monitor. The monitor comes with VESA support and that is why you will be able to use custom stands as well. This is a feature we would like to see in other monitors as well, as a lot of people use a multi-monitor setup. The buttons for the OSD are present at the bottom of the screen and feel somewhat cheap, especially comparing to the DELL monitors which come with capacitive touch buttons. There is a total of five buttons for manipulating the OSD settings while the legends for the buttons are visible on the bottom bezel. There are built-in speakers in the monitor as well, however, the quality of these speakers is inferior to even the cheapest external speakers we have seen. 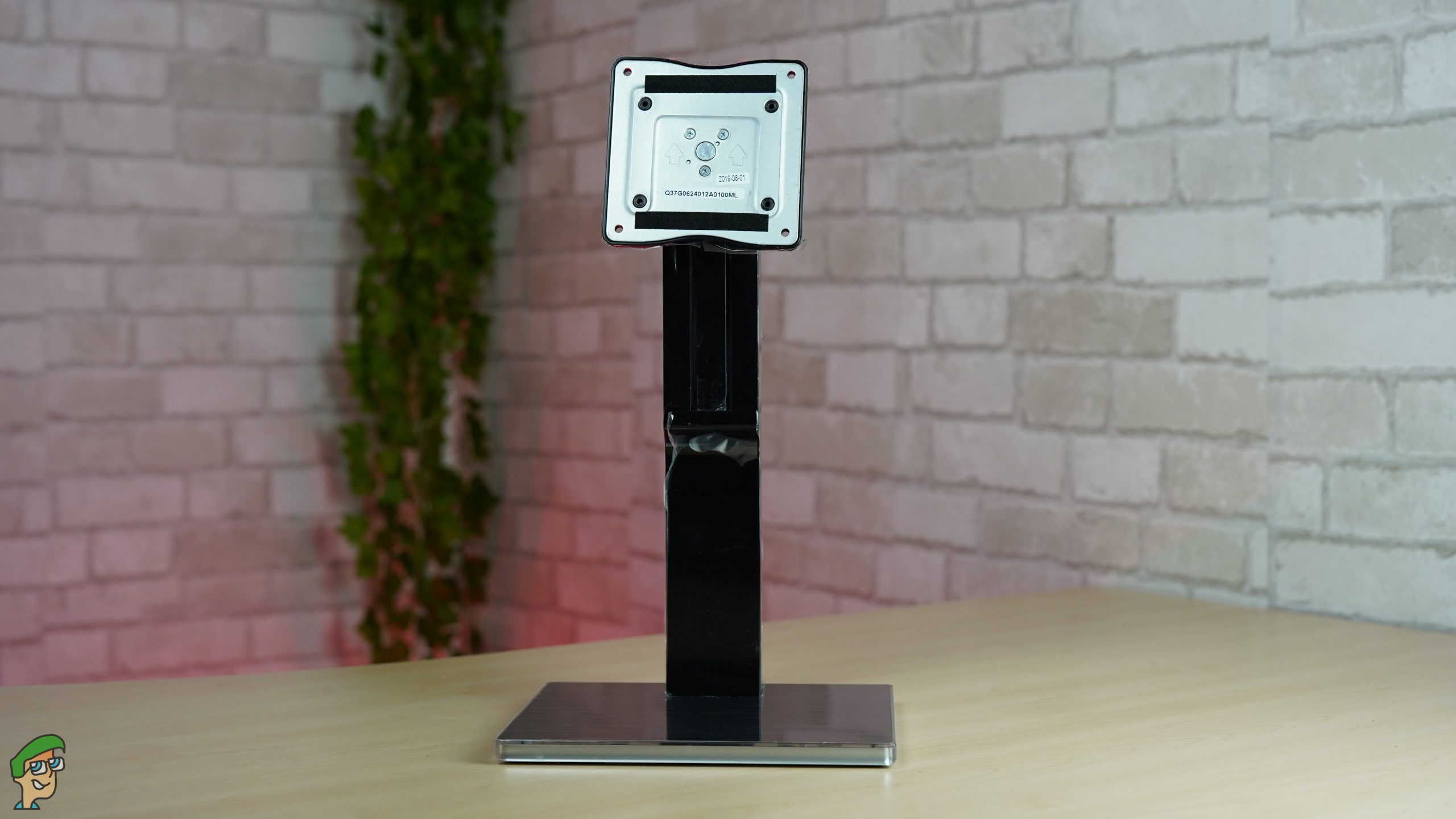 The capabilities of the stand of the monitor are quite good and it supports all the basic functions, i.e. tilt, swivel, pivot, and the height adjustment. The monitor can be rotated by 90-degrees clockwise, leading to portrait mode while it can be swivelled at 165-degrees on both sides. The height can be adjusted by 180mm in total while the monitor can be tilted by 5-degrees and 24-degrees forwards and backwards respectively.

Let us say this first; there are tons of ports in this monitor, which are present at the side and the bottom. On the right side of the monitor you get, 2 x USB 2.0, 2 x USB 3.0 (One of which supports QuickCharge for charging the mobile in an efficient and faster way), and a USB Type-B port to connect to your computer. That was just the side of the monitor so, at the bottom, we get a 3.5mm audio in and a 3.5mm audio out; the next to which lies the legendary VGA port (surprising support by manufacturer), a DisplayPort, an HDMI port, and a DVI port. 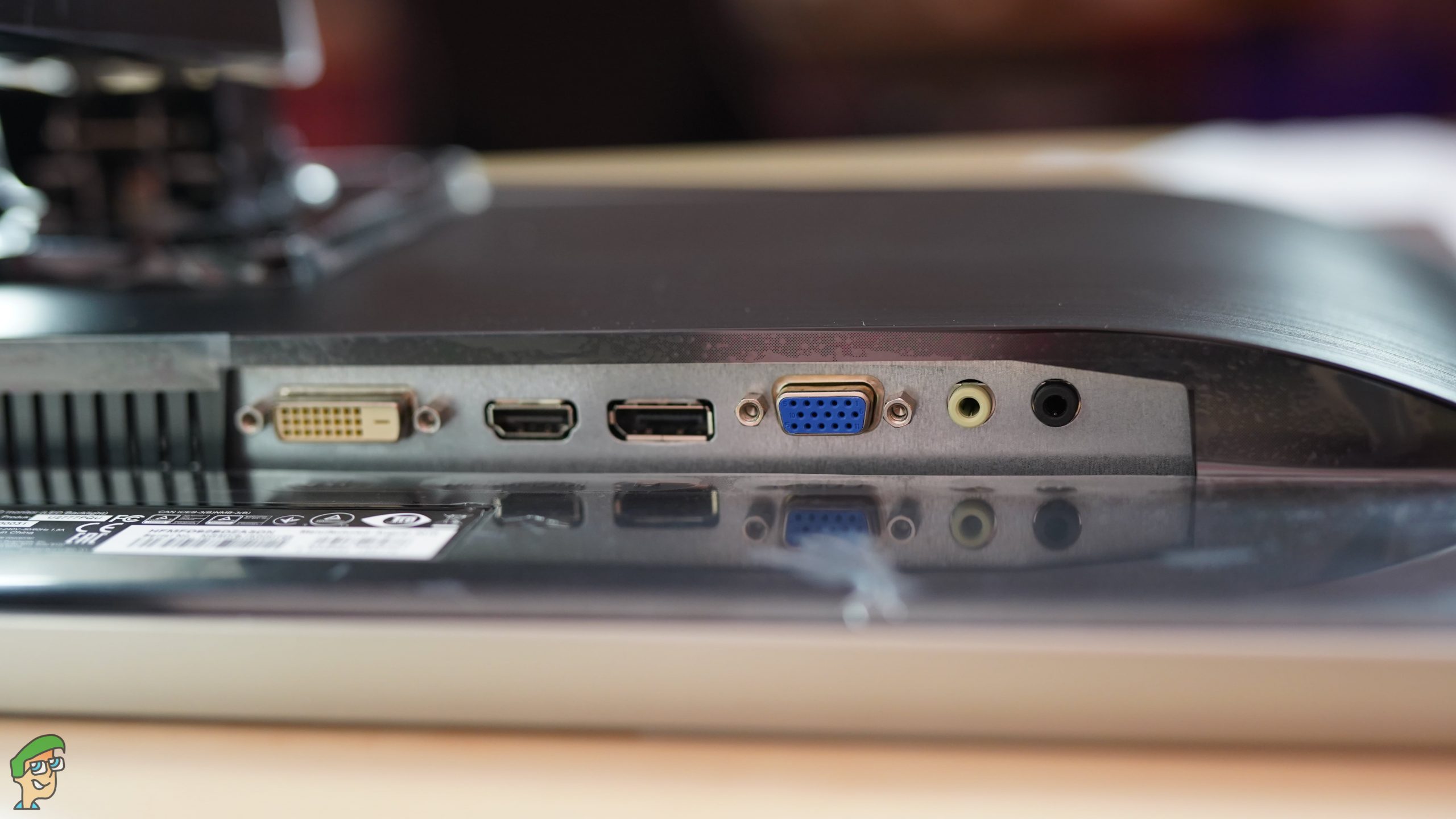 All of these bottom ports are present at the left side of the monitor while there exists a power button on the right side along with the power input. There seems to be no daisy-chaining possible with the monitor, as there exists only one DP port, however, other than that, this monitor provides support for most of the major ports necessary for the display, although there is no USB Type-C port.

The buttons for controlling the On-Screen-Display (OSD) are present at the bottom, as mentioned earlier, which is not the best place, although it is still, a lot better than a single joystick behind the monitor. The OSD itself seems quite confusing and is designed with quite a big size. There are seven tabs in total; Luminance, Colour Setup, Picture Boost, OSD Setup, PIP Setting, Extra, and Exit.

The Luminance tab provides controls for Contrast, Brightness, Eco Mode, Gamma, Dynamic Contrast Ratio, and Overdrive. The Colour Setup provides control for the Colour Temp., DCB Mode, and DCB Demo. The Picture Boost allows you to control the luminance of specific parts of the screen.

One can change the language, timeout, horizontal and vertical position, transparency, and port capabilities for the DP and HDMI in the OSD Setting. The PIP setting can be used to display signals coming from two sources and it can also control the size and position of that “picture-in-picture”. The Extra provides current display information, input selection, off timer, reset, and DDC/CI (which is useful for controlling the parameters of the display directly from the computer).

Overall, the OSD settings seem somewhat complex but this complexity results in greater customization as well, which is liked by many professional users.

The Display Panel – Before & After-Calibration Results

The AOC U2777PQU comes with an IPS panel, 3840 x 2160 resolution and a size of 27 inches. Since it is an IPS panel, the viewing angles are great and you won’t feel any kind of discolouration when viewing the screen from the sides. The monitor uses PWM backlight so you won’t feel any flickering as well, which is a must thing for some people. Natively, the panel supports 8-bit colours but by using FRC technology, the colour-depth is boosted to 10-bits, leading to a total of 1.07 Billion colours instead of 16 Million colours you would see with most panels. The panel does not support HDR or Adaptive-Sync technologies, like the AMD FreeSync and NVIDIA Gsync.

First of all, the out of the box experience of the display is not so impressive and multiple displays won’t have consistency. Upon checking the colour space of the panel, we observed that the display supports 97% of the sRGB colour space, 78% of Adobe RGB and DCI-P3 colour space and 73% of NTSC colour space. Initially, the gamma value had quite a deviation at 1.9, although it got to 2.2 after calibration. The white point seemed great right out of the box. After calibration, the recommended brightness value was 134 candelas. The response time of the panel is quite low at 4ms, however, the overall input lag of the monitor is not very good and is around 35ms.

Conclusively, we will advise you to calibrate the monitor if you want to do some content creation, however, if you are just going to watch some movies and play games, you don’t need to buy a calibration device at all and the display will feel good enough to use with slight adjustments from the OSD.

The performance of a monitor greatly affects the overall experience of the user and that is why we are providing some insight into the details of the monitor.

First of all, the 4K resolution feels great for any kind of productivity, especially with the 27-inch monitor size. The workspace feels huge and one can easily manipulate various things at the same time. The monitor’s colour space (97% sRGB) feels more than enough for most users, even those who work with digital art, although, the monitor is not so good with colour correction and grading, as those require significantly better colour space support. The response times almost don’t matter for productive usages and ghosting is not noticeable most of the time too. A great thing about the monitor is that you will be able to view 4K clips natively and with such a good colour space support, the movies look very realistic and monitor provides lifelike colours.

Comprehensively, the monitor is capable of doing most of the day-to-day tasks along with sufficient technical specifications to aid in things like digital art and it seems like a great office-use monitor.

The most important thing about a gaming monitor is the refresh rate. Since this is a 4K monitor, there was no way that it would provide those high refresh-rates while being under $500. The 60-Hz gaming is still, not so bad when doing casual gaming, especially in the Third-Person titles. Moreover, we noticed that the higher resolution tends to aid in this matter and it does not feel as bad as a 1080P monitor with a 60Hz refresh rate. Since the monitor does not support any kind of Adaptive-Sync, you will be forced to use Vsync, which greatly enhance the input lag.

Last but not least, the 4K resolution tolls the graphics card a lot and you will have to use at least NVIDIA GeForce GTX 1080 or higher / AMD Radeon Vega 56 or higher to achieve smooth frames rates while using the medium to high settings for most of the AAA games. This is particularly disturbing for a lot of people, as not a lot of people can own such high-end graphics card and if you reduce the resolution to 1440P during gaming, the resulted aliasing is much higher than the monitors which use native 1440P resolution.

Conclusively, we will advise not to use the monitor if you want to do competitive gaming, however, if you own a high-end PC and want to do some casual gaming, the monitor will provide a great value to you.

The AOC U2777PQU feels like a monitor which can be used as a gateway for many purposes. The pre-calibration results are not very good but one can still do digital art on it fairly, although the post-calibration results seem pretty good. The response times of the monitor are although better than many office monitors, it still is not comparable to gaming TN panels or even the gaming IPS panels. Moreover, the ghosting is higher than gaming panels,  which is why we will not advise you to do competitive gaming with this monitor, although it seems more than enough for casual gaming. The high-resolution display definitely looks awesome with the AAA titles like Assassins Creed Odyssey and Battlefield V, however, the lack of high-refresh-rate makes it feel sluggish. As for the generic multimedia is concerned, the monitor provides stunning visuals with 4K movies and videos and feels great with stuff like video editing as well, thanks to the huge workspace. All in all, the monitor can fulfil most of the wishes of the regular consumers, although if you are someone who relies on Adobe RGB colour space or faster response times, you should check some other monitors.

VERDICT:A great choice for those people who want to buy a multi-purpose monitor, covering web-browsing, multimedia, digital art, or some casual gaming. 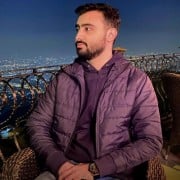