Safe Mode is a feature that has been built into all of the iterations of the Windows Operating System to have ever been created up till now. When a computer enters Safe Mode, all outside network access is terminated and all third-party applications and programs are rendered unusable, stripping the computer down to its core software only. Safe Mode is designed to be used to troubleshoot a variety of different problems and to determine whether or not a problem is being caused by the network(s) a computer is connected to or a third-party program that has been installed onto the computer.

Safe Mode is also available on Windows 10, the latest version of the Windows Operating System. One of the problems that a number of Windows 10 users are reportedly suffering from is their computers getting stuck in Safe Mode and booting into Safe Mode every single time they are restarted. According to reports, in such cases, users fail to boot their computers out of Safe Mode no matter what they do. A computer running on Windows 10 can get stuck in Safe Mode for a number of different reasons, primarily the user enabling the “Make all boot changes permanent” option when booting into Safe Mode from msconfig or a faulty Windows system upgrade from a previous version of the OS.

Before you begin; uninstall your antivirus/firewall temporarily until the issue is resolved. After the issue is fixed; you can put it back on.

The following are the steps that you need to go through in order to fix a Windows 10 computer that is stuck in Safe Mode:

In the Run dialog, type msconfig.

In the event that you are prompted by UAC, click on Yes.

In the System Configuration dialog that appears, click on the Boot

Clear the checkbox beside Safe boot by clicking on it. This will change the computer’s default boot mode to normal.

Enable the Make all boot settings permanent option by clicking on the checkbox beside it. This will make sure that the computer boots up in normal mode every single time. 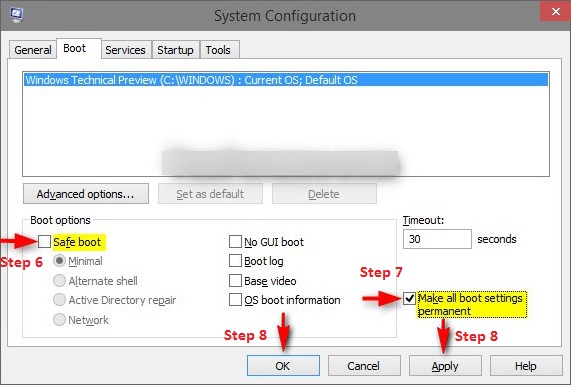