Skyrim is one of the most popular and definitely one of the best PC games ever created. It is set in a fictional world with a complex political state where a lot of different creatures and races interact. The game is every RPG lover’s dream and, even though the game came out in 2011, it still has a large player base and a lot of people are still working together to improve and mod the game. It was released by Bethesda and they are already known by their camaraderie with the modding community. Skyrim is definitely one of the most modded games in the history of gaming and mods are there to improve and change everything; from the game’s appearance and visual quality to the adding of new story lines, new factions, and new gameplay mechanisms. Mods are definitely keeping the game alive since apart from a long main story and a tremendous amount of side quests.

One of the most popular Skyrim mods called Civil War Overhaul created by a modder who goes by the alias “Appollodown” was an absolute hit since its goal was to present and make the player experience the great civil war which was raging in Skyrim’s fictional history. The mod was quite enjoyable, to say the least, and some of its features are really awesome. For example, things going on in the civil war affect some of the NPCs’ actions and there are different outcomes since you can actually lose the war! Modding any game can be dangerous since mods are created by regular people who have knowledge with game design. They have not participated in the game’s creation and they are not offering a perfect performance. However, they are worth a try as long as you back up your saves. Bugs are going to occur but every new release of any mod fixes a lot of them.

This mod managed to gather thousands and thousands of players but the author suddenly decided to hide it until November 9 and he replaced the mod with a message: 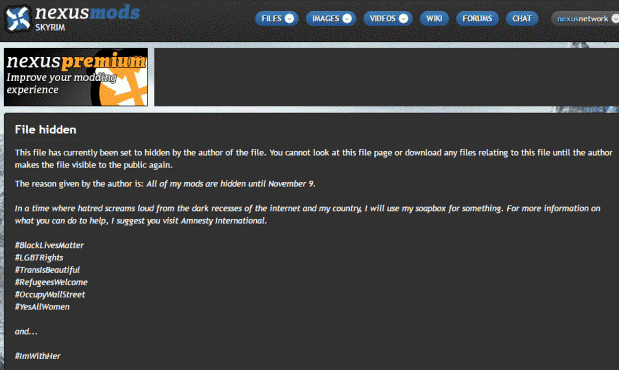 The reason for this decision is hard to find but the author himself claimed that he received a lot of backlash from his community since he implemented a “Diversity Day” in the mod where he added NPCs of different races to Stormcloaks, a faction which consists of a single race natively by the game. Some people noticed this and the author disagreed with some opinions he faced on the Nexus Mods forum where he proceeded to ban users who called him out on the addition of the “Diversity Day”. Appollodown also claimed that this addition is a mere reference to a TV show “The Office” but he also responded to criticism by calling certain users Trump supporters and members of the Ku Klux Clan.

The whole thing ended with a message claiming the mod will be restored on November 9 with a lot of hashtags pointing to various movements such as LGBT rights and Black Lives Matter. His move sparked a lot of online debates and it seems the only people on the losing side are mod’s active audience. The mod will definitely lose a lot of players and there is no known legal way of downloading it.

Why is the Civil War Overhaul Mode no Longer Available?