If you’re a user of a Debian-based Linux distribution, then you probably see the word apt an awful lot. This goes for users of Ubuntu, the various Ubuntu spins, Linux Mint, LXLE and Trisquel GNU/Linux. While it refers to the package manager that helps you install software on your system, the name is used in the apt directory, apt-cache and in many other places. What does apt mean is one of the most common questions users just getting into the Linux terminal ask. At this point, there’s probably a number of coders who aren’t even all that familiar with the reason behind this name.

Due to the predominance of the apt-get package manager utility that command line aficionados use to install software on their systems, many users have turned the name around to read “get application terminal” or “get an application today” yet both of these suppositions are actually incorrect. The name apt stands of Advanced Package Tool, and all of the various programs that have the name apt in them are based solely on this original meaning.

The Meaning of apt

At one point, all of the man pages for apt called it the Advanced Package Tool. However, some current issues don’t actually use this moniker any longer. That’s where part of the confusion came from. When that name remained in the man page, people used it more often. If you’d like to see for yourself and you’re on an apt-based distribution, then hold down Ctrl, Alt and T to open up a terminal. You might also wish to search for the word terminal on the Ubuntu Unity Dash or click on the Applications or Whisker Menu, head to System Tools and click on Terminal.

Once you’re there, type man apt and push enter. More than likely, it just refers to it as “apt – command-line interface” at this point. We also opened the xman graphical manual browser, clicked on Manual Page, selected Options and then Search. Having typed in the word apt, we received the same page. It looks like for some reason the full name isn’t referenced very much at all any longer, but the answer to the question of what does apt mean really is just Advanced Package Tool. It certainly must have seemed like a major improvement over the methods that users had in the past to install Linux software. While there’s something to be said for compiling a project from source, package management makes it much easier to administer large systems that constantly have to be updated with something like this kind of a tool hence the name 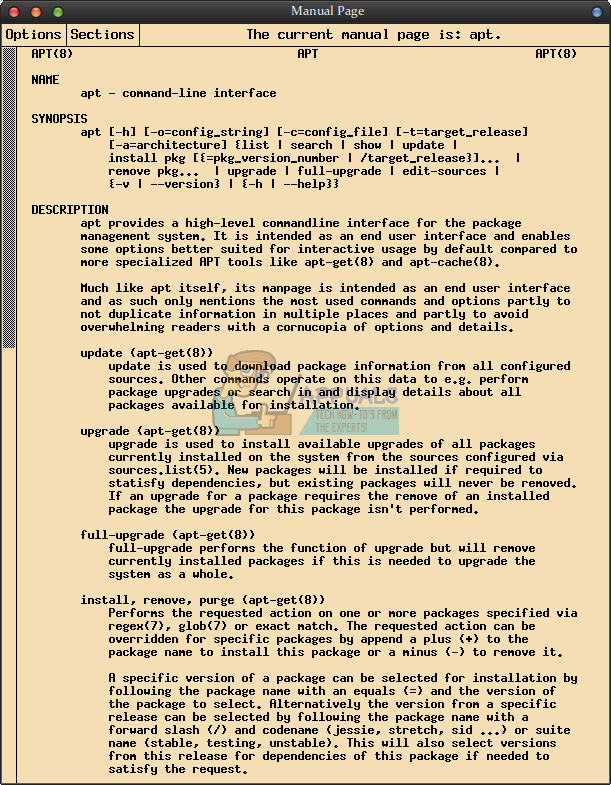 You can see how many times that Debian and other distribution programmers have used this name for tools on your system as well. Type apropos apt | grep apt- at the command line and push enter. You’ll find the familiar apt-get as well as apt-secure, apt-key, apt-mark and many other tools that you might not be as familiar with but help with package management jobs quite a bit. Other pieces of software like Synaptic and aptitude were named due to puns based around the apt name. Many Linux and other Unix developers have great senses of humor.

It’s obvious that the individuals who work on apt have a sense of humor too. Try typing apt at the command line and pushing enter. You’ll receive a wall of text regarding various options for installing and purging packages. All the way at the end you’ll get a message on most apt-based GNU/Linux implementations that “This APT has Super Cow Powers” before returning you to the prompt. If this is your first time trying this, then you’ll probably be pretty surprised to see that one. Either way, you can be sure what’ about to happen is going to be very important. 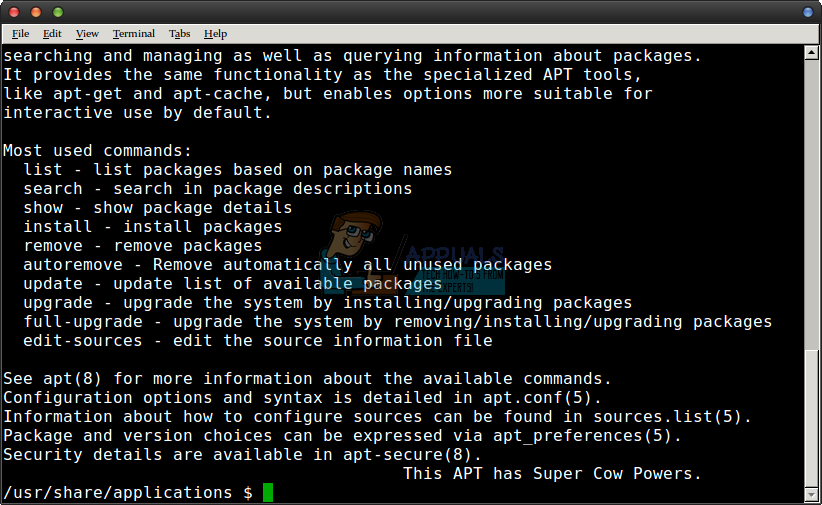 If you’d like to see these cow powers in action, then type apt moo at the command prompt and get ready for an extremely vital question. 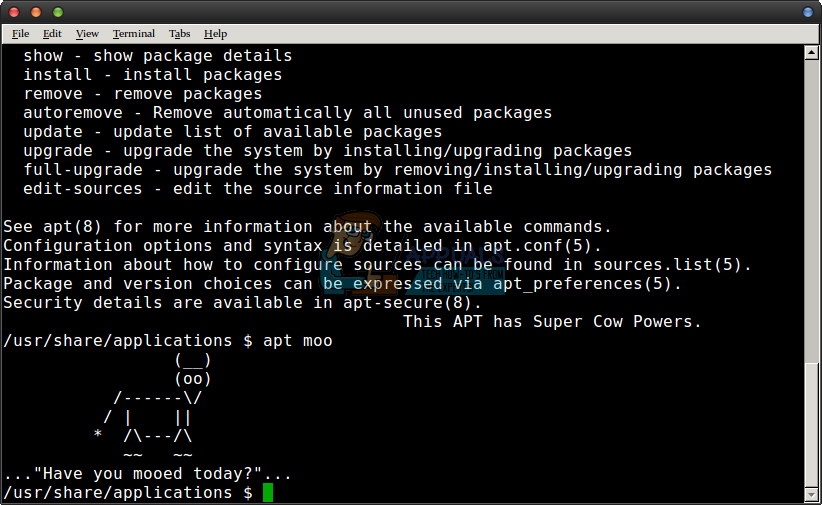 Now if you think that’s funky, then think about this: the original name for project that lead to the apt-get program was known by the codename deity. The mailing list for the developers actually called their group “The Deity Creation Team!”