The internet is filled with how-to articles on how to enable Developer Options. But very few of them will tell you how to disable the hidden menu when you’re done using it. 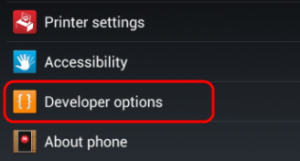 Android got most of its fame after the public realized it’s built in such a way that it accommodates both developers and common users. Even before it was acquired by Google, Android shipped with a dedicated SDK that contained a plethora of tool-kits specifically designed to help developers in their creation quest. ADB and Fastboot are just two examples of in-house tools that Android modders around the world couldn’t live without.

In an effort to avoid the hassle of releasing a separate Android OS version targeted towards the app creators, the team behind Android decided to include a bundle of settings specifically for developers called Developer Options. To prevent regular users from messing with settings that can alter the phone’s functionality, the Developer Options tab is hidden by default.

Developer Options is an invaluable tool for every respectable modder and app maker. Here’s are a few of the things it’s used for:

But from all the potential usages of Developer Options, USB Debugging Mode is by far the most used option. Enabling this option will let your device communicate with a computer. Whether you want to root a device, unlock the bootloader or flash to a stock firmware, it’s all done through USB Debugging. If you’re searching for a way to disable Developer Options, chances are you used USB Debugging too.

If you’re interested in hiding or disabling Developer Options, you should know there are several different methods to go about it. Follow one of the methods down below to hide Developer Options on Android.

Keep in mind that the following method won’t be applicable across all the Android realm. Some manufacturers won’t have this toggle inside Developer Options. Even more, following the steps below won’t make the tab hidden again. All it does is disable any functionality related to an option you might have enabled from there.

So if you want to get rid of something caused by a setting in Developer Options without hiding the entire tab, follow the steps below. If want Developer Options to be hidden from the Settings menu, follow one of the other two methods below.

You can go back and re-enable Developer Options via the same toggle any time you need it. The entry will still be visible on the Settings menu.

If you want to remove the Developer options menu completely, this following trick should do the job. Unless you have a Samsung S model – they are known for storing the cached data for Settings somewhere else.

After you’re done performing the following steps, Developer Options will most likely be hidden from the Settings menu. You can make it appear again by going to Settings > About Phone and tapping on Build Number seven times.

If the entry is still visible, move on to the final method.

If the method above was not successful, I’m probably right when I say you have a Samsung S model. If you’re desperate enough to get rid of the Developer Options, a factory data reset is your only option.

Keep in mind that the following procedure will erase all personal and app data that isn’t present on your SD card. This includes contacts, photos, videos, music and any other types of files. Before you go through the whole process, I urge you to consider making a backup to avoid unnecessary data loss. Here’s what you need to do:

How to Turn OFF Developer Options on Android