SYSTEM_SERVICE_EXCEPTION (KS.SYS) is one of Windows’ kernel CSA library files. This specific one is connected to the video camera on your computer. It is a process which is an integral part of Windows and a file that shouldn’t be deleted even if it causes errors. The kernel as a whole is considered a vital part of Windows, and you shouldn’t modify it in any way.

SYSTEM_SERVICE_EXCEPTION (KS.SYS) error, followed by a Blue Screen of Death, signals that the system has some sort of miscommunication with the drivers for your video camera. It tends to appear for owners of HP systems with integrated webcams, or owners of an HP webcam. It is usually triggered by an update for Skype, and the most often found one is updating from Skype 6.14.

While this error doesn’t affect a particularly big number of users, there are a couple of methods that you can try to fix it if you’re affected. The first one is to fix your Skype version, and the second one is to fix the video camera drivers. 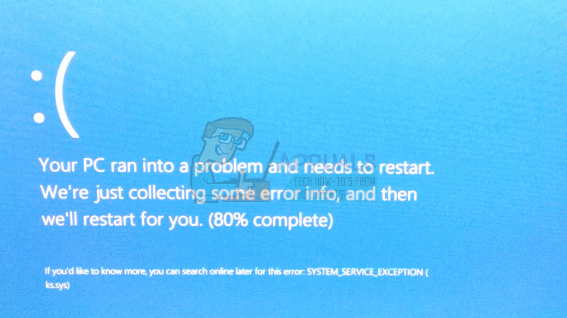 Method 1: Revert back to the older version of Skype

Given that this issue is oftentimes triggered by a faulty Skype update, a logical solution to it would be to revert back to the older version that you were using without the issues. First of all, you should uninstall the version you are currently using. That is best done by opening Add or Remove Programs in the Control Panel. Press Start, type Control Panel, and open the result. Set the view in the top right corner to large or small icons, and open Add or Remove Programs, or Programs and Features, depending on your version of Windows. In the list of programs, locate Skype, click on it, and then click Uninstall. Follow the wizard to remove Skype. At the end, reboot your device to remove any potential leftover files.

When you’ve removed it, search the Internet for the version you had, which is most likely Skype 6.14. Download it from Skype’s website, and install it on your computer. Reboot the device again, and you can continue using it without the error and BSOD.

The second cause for this issue can be HP’s webcam drivers creating a conflict with your system. To solve this, you can remove them, after which Windows will install generic drivers for your webcam. In this way, there is a chance that you may lose some of the advanced functionalities of your webcam, but this is a rather small sacrifice for being able to use your computer properly.

To remove HP’s drivers, you need to open the Device Manager by pressing Start and typing Device Manager, then pressing Enter. In the list of devices, find Imaging devices, and expand it. Inside you will find HP’s device drivers, right-click and select Uninstall from the dropdown menu. Follow the wizard and your drivers will be uninstalled.

When you’re done with this, reboot your device. Now that there is no driver for the webcam manually installed, Windows will activate its generic one. That one won’t cause conflicts and BSODs, and you can continue using your computer.

Even though this error affects a very small number of users, it can be a major problem for someone who is using their computer for important work, as it will crash your system very often. However, following the aforementioned methods you can solve it and continue using your device.