Some users have been reaching out to us with an odd occurrence where Skype automatically closes (or minimizes) itself sometime after being opened. From what we gathered, the issue seems to be restricted Skype version 8.9.0.1 and above. The precise cause of this issue can appear hard to identify since there’s no apparent error message to point the user toward the cause of the issue.

There a lot of debate on what precisely is causing the issue – some users are pointing fingers at the update function that’s closing Skype in order to update it, while others are suspecting the Windows 10 version of Skype. Curiously enough, this particular issue is not restricted to Windows 10, so blaming everything on the Skype UWP version is not valid since the issue is also encountered on Windows 7 and Windows 8 – which don’t include the Microsoft Store version of Skype.

If you’re struggling with the same issue, you might be in luck. We managed to identify a couple of fixes that turned out to resolve the issue for a lot of users that were in a similar situation as yourself. Please follow the methods below in order and see whether they manage to resolve your issue.

Some users have determined that in their case the issue is occurring whenever the Skype UWP is opening – this supposedly forces the desktop version of Skype to close.

Note: This method is not applicable if you’re running on Windows 7 or Windows 8 since both don’t include the Microsoft Store version of Skype by default. If you’re not encountering this issue on Windows 10, skip straight to Method 2.

In the event that you’re encountering this issue on Windows 10, disabling the built-in version of Skype will most likely resolve the issue. Follow the steps below to disable  the built-in Windows 10 app:

If this didn’t resolve the issue or this method wasn’t applicable to your situation, move over to the next method.

If Method 1 was a bust (or not applicable), let’s try rolling back to an older Skype version. This method has been confirmed to be successful in resolving the issue for Windows 7 and Windows 8 users.

Uninstalling your current Skype version and resorting to an older but more stable build will resolve the issue. Typically, any Skype version under build 8.9.0.1  should not suffer from the glitch that causes it to close unexpectedly.

Here’s a quick guide to uninstalling your current Skype version and downgrading to an older version:

If these two methods haven’t been effective, there is another alternative if you’re on Windows 10, but you might not be very fond of it. From what we gathered, the built-in version of Skype (Windows 10) does not suffer from the same glitch that causes it to shut down unexpectedly. If the two methods above weren’t effective, consider using the built-in version of Skype (Skype UWP). 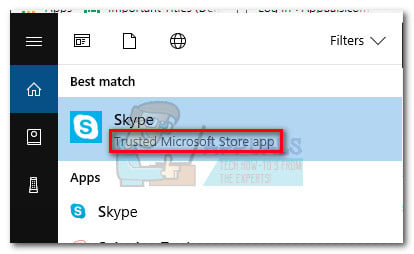