Mastering parachuting and skydiving in Playerunknown’s Battlegrounds is essential to getting a good start. You must know where to land and how to get there by parachuting and skydiving. All 100 players start in the hold of a cargo plane that follows a set flight path, which is randomized every game. After a few seconds, players are able to jump out of the plane by pressing ‘F’, which throws them outside equipped with a parachute.

If you do not press any key while free falling, your character will accelerate downward reaching a max speed of 180 km/h and will not move laterally at all.

If you hold the forward key while looking straight down at the ground, your character will accelerate to 234km/h and will not move laterally at all. However, if you look up while holding forward, you will accelerate vertically to a max of 126 km/h, and move laterally, in the direction you are facing, at 122km/h. This will help you cover large distances to get to places where there will be relatively fewer players landing.

If you hold the back key while falling, your character will decelerate to 126km/h while not moving laterally.

Once your chute is open, if you do not press any key, you will fall at 54km/h while not moving laterally.

If you hold the forward key, you will fall at 64 km/h and move laterally at 47km/h. The direction you are facing has no effect on your speed, neither does spiraling. 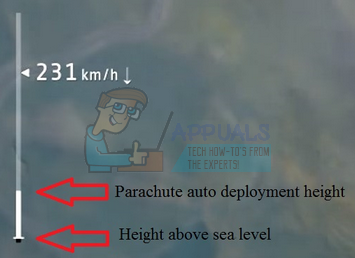 This is helpful for landing on rooftops where precision is important.

After you jump, look straight down and hold forward until your parachute opens. As your vertical speed is 234km/h, your parachute will deploy almost 1/4th of the way below the top of the white line. Once your parachute opens, keep holding forward and you will land after traveling 200 meters in the direction you are facing. You will reach the ground (sea level) in about 35 seconds.

To travel the longest distance laterally, look up and hold forward just after the jump, then deploy your parachute as soon as you can. Once parachuting, hold forward until you are at the max ‘tilt’ of your parachute, then release forward until you are at the default position. Repeat this motion and maintain a vertical speed of 20 – 25 km/h until you have landed. Doing so will keep you in the air for upwards of 2 minutes and you will travel up to 3 kilometers in the direction you are facing.