Star Wars: Galactic Battlegrounds and its sequel expansion pack Clone Campaigns are relatively older Windows games, but they ironically have a growing fanbase online. Both of these titles are built on the Age of Empires Genie engine, which means both series of games require many of the same tricks to run under Linux. If you’re trying to revitalize your old Age of Empires or Galactic Battlegrounds CDs, or if you recently got a used game, then you can actually run them easily on even a low-powered mobile Linux netbook.

Running the install program follows the same path it would have under a genuine Windows environment, but make sure to unmount the install CD-ROM once you’re done installing any of these games. Unlike in Windows, you can’t simply remove the game CD-ROM. It must be unmounted like any other volume in Linux. You’ll then have to insert the second CD-ROM in order to play the game, or else you’ll receive a warning about you don’t have the right to play the game in question. Once you have it installed, you might have to perform a simple graphics tweak to get it to work.

Upon starting the program you’re given a menu screen to begin a new game from. Select Start Game from this menu, and in most cases the program should boot correctly. 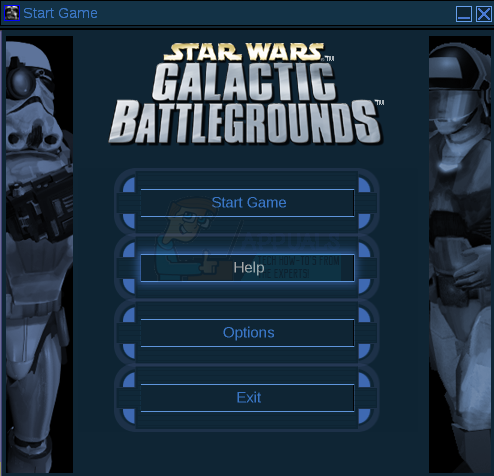 You may, however, receive an error message that reads “Could not initialize graphics system. Make sure that your video card and driver are compatible with DirectDraw.” This error message will be present in a box that’s indistinguishable from one found in a genuine Microsoft Windows environment. Ultimately this message can be a bit counterintuitive because if you were to check winecfg or attempt to reinstall the DirectX drivers that there wouldn’t be anything wrong. Installing the DirectX drivers all over again will only take a moment, but it might not correct the issue. If you run Galactic Battlegrounds by itself you might not have this message until you install the expansion pack.

Note that the only thing keeping this from being a Windows-only error message is the WindowLab Openbox theme surrounding it, which means it is indeed the Windows subsystem and not Linux displaying it. Click on the OK button and then either run the winecfg program from the CLI or run line or open up the Wine Configuration box from the applications menu. 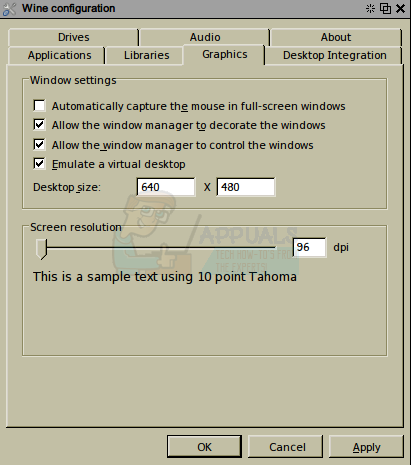 Select the Graphics tab and then make sure that the checkbox next to “Emulate a virtual desktop” has a check in it, then click on the OK button to close the window out. Start Galactic Battlegrounds, Clone Campaigns or any other Genie game like Age of Empires from the icons that the installer made under Wine. You’ll need to go back and use this same tool to undo this change if needed later, since some other pieces of productivity software you’re running under Wine might look awkward run in this fashion. 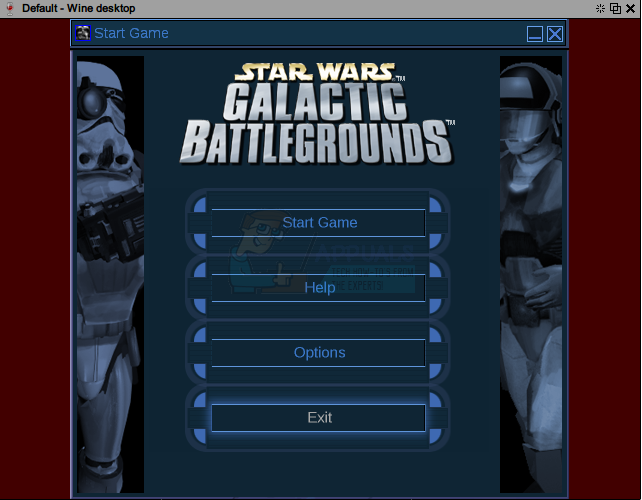 The same menu from before will come up, but it should now be inside of a window with the controls of your Linux desktop environment’s window manager surrounding it. You can grab the top of the window with your cursor and position it wherever you’d like. After this, select the Start Game button. You’ll be treated to a video package that you can skip by clicking in the center of it, which will cause the window to reposition itself again with a new menu screen. 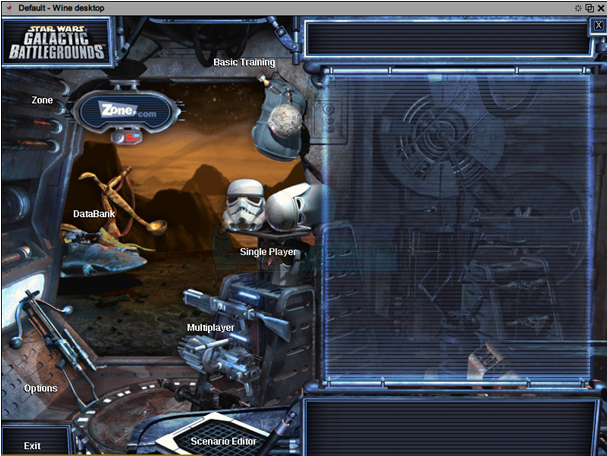 You’ll need to configure your sound before going ahead to prevent excessive noise. If your sound is configured correctly, then you should hear the sound effect of Darth Vader breathing. Should you not hear it, increment your master system volume next to the system tray up slowly until you can. You might also hear the main Star Wars theme, and if so, you should set the volume at a safe level before moving on. Musical cues in Single Player mode can be very loud, so this isn’t an exaggeration. Once you’re sure that you’re safe, click on the Imperial Stormtrooper and Snowtrooper helmets to enter Single Player mode. You may be asked to fill in a name, and if that’s the case then the prompt box will begin to flicker in and out.

Later if you attempt to save a Single Player or Basic Training game, then you’ll experience in the same glitch. In either case, position your cursor inside of the box and type something in. This glitch is unrecoverable and you should ignore it. If you properly entered something, however, you should be able to view a game map after approval. 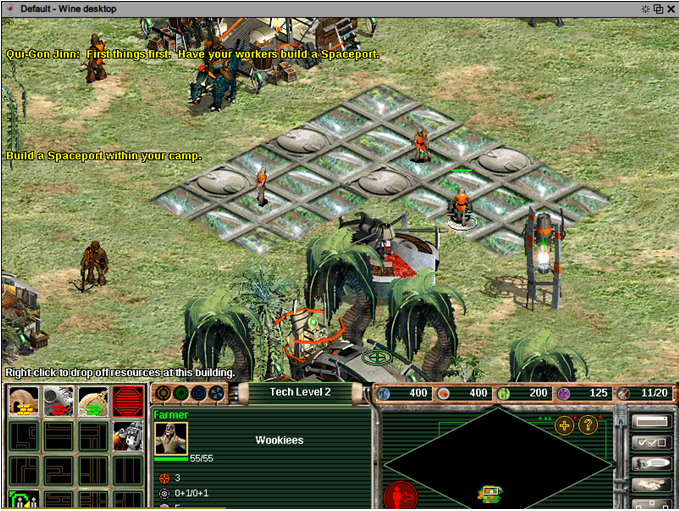 Notice in the example that the game window actually extends beyond the bottom of the display. Move the title bar up above beyond the top of your screen to clear up the issue if at all possible, though you can also return to the winecfg dialog and set a smaller screen resolution if this doesn’t work. You can also attempt to disable screen edge window snapping in your window manager settings, though you will more than likely want to immediately turn this back on once you’re done playing. Once these tweaks are in place, you shouldn’t have any further problems as long as you restrict yourself to single-player mode.

Most gamers only ever use this mode when playing under Wine. Though it’s theoretically possible to use winetricks directplay from the CLI to get this to run over a network, the official Wine repositories have comments from several different gamers who complain that the game crashes if they select the “Internet TCP/IP Connection for DirectPlay” feature. It’s best to consider network games played over a TCP/IP connection unsupported at best, but these bugs may have been fixed in recent versions of Wine. If you have any similar problems when exiting the DataBank back to the main menu, then you need to update Wine since these problems were corrected some time ago.