Hackers have compromised the Twitter account of NVIDIA Taiwan. NVIDIA Taiwan’s almost entirely silent Twitter account appears to have been hijacked; fresh tweets are now promoting mysterious cryptocurrency-related activities. Only recently, the Taiwanese division of NVIDIA tweeted something since the end of 2019. The account responded to several earlier tweets this afternoon with wholly unrelated English-language advertising for various cryptocurrencies. 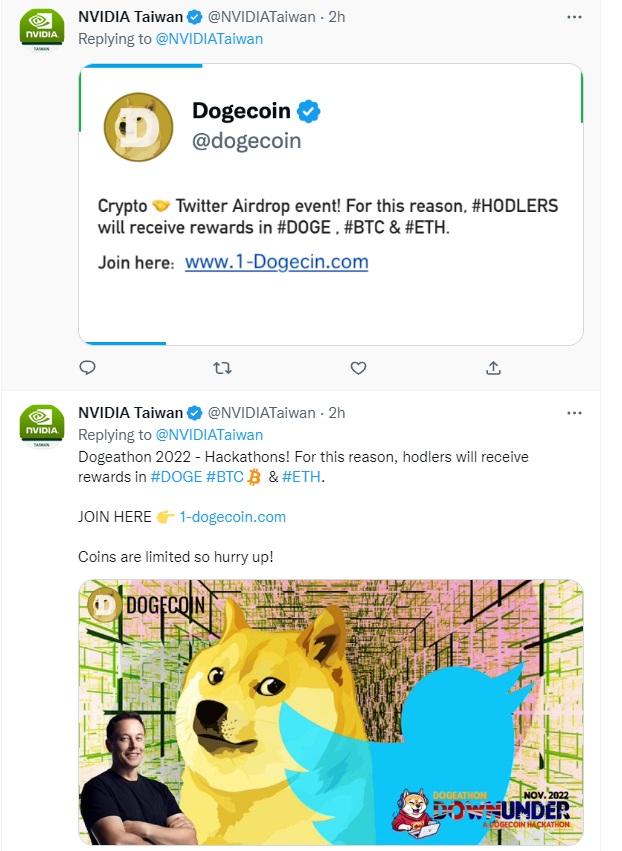 The NVIDIA account includes photos of Elon Musk, CEO of Twitter, as well as references to the event that is officially recognised as the Dogeathon. In addition to this, it announces that it will temporarily triple the number of Dogecoin in circulation and provide extra benefits to investors in cryptocurrencies. The presence of the verification checkmark demonstrates that this channel belongs to the genuine NVIDIA brand, in contrast to the many fake accounts that are currently operating on Twitter. The action in and of itself is most likely insecure.

Whether done via the Taiwanese account or another official route, NVIDIA has not yet commented on the suspected breach. On Twitter, two of the famous crypto promotions are still active. However, it is unlikely that the account’s hijacked access would mislead widespread NVIDIA fans: As of this writing, @NVIDIATaiwan has a little more than 1,000 followers. The surprise tweets will probably not be seen frequently, given the additional almost three years of dormancy.

This security lapse is not the only one NVIDIA has had this year; this, despite seeming less serious. In the first three months of 2022, a hacker collective said that they had stolen the source code for DLSS, among other things, and utilized this information to threaten NVIDIA. Please don’t click on any links provided by this account. This goes without saying. In addition, this serves as a helpful reminder to change your passwords regularly and use two-factor authentication wherever possible. This is of utmost significance when it comes to official corporate handles.