FAT32, ExFAT and NTFS – the three most commonly used file systems across all existing computer Operating Systems. FAT32 is the oldest of the bunch, and ExFAT is the newest, but that is in no way how these file systems are ranked in terms of performance. If you wish to talk stats and specifications, the following is a concise overview of the specifications of the three file systems: 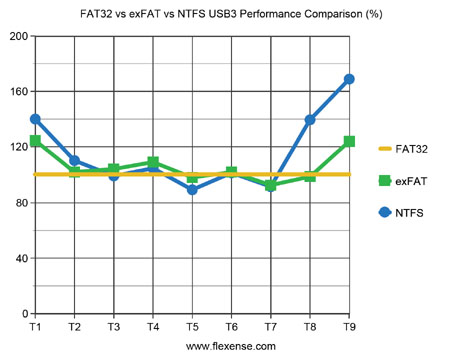 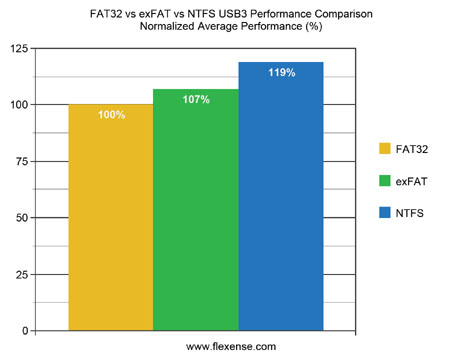 The following is a summary of the performance of each of these three file systems, taking into account the numbers, the statistics and the results of testing:

The FAT32 is the most aged file system out of the three file systems that the computers of today are compatible with. The roots of FAT32 go all the way back to the world’s MS DOS days as FAT32 is basically a (highly) improved version of the FAT file system that was used in MD DOS. Unfortunately, the reason why FAT32 continues to become more and more obsolete is because it is a 32-bit file system, and as that is the case, cannot store any files that exceed 4 gigabytes in size.

FAT32 was initially designed to be used on USB flash drives and still remains the most widely used file system on USBs. If you’re wondering why the world has not yet switched to using the much better ExFAT file system on USBs, it’s because not all devices that a USB flash drive can be plugged into have not yet become ExFAT-compatible. Even though FAT32 is a fairly mature file system, if you have read files from or written files to any USB flash drive in the past 5 years or so, you will know that while it’s nowhere near as good as its competition it is not incredibly sluggish either. If you are only going to be dealing with a relatively small amount of files that (none of which exceed 4 Gigabytes in size) on a USB, the FAT32 file system will do a pretty good job, and that is why people are still using it and are not pushing for widespread ExFAT compatibility too aggressively.

Storage devices that should use FAT32:

NTFS uses a b-tree directory scheme to keep track of file clusters, and the information pertaining to a specific file’s clusters is stored with every single one of its clusters instead of a governing table (like in FAT32 and ExFAT), making the location and retrieval of data significantly quicker. The NTFS file system was basically designed to be used on HDDs, and since people are known to store extremely large files on HDDs, NTFS storage devices not only function but actually thrive when filled up with a large number of files and a huge amount of data.

The file system caching capabilities of NTFS are quite superior as compared to the competition and the fact that it creates metadata for each and every file allows it to access stored data almost instantly. In addition, to top it all off, unlike FAT32 and ExFAT, NTFS comes with built-in file compression. It should also be noted that if you’re planning on installing a Windows Operating System to an HDD or SSD, it MUST use the NTFS file system as Windows cannot be installed on a drive that uses any other file system.

NTFS is built to withstand as much heat as you can throw at it, which is why it uses most of its resources and performs at its best when it is put to work on a storage drive that has a large number of files and folders and a lot of data for the file system to sort through and manage. Also, in the event that there is an abrupt shutdown while reading from or writing to an NTFS drive, there is a pretty good chance that little to none of your data will be lost.

Storage devices that should use NTFS:

ExFAT is the file system that Microsoft designed to (presumably) bridge the massive gap between FAT32 and NTFS. While ExFAT is a tremendous improvement over FAT32, it loses shamefully to NTFS in areas such as normalized average performance (which is basically all that counts), writing a large number of small files, reading a large number of small files, duplicate file search operations and file deletion operations. However, ExFAT does manage to match up to (and, by a small margin, even beat) NTFS in select areas such as when writing medium-sized files, reading medium-sized files and writing a small number of large files, among a couple of others.

The ExFAT file system is significantly more fragile as compared to NTFS, increasing the chances of you losing your data in the event of a sudden system shutdown during a read or write operation. ExFAT drives also get slower as more data is installed on them as it starts taking them longer to locate and access the data you are looking for. However, on the bright side, ExFAT is golden in terms of compatibility as even though Windows cannot be installed on an ExFAT storage device, almost all computer Operating Systems out there – including Windows and OS X – can read from and write to an ExFAT storage device.

The ExFAT file system is primarily designed for external hard drives and, more importantly, is highly optimized for flash storage devices such as Solid State Drives (SSDs) and USB flash drives. ExFAT is a 64-bit file system – unlike FAT32, its 32-bit predecessor – which means that it is capable of storing files larger than 4 Gigabytes. All things considered, ExFAT is ideal for file storage on external drives and flash storage devices and will be best suited for you if you will be working with thousands of files regardless of how small or large they are. However, keep in mind that the more data you store on an ExFAT storage device, the slower it will become when performing read, write and delete operations.

Storage devices that should use ExFAT:

USB flash drives on which you want to store files which, individually, are greater than 4 Gigabytes in size SSDs that you do not plan on storing an INSANELY large amount of data on (basically SSDs with a maximum capacity of less than 1 Terabyte). External HDDs that you won’t be storing a lot of data on but will be using on more than one kind of Operating System.

Difference: FAT32 vs NTFS vs ExFAT