Ever since late last year, many Windows 10 users have been suffering from and continue to suffer from a problem where their computer randomly shuts down, displaying a KERNEL_SECURITY_CHECK_FAILURE BSOD (Blue Screen of Death). In most cases, this issue is seen on computers with both an integrated Intel HD Graphics Processor and an NVIDIA GPU when launching Photoshop, another Adobe program or a completely unrelated program that is quite demanding of the host computer’s GPU. For some users, this issue starts wreaking havoc over their everyday lives out of the blue, whereas others start experiencing this issue after updating their NVIDIA GPU’s driver software to a version that contains this bug. 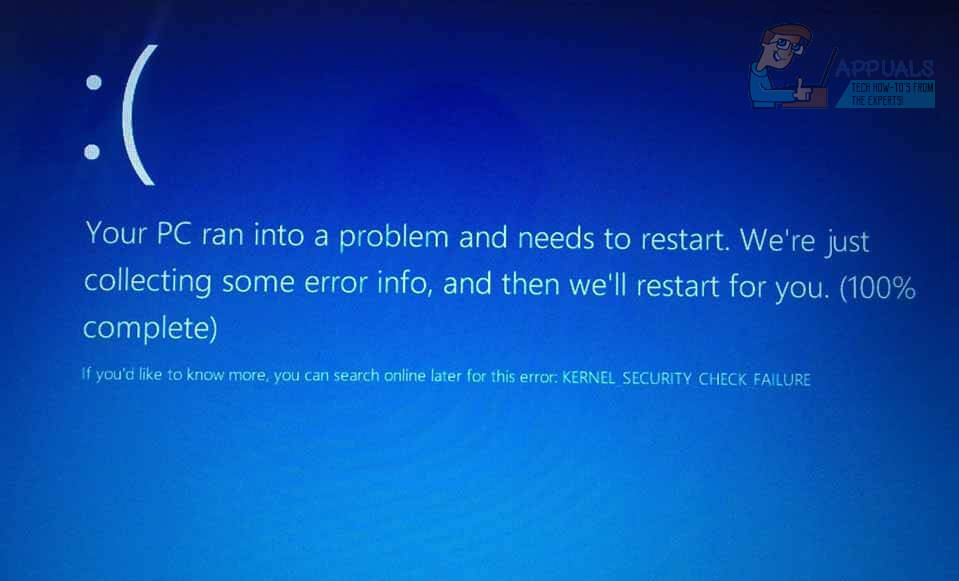 Blue Screens of Death not only cause a loss of progress and data but, in this case, also hinder an affected user from using affected programs. On the bright side, this Blue Screen of Death, like many others is completely fixable. However, on the not so bright side, there is not one universal cause behind this problem – there are quite a few different things that can give birth to this problem. That being the case, there is not one universal solution for this issue – there are quite a few, each of which has a pretty significant chance of being able to fix this problem for you.

The following are the most effective solutions that you can use to try and resolve this problem:

Solution 1: Change the default graphics processor for the affected programs

In most of the cases where the affected computer has two graphics cards, the cause of this problem is the fact that the program(s) that the affected user tries to launch right before they are faced with this BSOD are trying to use the integrated Intel HD graphics processor instead of the (probably) more powerful NVIDIA GPU. If that is the case, this issue can be resolved by simply changing the default graphics processor for any and all applications affected by this issue. If it wasn’t clear already, though, only affected users with computers that have both an Intel HD graphics processor and an NVIDIA GPU should use this solution. In order to apply this solution, you need to:

Right-click on the shortcut to an application that produces the KERNEL_SECURITY_CHECK_FAILURE BSOD whenever you try to launch it.

In the context menu, hover over Run with graphics processor.

The NVIDIA Control Panel will open up in the right section and will already have the affected application selected.

Open the dropdown menu underneath Select the preferred graphics processor for this program.

In the dropdown menu, click on High-performance NVIDIA processor to select it.

Click on Apply to save the changes that you have made.

After your computer boots up, launch the affected application that you just changed the default graphics processor for, and it should be launched successfully. If you see the KERNEL_SECURITY_CHECK_FAILURE BSOD again, try one of the other methods listed and described.

If this issue is affecting more than one application on your computer, you are going to have to repeat the process described above for every single one of those applications.

Navigate to the NVIDIA GeForce website using an internet browser of your choice.

In the Manual Driver Search section, select the kind of NVIDIA GPU that you have, the series that your NVIDIA GPU belongs to, the exact model number of your NVIDIA GPU, the Operating System that your computer is currently running on and your preferred language using the dropdown menus provided, and then click on Start Search.

The search will return the four most recently-released drivers for your NVIDIA GPU. Click on any one of them (it doesn’t matter which one as long as the one you select was released after the driver that you are currently having problems with).

After the upgrade is successful, check to see whether or not the issue has been fixed.

Solution 3: Roll back to an older version of your NVIDIA GPU’s driver software

Right-click on the Start Menu button to launch the WinX Menu.

Double-click on the Display Adapters section to expand it.

Right-click on your NVIDIA GPU.

Click on Properties in the context menu that shows up.

Navigate to the Driver

Follow the onscreen instructions (if any) and Windows will roll back your NVIDIA GPU’s driver software to the version that was previously installed on your computer.

Hold down the Windows Logo key, and while doing so, press E to launch the File Explorer.

Navigate to the following directory:

Note: X is to be substituted with the drive letter corresponding to the partition of your HDD/SSD that Windows is installed on.

Locate a file named exe. The file may also, in some cases, be named sniffer_gpu.exe.

Move this file to your Desktop.

Once your computer boots up, try launching Photoshop. If Photoshop launches successfully and you don’t see the KERNEL_SECURITY_CHECK_FAILURE BSOD, delete the exe or sniffer_gpu.exe file from your Desktop.