Experimental users of rooted Android phones should already be familiar with the plethora of tools to fine-tune your device performance. There’s no shortage of apps or methods to adjust your CPU frequency, build.prop settings, GPU configuration, and numerous other methods of achieving a blazing-fast device.

Of course, it can be annoying to put together the right combination of apps to achieve that performance boost. That’s why more experienced users can turn to scripts – all-in-one packages that will make a variety of changes to your Android system for maximum performance. That’s what the recently updated “Ultimate Performance Mod” (UPM) promises, and it surely delivers.

The UPM itself is a combination of scripts and tweaks by various XDA users, neatly bundled into a single flashable .zip. Normally I’m quite skeptical of anything that promises to make your device run faster, save your battery, etc – for example, there are so many RAM cleaner apps available on Google Play, yet these can actually have a negative impact on your overall performance.

So what exactly does Ultimate Performance Mod do?

It’s a combination of 4 popular performance engines for Android:

There’s actually a huge list of features, but I’m writing a guide, not a detailed overview of UPM. If you’re still skeptical, it’s worth noting that the original post on XDA has 973 “thanks” in a thread of 1,215 posts.

So let’s install this thing!

How to Install Ultimate Performance Mod on Android

First you’ll need to check if your kernel has init.d support. The easiest way to check is to download the Universal Init.D app I provided in the Requirements links – simply install it and launch the app, then scroll down and press the “Test” button, reboot your phone, and open the app again. 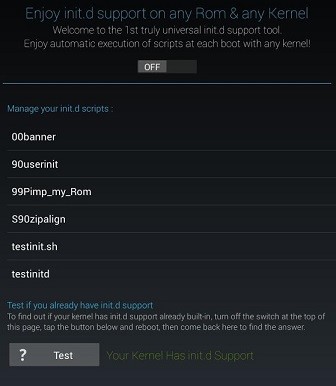 If your kernel already has init.d support, it will tell you. If not, you can emulate init.d support from inside the app by pressing the On/Off switch at the top and rebooting your phone.

If that feels too simple, you can build init.d support into your kernel – but that’s a bit advanced and requires a guide itself. But if that’s the route you choose, I’ll wait until you come back.

Boot into your custom recovery and flash the ultimate_performance_v13.zip from the links above.

Now you can reboot your phone, and if all went well, go ahead and see how much of an impact was made on your performance. Launch your favourite resource-intensive apps, scroll around the web a bit, etc.

If you’d like to see what sort of tweaks were made to your system, you can open your build.prop with a text editor and scroll down to the #By PurePerformance X section to get a small idea of the tweaks made.

I would never write about anything or urge people to install something I haven’t personally researched and tested myself. Let me say, on my integrity as a tech writer, UPM made a huge difference in the overall performance of my phone, which is running 3GB of RAM and an Octa-core Mediatek Helio X20 processor, on Marshmallow 6.0. It’s already a fairly strong device, yet after flashing UPM, my games launch within seconds, scrolling webpages feels buttery smooth, and I’m fairly certain its added a couple hours of battery life in standby mode.

If something goes wrong…

If you run into a bootloop after flashing this script, simply boot into recovery and flash the uninstaller – it should completely remove the script and restore your original boot.prop file. Worst case scenario, flash your nandroid backup.