A couple of weeks ago, we broke news that the unreleased Intel Core i5-13400 & Core i7-13700 desktop CPUs were already being sold to consumers in Pakistan openly. You could go online and buy one yourself despite the SKUs not having even been announced by Intel yet.

After our article, there was a major disruption in the market that caused the sellers and distributors to go into a frenzy, and stop the sale of the i5-13400 immediately. However, just a few days after the dust settled, all those listings are once again back up, plus more.

Amongst all this, we ourselves were able to get our hands on one of these units. We decided to put together a test bench to benchmark the CPU ahead of its official release.

Today, we bring you the first official (p)review of the Core i5-13400, performed with a retail sample acquired from the local market for 72,000 PKR (roughly $320). Our SKU was “Made in Malaysia” and came factory sealed with the bundled cooler and manual intact.

Interestingly enough, technically this is both an Alder Lake and Raptor Lake CPU because of the combination of silicon it uses under the hood. Those 6 performance cores are Raptor Cove P-Cores, which are new and exclusive to Raptor Lake, but those 4 efficiency cores are Gracemont E-Cores, carried forward from Alder Lake CPUs. 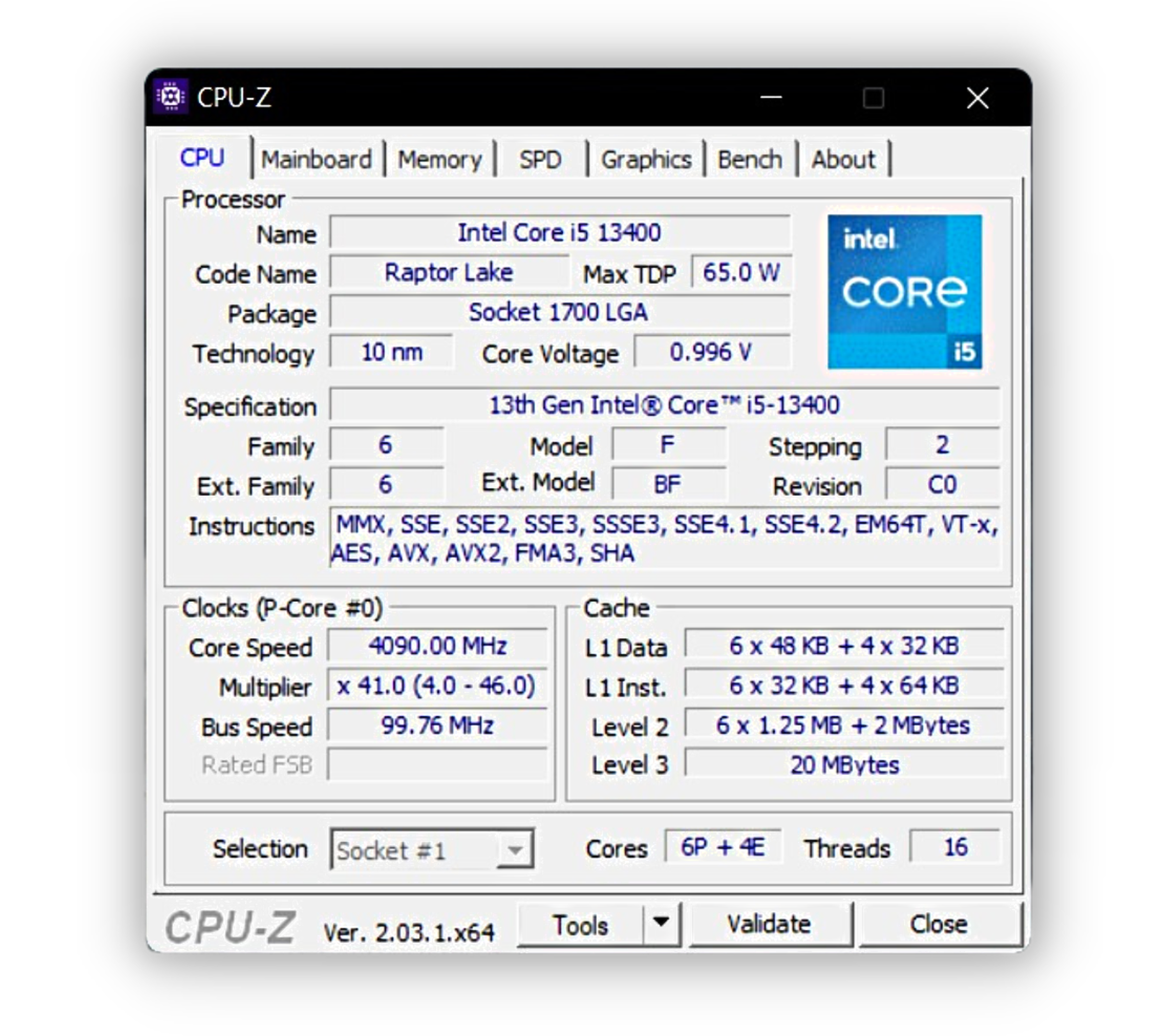 So, the i5-13400 is Raptor Lake B-0 revision and Alder Lake C-0 revision silicon at the same time, making it truly a hybrid CPU (no pun intended).

Update: After a lot of research and back-and-forth with a few experts, alongside online discussions among different forums, we have concluded that the Core i5-13400 is essentially a non-overclockable i5-12600K. It uses previous-gen Alder Lake (8+8) die but bins it down to a 6+4 configuration. But those 6 P-Cores are new Raptor Lake silicon. Intel has made this more complicated than it needs to be, and there might even be different versions of the i5-13400 classified as B-0 or C-0 revisions upon launch.

All tests were conducted on Windows 11 with factory settings, and with ReBAR enabled. A 256GB Samsung EVO 970 served as our boot drive, while all the games were installed on a 4TB Western Digital Black HDD. We will talk about thermals and power consumption at the end; our ambient temperature was 32 °C inside an air-conditioned room.

Starting off with some productivity benchmarks, we have Cinebench R23. As you can see below, we managed to net 1,708 points in the single-core test, and 15,598 points in the multi-core test. Considering the fact that each Cinbenech run is different, our single-core result is about the same as the Core i5-12400. The real improvement is seen in the multi-core score, which is almost 30% higher than its predecessor. 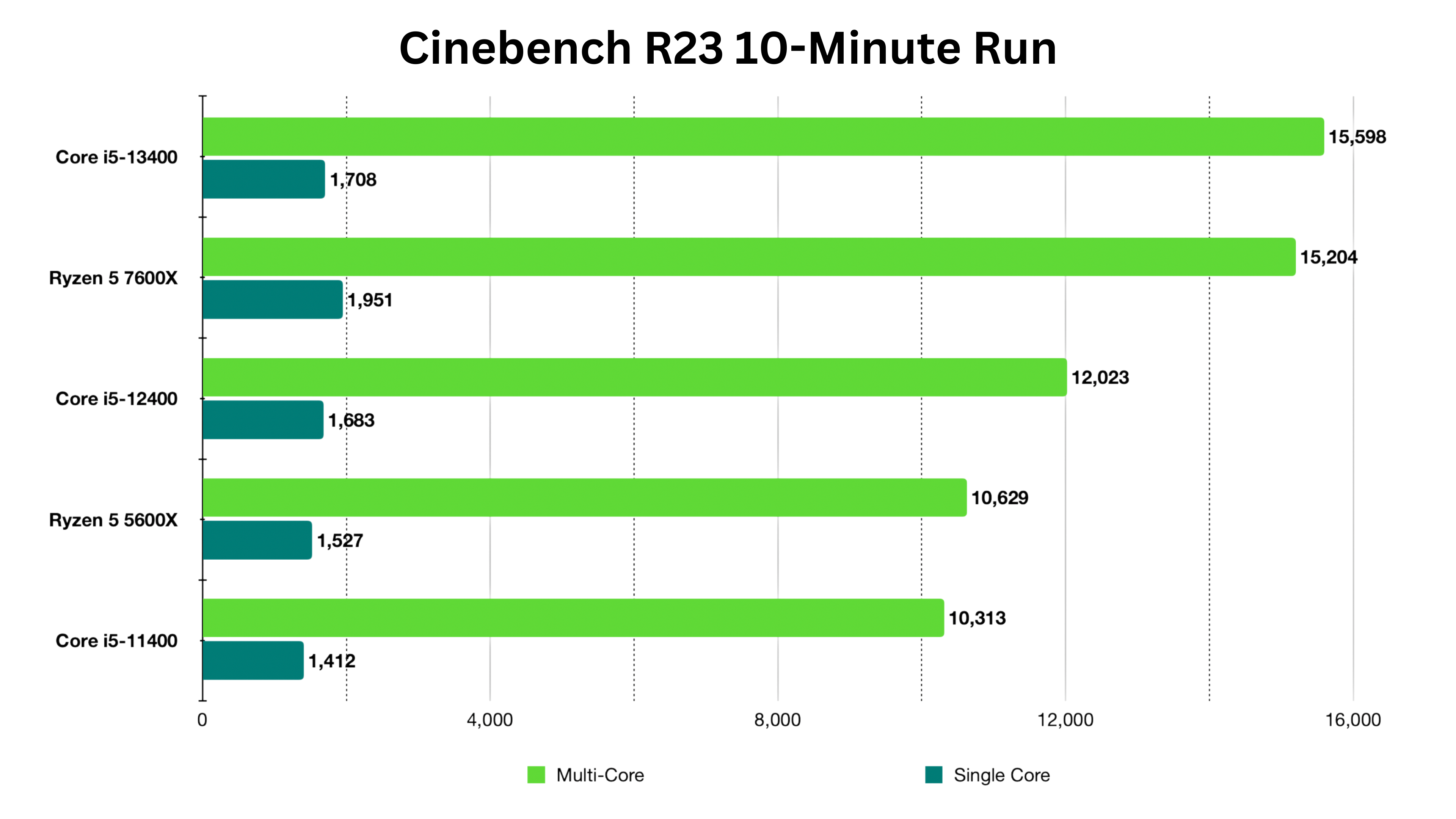 Moving on to Geekbench, the i5-13400 gains a healthy lead over its previous-gen counterpart. The Raptor Lake SKU nets 10,317 multi-core points and 1,621 single-core points. We see a repeat of our Cinebench results where the single-core score is more or less the same as last-gen. In fact, the i5-13400 actually came 0.93% behind the i5-12400 in single-core, but it was 28% ahead in the multi-core test. 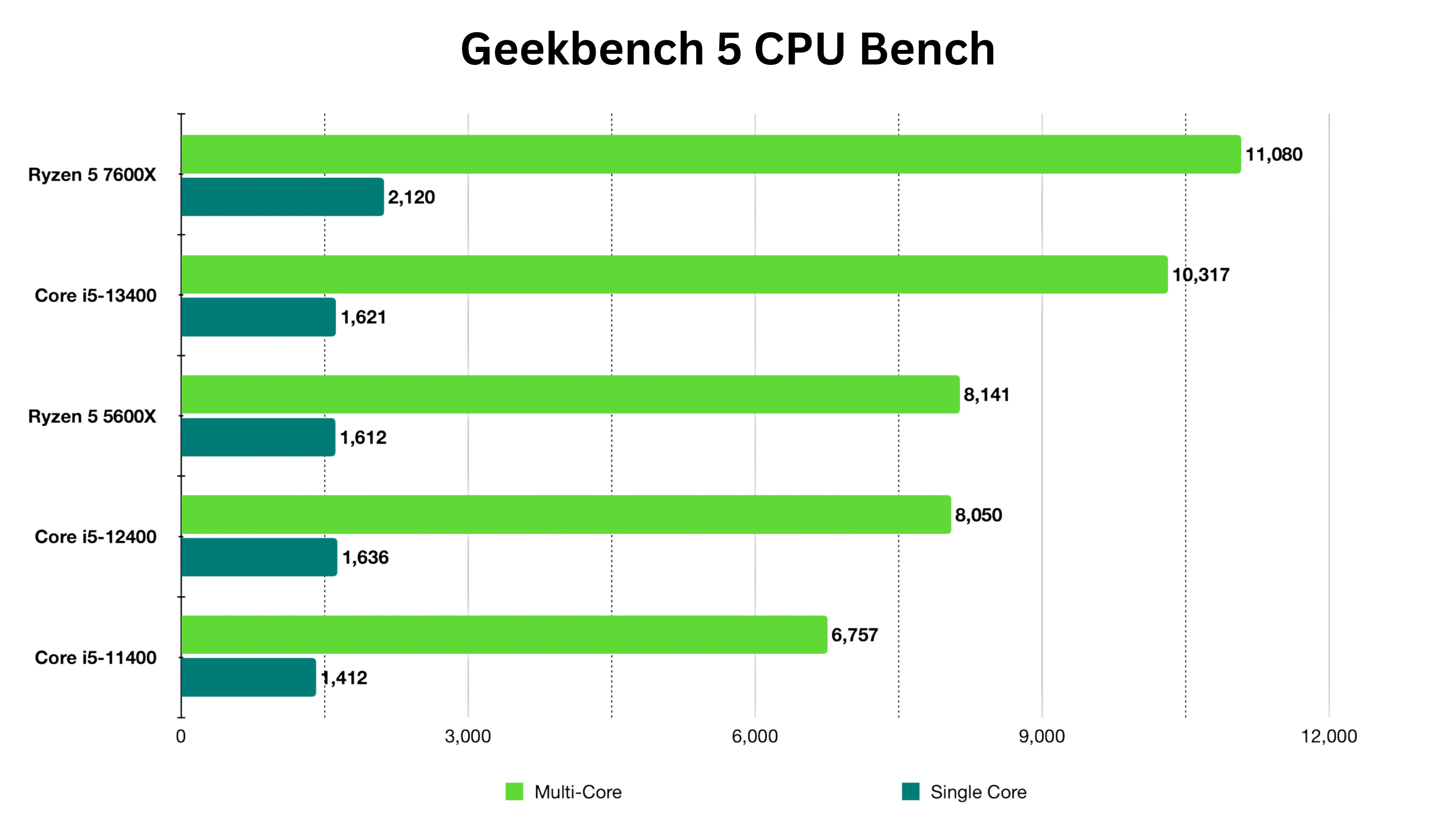 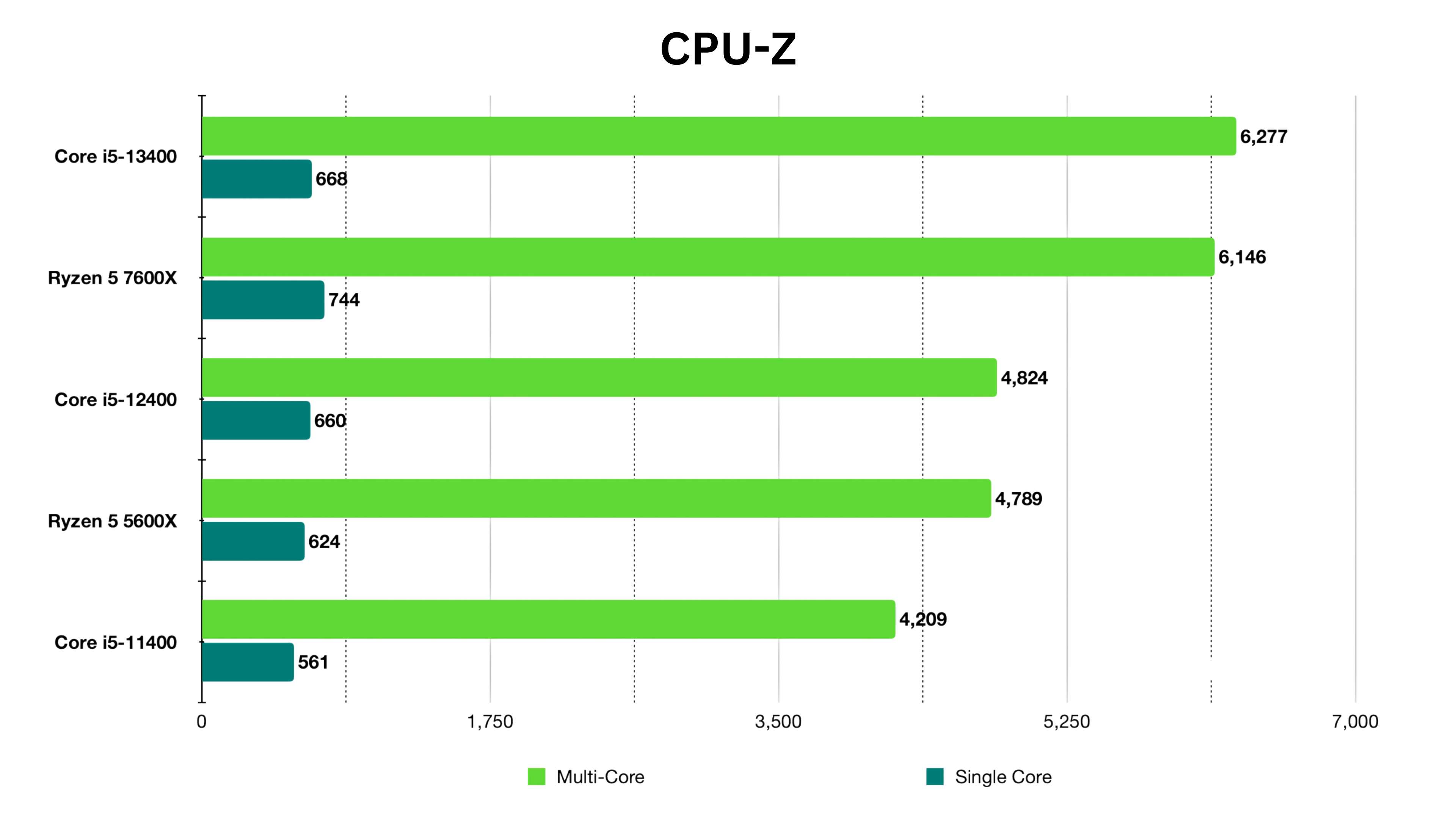 The combination of the best multi-core score and the second-best single-core score barely puts the i5-13400 in first position with a mere 0.8% difference between it and the R5 7600X in our CPU-Z testing.

Averaging across the three productivity benchmarks, the Intel Core i5-13400 is 25.32% faster than the Core i5-12400, but about 2.8% slower than the AMD Ryzen 5 7600X. The “lackluster” single-core performance is evident of the fact that this is refreshed Alder Lake silicon, but those four extra efficiency cores certainly help the i5-13400 gain a leg-up over its predecessor overall.

Coming to the gaming benchmarks, we tested the i5-13400 at both 1080p and 1440p resolutions with custom settings in each game. Where we couldn’t use a built-in benchmark tool, we played the game manually for a few minutes ensuring peak CPU load throughout to get an accurate reading. Rest assured, the results are quite interesting. 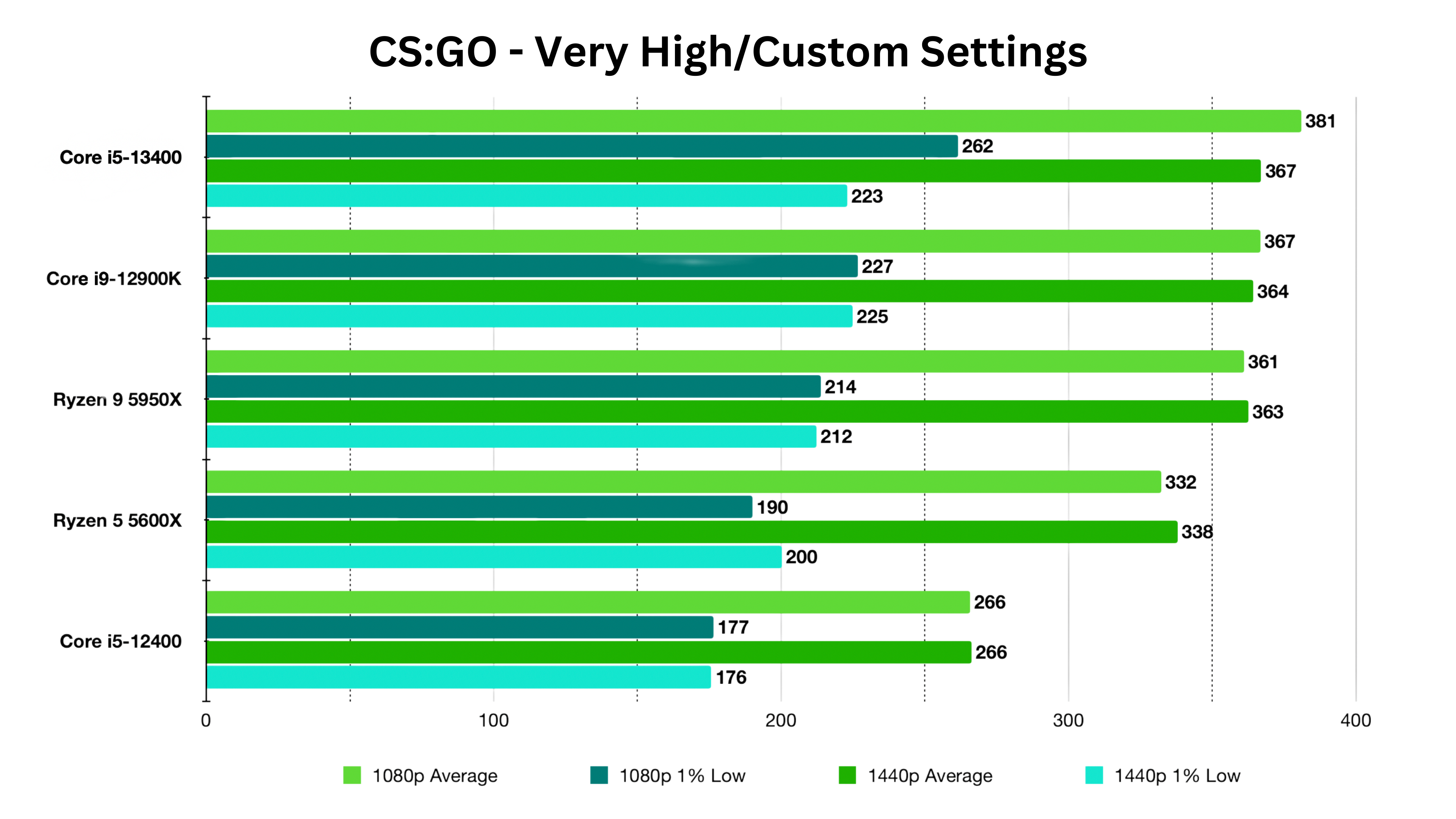 Moving on to Call of Duty: Warzone, a game generally conceived as GPU-intensive, which, in actuality, is one of the best for benchmarking as it requires a strong balance of both the CPU and GPU to avoid bottlenecking. Here, we once again see the i5-13400 stand toe-to-toe with the big boys, while edging out its Alder Lake counterpart by almost 14% at 1080p resolution. 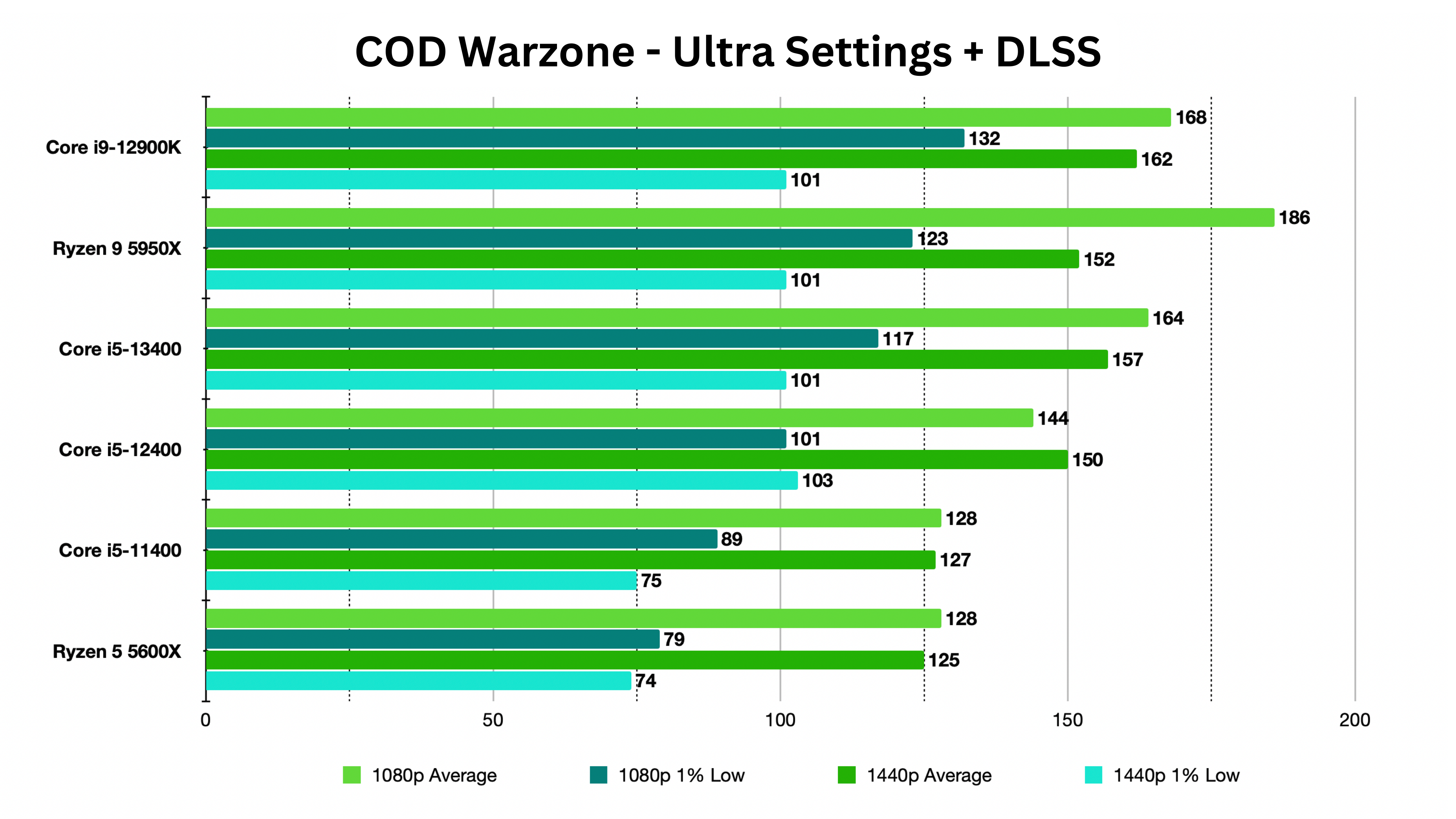 Up next we have Rainbow Six Siege, in which we saw a very interesting situation occur. While the 1440p numbers were solid and along the lines of what we expected from the CPU, no matter what we’d do the 1080p benchmark would throw up skewed results that were simply not representative of this CPU’s actual potential. We have decided to keep the 1080p numbers in, just for the sake of context, but for all intensive-purposes, they should not be considered here. 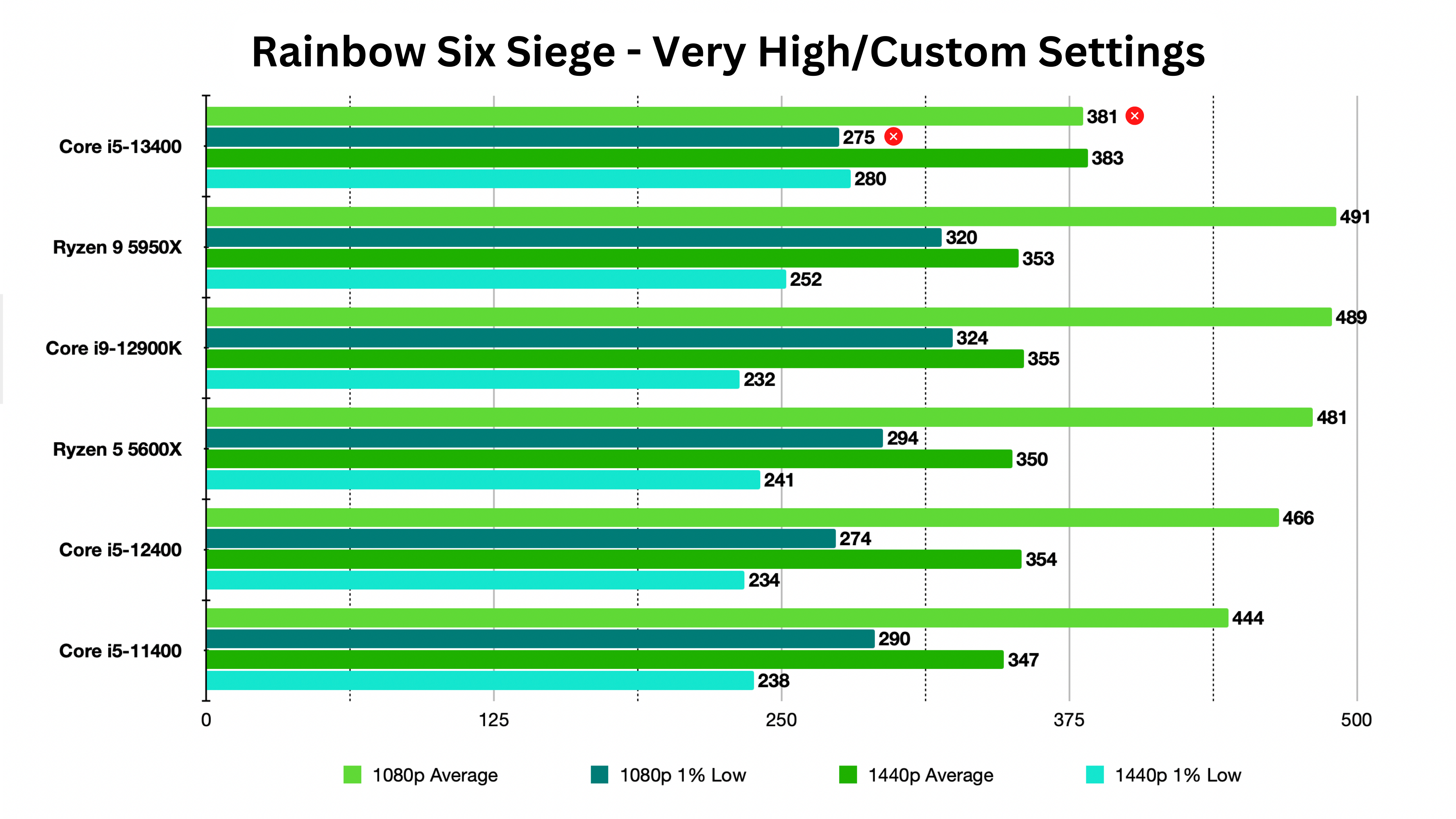 The fourth game on our test bench is Far Cry 6. We tested this game at only 1080p settings as it becomes more GPU bound as you move up the resolution ladder. Overall, the Core i5-13400 once again came out on top, beating last-gen flagships by a decent margin. The Raptor Lake SKU was 2.62% faster than the i9-12900K and 11.12% faster than the Ryzen 9 5950X overall. 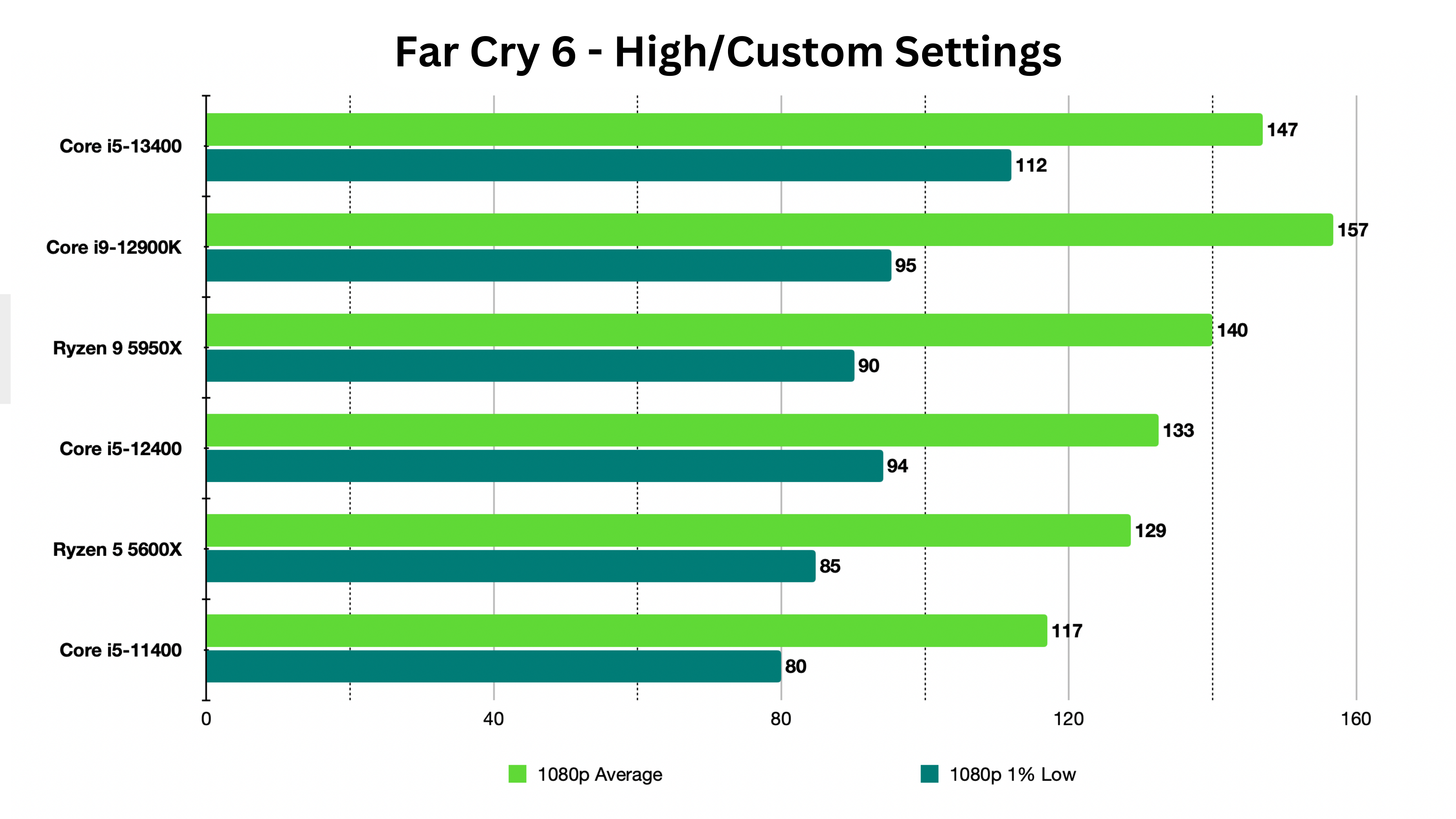 While this kind of result was expected, what really surprised us were the 1% lows the the i5-13400 was able to produce here. It was by far the best performer in this area, netting an almost 18% increase over the i9-12900K, which was its closest competitor. As for the i5-12400, well, it was also left in the dust with its successor managing to produce 14.6% more FPS overall. 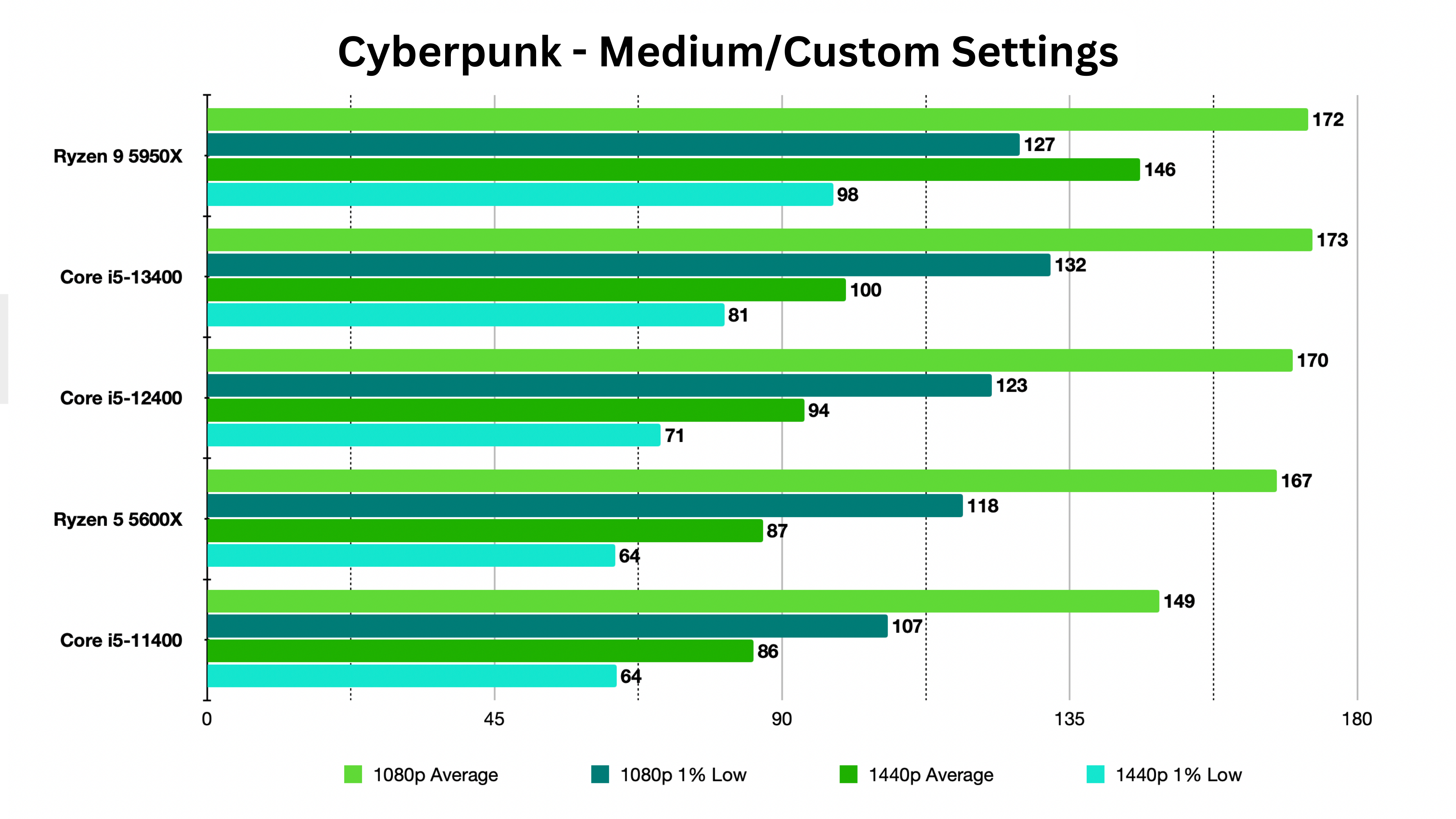 Last, but certainly not the least, we have Red Dead Redemption 2. This title saw the closest race between the i5-12400 and i5-13400 with the latter pulling ahead by only 3.5% in terms of overall FPS across 1080p and 1440p resolutions. Here, we also see the previous-gen flagships finally feel flagships with leading performance. 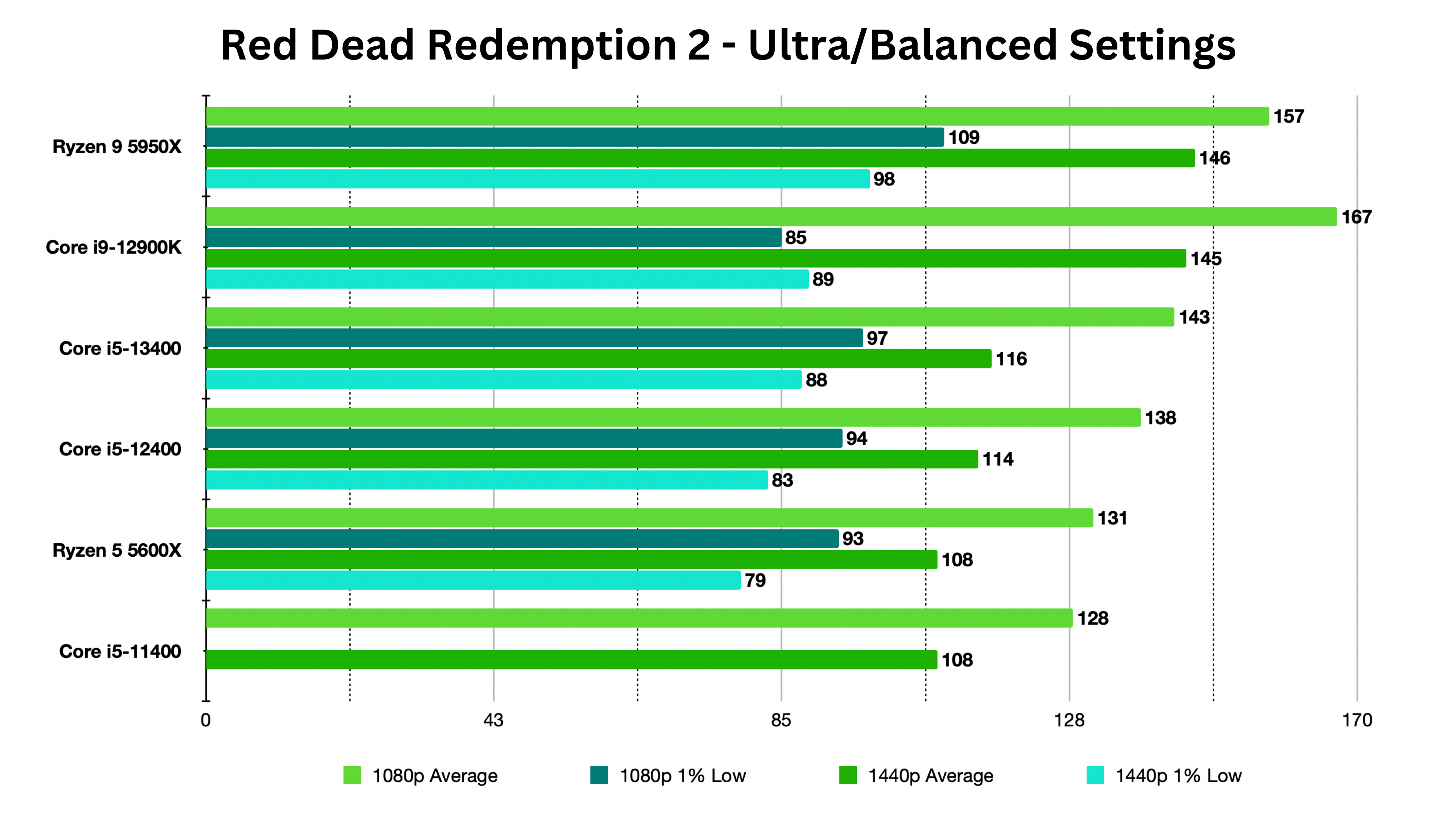 Averaging across the six main titles we looked at, the Intel Core i5-13400 is about 12% faster across the board compared to its predecessor, the i5-12400, in gaming. We saw the biggest discrepancy between the two in Counter Strike: Global Offensive where it had a 40.5% lead over the i5-12400 overall. On the other hand, Red Dead Redemption was the closest competition between the two with only a mere 3.5% difference in FPS.

The new Raptor Cove P-Cores, combined with those additional four E-Cores certainly helps the 13400 cement itself as the best budget CPU for gaming. It will once again wreak havoc on the market, and with such a weak Ryzen 5 offering from AMD this time around, it will be Intel’s marketshare to loose.

Before we move on to the next section, there’s a couple of things that should be pointed out. We tested Forza Horizon 5, Shadow of the Tomb Raider and Rocket League as well. The former two options are GPU-intensive and don’t paint the best picture for a CPU benchmark. Moreover, we were getting 580-600FPS with Rocket League at 1080p, which means the game clearly runs very well on any modern CPU, rendering the data kind of pointless.

We did all our testing on the 65W spec without changing anything in the BIOS. Generally, the i5-13400 will run at PL1 which keeps it limited to that 65W limit. However, during the Cinebench R23 run stress-test, we saw our i5-13400 hit a peak wattage of 87.4W, and it ran at around ~85W throughout the whole test. This means the CPU ran in PL2 the entire time as that can allow it to go up to 117W for momentary bursts.

Compared to the i5-12400, the Core i5-13400 is less efficient overall and more reliant on its PL2 state. The Alder Lake SKU only peaked at around 75W in the same Cinebench R23 run while running at right under 65W most of the time which means it only entered PL2 state momentarily but ran at PL1 most of the time. This means, the Core i5-13400 is 23.14% more power-hungry than its predecessor overall. 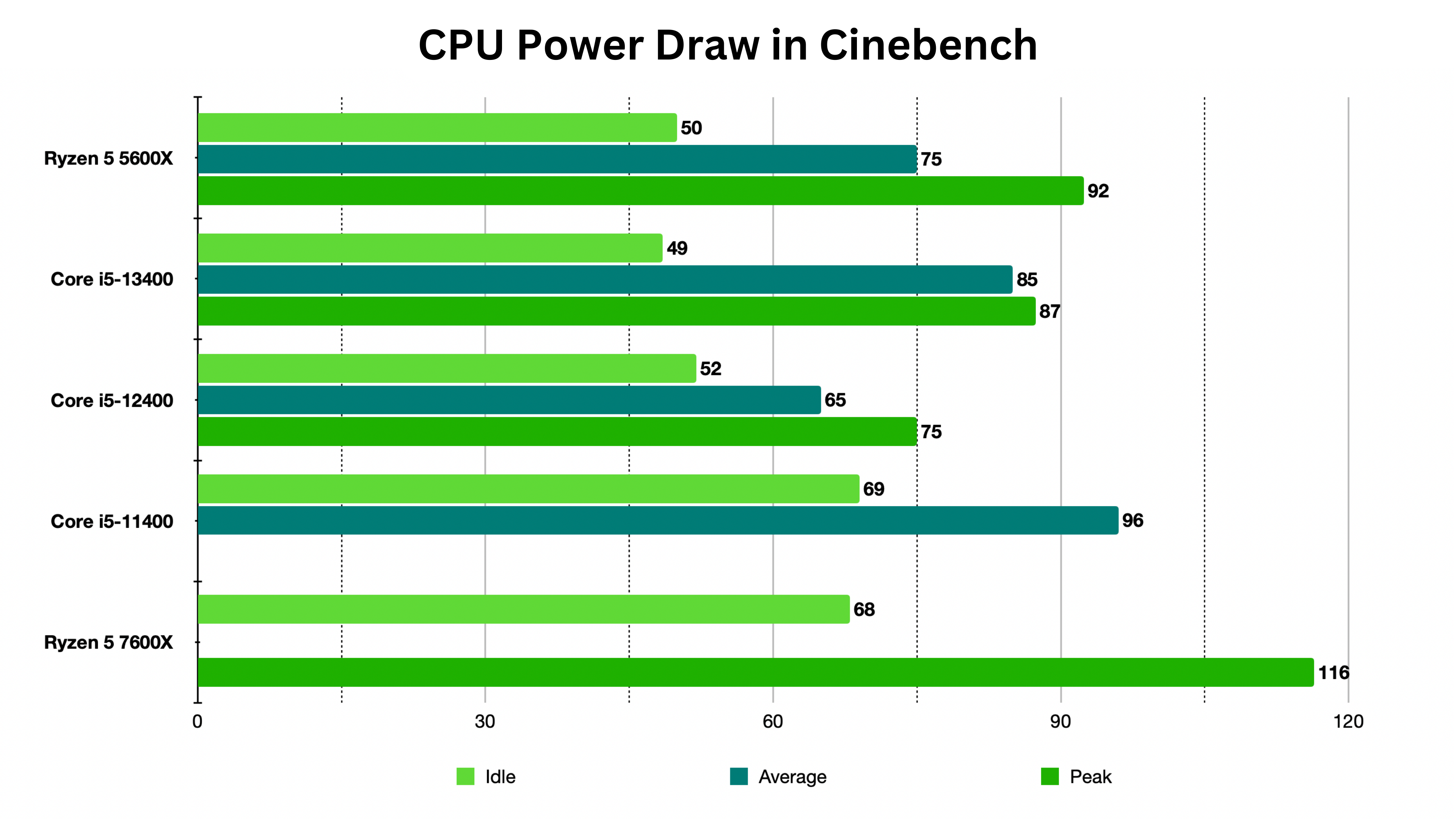 Keep in mind that it also has four extra efficiency cores that the 12400 does not have (not to mention how greatly they’re put to use) and it can also boost 200Mhz higher than the 12400. Given the impressive results we’ve seen today, the jump in power consumption certainly makes sense. Our total system power draw was recorded at 465W with the 13400, compared to the 12400’s 428W, making it 8% less efficient. 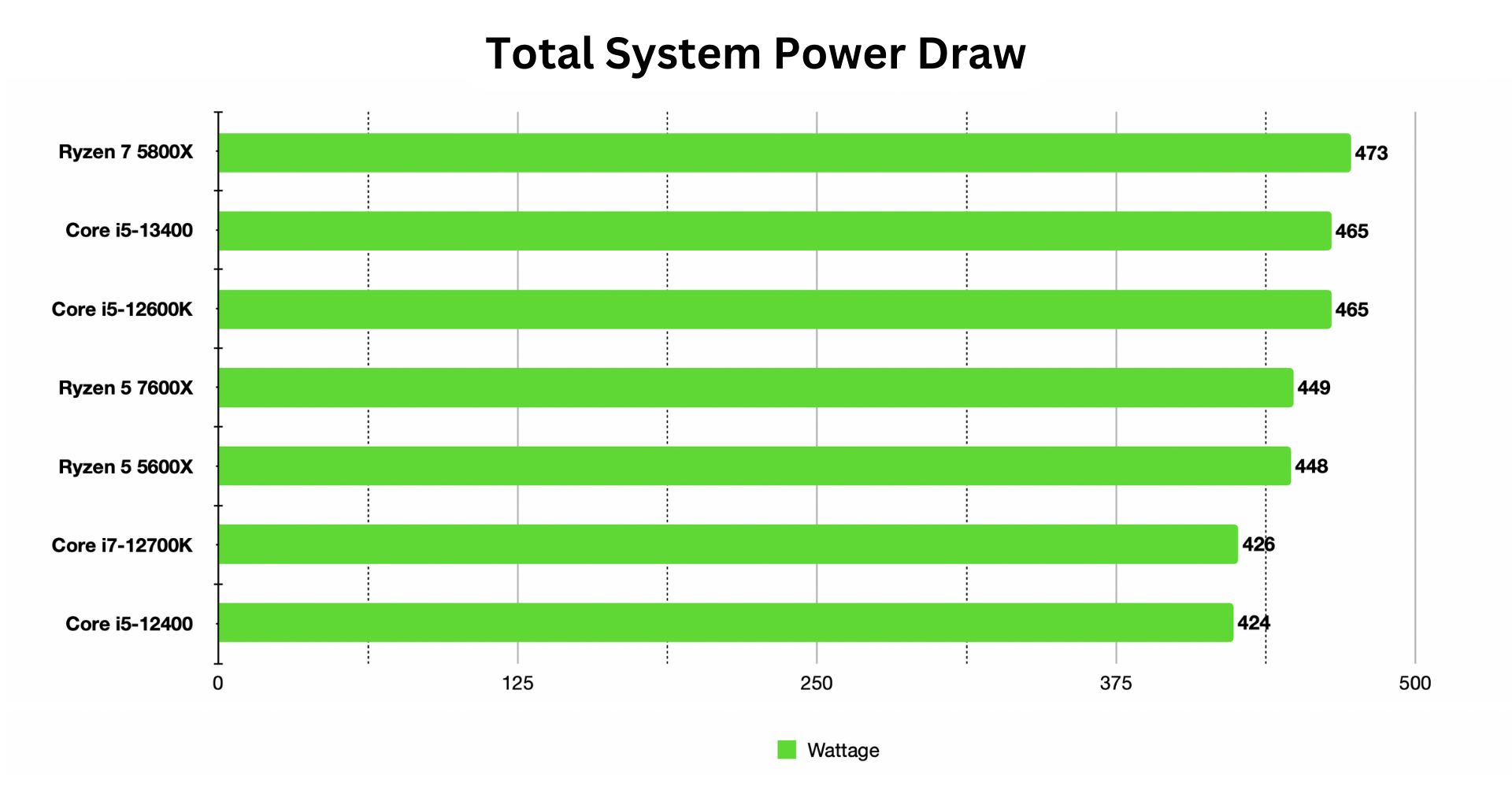 Moving on to the thermals, the stock cooler barely manages to tame the Core i5-13400. In our aforementioned Cinebench run, we saw the P-Cores absolutely riled up while the E-Cores sat comfortably without much heat. With a TJ Max of 100 degrees, the 13400’s performance cores averaged around 87.8 °C with one core reaching 91 °C. On the other hand, all four of the efficiency cores were sitting at exactly 74 °C.

Apart from the stress-test, we also noted down the peak temperatures while gaming with the Core i5-13400. As you can see in the list below, Warzone was the most taxing on the die with RDR2 following closely behind. Our CPU was a bit more at ease with Rainbow Six Siege, but we see the best numbers with Rocket League.

Compared to the Core i5-12400, its successor is a beastlier outing, not only consuming more power but subsequently spitting out more heat in return, too. Where the i5-13400 peaked at 91 °C while running Cinebench, the i5-12400 only went up to 80 °C and maintained an average temperature of 75 °C, making it overall 7.3% cooler than the Raptor Lake SKU.

It’s important to keep in mind that the i5-13400 is “C-0” silicon, which means it’s basically just repackaged Alder Lake with better clock speeds and tuning, and new E-Cores, sold as 13th Gen. Intel’s new hybrid platform has certainly matured since its launch and this CPU shows that even with last-year’s silicon, Raptor Lake can easily beat out the competition in price to performance.

All in all, it’s safe to say that the Core i5-13400 is going to be a favorite amongst the budget enthusiast crowd when it releases next month. Where AMD used to be the king of the 6-core segment, Intel has leveled up tremendously in these past two years. The i5-13400 will successfully build upon the legacy of its predecessor, the i5-12400, despite being pretty much the same chip.

This article, its contents, and the testing we did throughout with the Core i5-13400 was purely for educational purposes only. Appuals does not endorse working outside of embargos, or generating leaks from any illegitimate means. Some of the data in this article is taken from other sources, but it has been verified thorougly to ensure utmost quality standards.