Rooting can be really beneficial for users who want to get the most out of their phones. It allows you to remove the limitations from your device that are placed by manufacturers. It basically gives you control over your whole phone. The only drawback to rooting is that you should not install OTA Updates; if you do then it may unroot your device BUT you can always revert to the original firmware for which framaroot worked (and re-root it) by searching and downloading it from here

Framaroot is a one-click easy to use APK which Android Users can download directly onto their phones to root it. Before doing this; make sure you back up any and all data in case something goes wrong.

Before you continue with the steps listed in this guide; you acknowledge and accept that any damage to your phone caused by your attempts to root your phone is your own responsibility. Appuals, the (author), and our affiliates will not be responsible for a bricked device, dead SD Card, or anything to do with your phone. If you don’t know what you’re doing; please research and If you do not feel comfortable with the steps, then DO NOT PROCEED.

If you are now ready to root your android device; check the device compatibility by clicking here – If your device is listed, go ahead and if not then stop here. If you see your device, make sure you take note of the exp* name from the device heading; which will be used to root.

Devices. Please use CTRL+F to search for your device quickly.

After launching Framaroot if you see a pop-up saying “Your device is not vulnerable” then you can uninstall the app. In this case, Framaroot won’t work. After the exp* is executed; one of the following messages will come up which are pretty much self-explanatory:

“Success … Superuser and su binary installed. You have to reboot your device”

“Failed … Try another exploit if available”

Framaroot crash or freeze, in this case relaunch Framaroot a second time and select the same action and exploit

Once we are sure of what device we have and exp* we are going to use, lets download and install the Framaroot application.

Then download the Framaroot applicaton from here, android might say this type of file is harmfull to your device, ignore that. Press on the APK you just downloaded, press install and let it install, once done press on open.

After opening select SuperSU, You will see some exp* character, choose exp* (which you found to be compatible with your phone from the list of compatible devices) to initiate rooting. Once done, you should see a pop up window asking you to reboot your device, reboot it and you will now be rooted with root access. 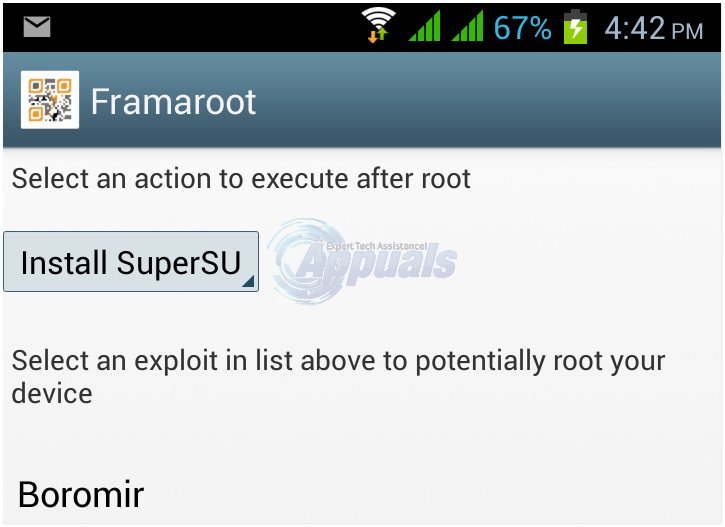 if Framaroot crashes or freezes on the first try, then try to open it once more since this is a common error, also often the first time you launch Framaroot by selecting Gandalf as exp*, it crash Framaroot. Don’t worry, in this case you have to re-launch Framaroot and select Gandalf again, the second time it should work.

If a pop up comes and says that the process has failed then try another exp*, if all fails then your phone’s kernel is probably upgraded and patched. There can also be one more outcome which says, Half succesfull, this means that the phone’s system is read only, which means that the phone cannot be rooted with this method.

If you recieved an error with a number less than 9, then the rooting method have failed with your device, if a 10 then try this version of Framaroot and repeat the process once more.