The ping command sends an ECHO_REQUEST to a remote server in order to judge just how solid a connection is. You could ping any remote host that you’d like via a host name or an IP address, but many administrators ping Google since it’s a stable site that many people access. Taking a look at the delay figures you receive when you ping Google is a good way to see if your Linux box has a nice snappy connection.  Naturally, you’ll need to be connected to the Internet before you proceed. You’ll also need to open a terminal window. Hold down Ctrl, Alt and T to open one or start one by clicking on the Applications menu, point to System Tools and select terminal. Ubuntu Unity users can search for the word Terminal on the Dash. You won’t need root access to proceed.  Method 1: Ping Google with IPv4 Requests  Even though they’re slowly being phased away, IPv4 technology is universal and some connections won’t support anything else. At the command line, type ping -c 6 google.com and push enter. You’ll then send six individual packets of data to Google’s servers, after which the ping program will give you a few statistics.  Pay close attention to these numbers at the bottom. Out of six packets transmitted, you should always see six received with 0% packet loss. If you lost any packets, then there might be a problem with your connection. Try the test a second time if that’s the case, just to make sure the irregularities weren’t a fluke. 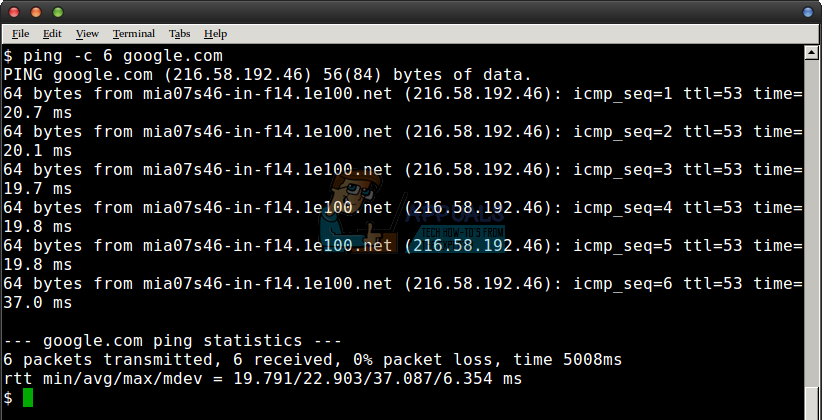 The time in milliseconds is how long the process took. Pay attention to the average time, which is the second number in the second line of the statistics block. This will tell you on average how long it took to reach their servers and make a round-trip back to you.  Method 2: Ping Google with IPv6 Requests  Internet Protocol version 6 (IPv6) is a more recent technology that many Internet providers now support. It’s designed to deal with the fact that traditional IP addresses are quickly running low with how many devices are online. Google was one of the first sites to support this new standard, and you can always ping Google with IPv6 requests.  Type ping6 -c 6 google.com and push enter to send six IPv6 packets of data when you ping Google. You’ll see the same exact statistical data as you did with the IPv4 command, and you shouldn’t see any lost packets at all. If you’ve seen any, then you might want to try again and then check your connection if you still see them. You’ll also want to check out the average time in milliseconds to see if things are moving at a snail’s pace or not. Generally these two ping commands will ensure everything is working just fine and you won’t have to do anything else. 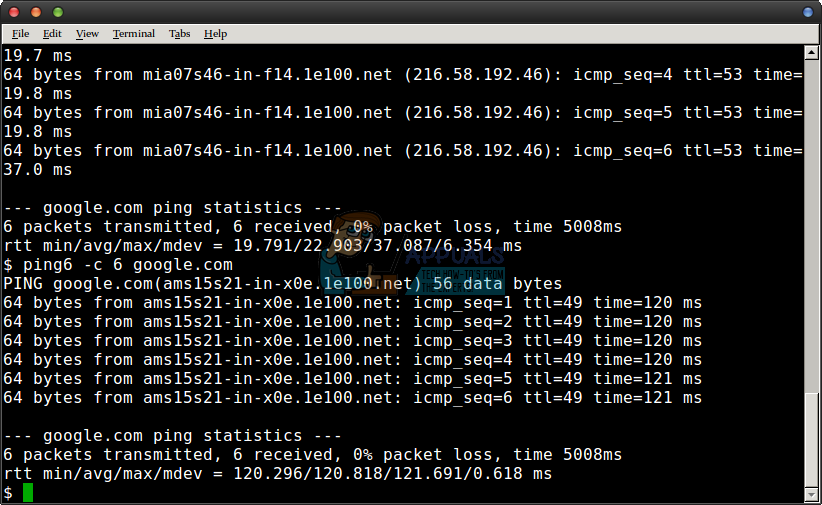 Keep in mind that you really shouldn’t perform this test too often. No one likes to have tons of unnecessary packets slung at them. Those who ping Google excessively might get ignored after a little while. This is a protection by Google itself to prevent people from being mean and abusing this service. In theory you could also ping Google’s public DNS system as well since it provides discrete IP addresses with which to do this, but it might not be a good idea to do that since Google DNS has a tendency to ignore non-DNS request packets that get transmitted to these addresses.

If you really want to ping another server, then replace google.com in the above commands with a different site name. Be careful, though, since some other sites might throw your packets out as well which could make it look like you’re loosing packets when you’re really not.