Standalone applications from GoToMeeting only officially support the Microsoft Windows and macOS platforms. Nevertheless, it’s become an extremely common way for developers and business personnel to communicate online. Few Linux users would want to have to migrate to another operating system merely because of a single app, no matter how useful it is.

Fortunately, there’s an HTML5 version of GoToMeeting that works perfectly fine with Google Chrome under the GNU/Linux distributions that support Chrome. You’ll need genuine Chrome for this since it uses some technologies that Chromium doesn’t support. Likewise, you’ll receive an error message under Mozilla Firefox. While the necessity of Chrome might not sit well with users of true libre distributions, it’s still much better than having to migrate to a different operating system. You can also join GoToMeeting through the Web interface easily without any other concerns.

You’ll need to start Chrome up, assuming that you have it installed. Click on the Applications or Whisker menu and then select Internet before clicking on Google Chrome. You might also want to search for it from the Ubuntu Dash depending on what graphical desktop you’re currently using. While there was a big deal made about Google Chrome no longer supporting 32-bit Linux distributions, they do continue to provide 64-bit .deb and .rpm packages for Debian, Ubuntu, Fedora and openSUSE.

The .deb packages should also work with Linux Mint while the .rpm packages should do nicely with CentOS and Red Hat. You can download a prerequisite package if you don’t already have it installed at https://www.google.com/intl/en/chrome/browser/desktop/index.html, but if you already do have Chrome then you don’t need to do anything else.

Once you have Google Chrome up and running, type https://app.gotomeeting.com/home.html into the URL bar. You can copy and paste this link into the browser using your mouse’s right button or by tapping the Application key and selecting Paste after copying it. Google Chrome also supports the standard Ctrl+C and Ctrl+V keyboard shortcuts you’re probably used to. You won’t have to worry about any of those issues that you find at the terminal here! 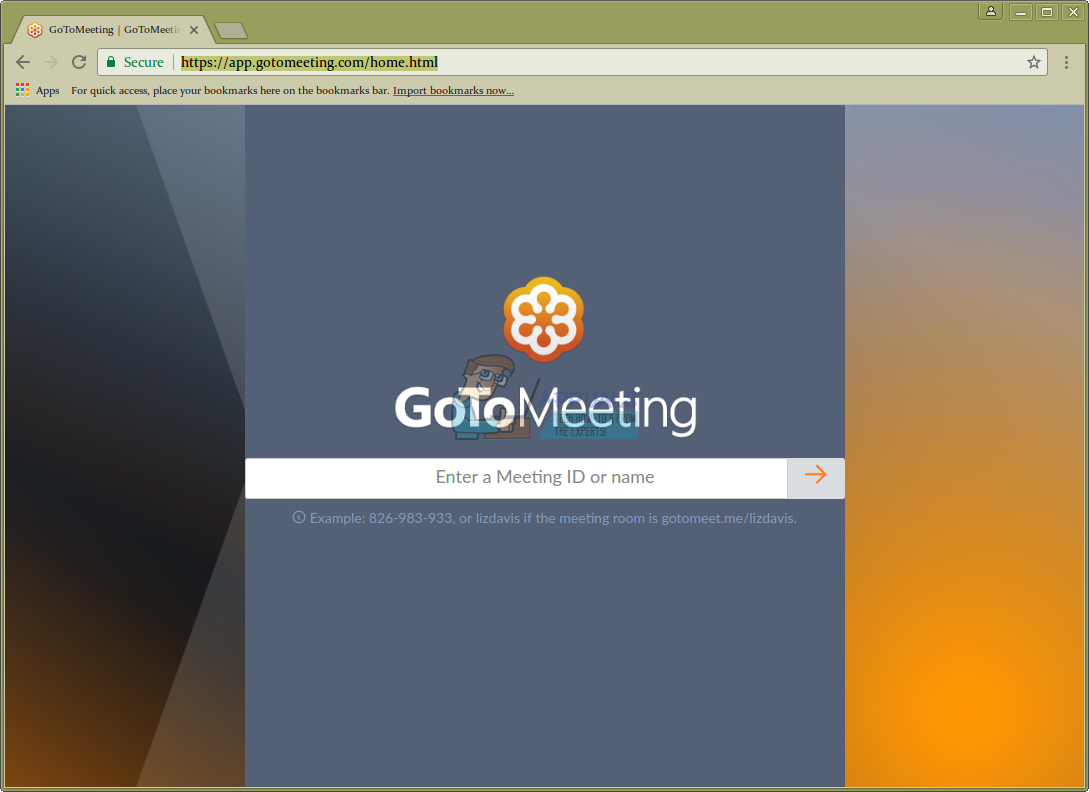 As soon as the page resolves, you’ll see a box to join GoToMeeting sessions in progress. Type the phone number or the name of the GoToMeeting session you’d like to join. You may also wish to push Ctrl+D to bookmark the page to make it easier to find again. 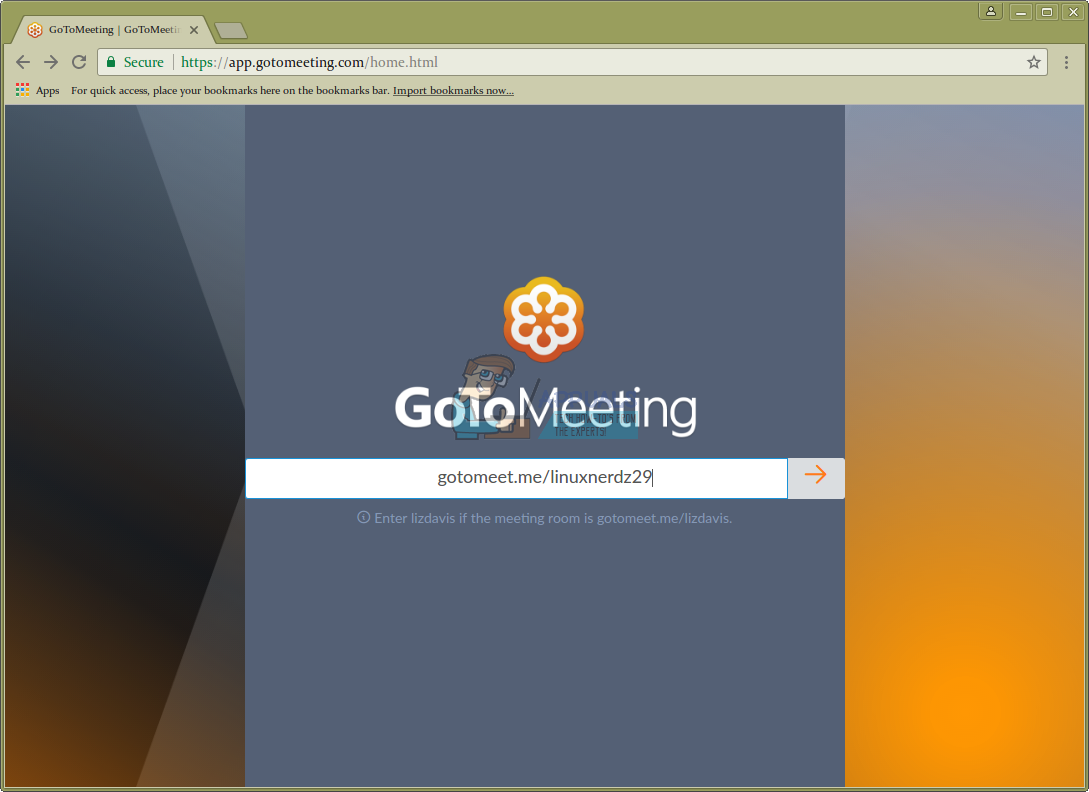 Push enter or click the button to join GoToMeeting sessions as soon as you’re ready to. You’ll receive a question about audio options once you do, however.

If you want to use your actual own telephone connection, then click on “Phone call” and you’ll receive instructions to dial. Should you have access to a computer audio system, then you can instead click on “Use computer audio” for a short set of options regarding audio settings. You can additionally click on “I don’t need any audio” if you’re just going to use the text chat window. 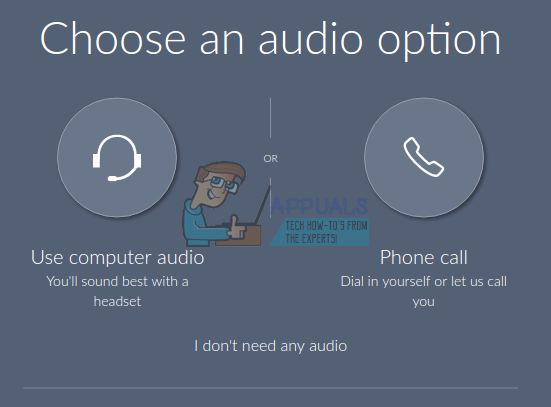 Regardless of which option you select, you’ll want to then click on the Setup button and agree to permit Web Viewer if you plan on viewing anyone else’s desktops. This is unnecessary if you won’t be sharing desktops. There’s actually a Google Chrome plug-in available to share Linux desktops, but this too is unnecessary when working with Windows and macOS users unfamiliar with GNU/Linux.

You can get more control over your microphone and other audio settings while you’re chatting. Search for PulseAudio Volume Control at the Ubuntu Dash. It might be under Sound & Video in your Applications or Whisker menu. You could also hold down the Windows or Super key and push R then type pavucontrol and push enter. If you watch videos online, then you might have used this control to make things louder in the past 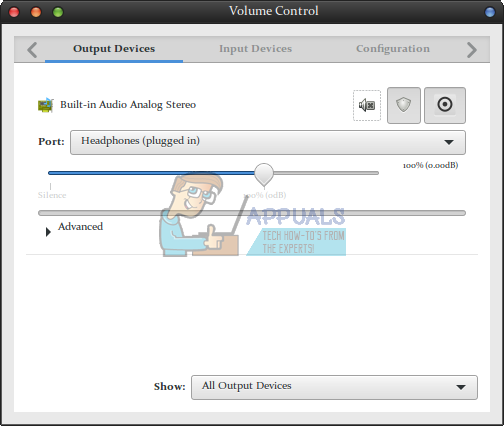 Click on Output Devices and set an audio level for your headphones and then click on Input Devices to set a microphone level. This is done through the PulseAudio system in Linux itself, which means you can do it even after you join GoToMeeting sessions that are already in progress. You might want to use this option if you’re having an issue with your voice sounding garbled. Your microphone gain may be turned up too high. You’ll also want to click on the speaker with the x icon on it if you either want to mute your microphone for a moment or if you need to unmute it because any of the other users in the room have been complaining that they can’t hear what you’re saying. More than likely, you’ll not want to turn the volume up over 100%, because this can actually cause distortion.