Error code (0x409) 0x80070002 indicate that there is an error with the built-in apps, due to which you can’t sign into the Xbox app. You will also get an error message saying We are unable to sign you in at the moment, and there is also the possibility of having this exact same issue with error code 0x406.

You will get this issue when you try to sign in to the Xbox app on Windows 10. You won’t be able to sign in, and the sign in window will most likely disappear after a second or two. This issue appeared for quite a few users, and it is actually a tricky one because plenty of people really need their Xbox app on Windows 10 to work. This led to a lot of frustration and anger with Microsoft’s users.

Fortunately, there are a couple of things that you can try, and all have been reported to work by a number of users. If one of the methods doesn’t work, try the other ones, you are bound to find one that fixes the issue. 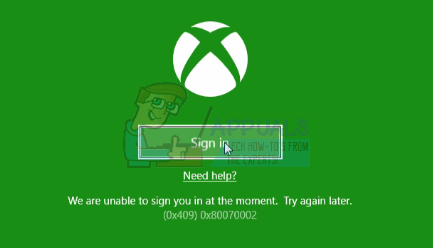 As is the case with a lot of issues that Windows users are having, a simple restart can fix plenty of problems, from temporary files being corrupt, to drivers and software not loading, which leads to other issues such as this. Simply right-click the Start menu, and choose Restart from the Shut down or sign out menu. Wait for your device to boot back up and see if that fixed the issue. This is the simplest way to solve it, but if it by any chance doesn’t work, move on to the second method.

Windows 10 was released as a package, as it came with plenty of built-in apps offering all kinds of functionality. However, some of those built-in apps, such as the Xbox app, are dependent on other ones, and if those other ones are missing, they won’t work. Fortunately, there is a simple way to make sure that you have all necessary apps. Make sure that you don’t make any mistakes with the commands below. The safest way would be to copy them, and paste them in the Powershell (use right-click, then paste, because the Ctrl + V combination doesn’t work here).

This is one of the situations where it’s a mistake on Microsoft’s end, and some users have reported that there is an update, both for Windows 10, and the Xbox app, that fixes the issue. However, not everyone’s issue is fixed, and if you’re one of those who are still struggling with the problem, use the methods above to solve it.