The Windows Script Host Error can seem like a virus or malware infection to the untrained eye, however, it is nothing more than an error with the VBScript file. It appears with all versions of the operating system, and it doesn’t depend on any specific software that may trigger it.

If this error happens, people could advise you to scan your system for malware, but certain users have even reported that their antivirus cleaned the virus but left the entry to trigger the .vbs file intact, and they still received the error.

Even so, there are a few things that you can try to solve this issue, and all have been reported to work by different users, meaning it might take a little trial and error to get things right, but the methods are guaranteed to help you. 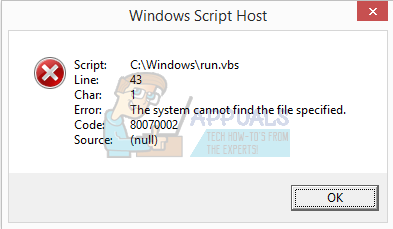 Method 1: Run the System File Checker to scan the system

This is a solution for a number of problems, and it’s also been reported to work with this one as well.

Method 2: Use the Registry Editor to solve the issue

Option 1: Return the default value of .vbs to VBS file

Option 2: Delete the entries after userinit.exe

Option 3: Delete the *.vbs entry which shows up on your startup

This method requires you to boot into Safe Mode, which is done by pressing F8 when you turn on your computer, right before Windows boots and choosing the Safe Mode option in the menu on a Windows Vista and 7 system.

At the end of the day, this problem can be a tedious task to solve. However, if you simply follow the instructions in the aforementioned methods, you will get rid of it and you won’t have to deal with it again.

How to Fix Windows Script Host Errors on Startup