We investigated this problem by analyzing various user reports and testing various fixes that affected users have successfully used to resolve the issue. As it turns out, there are several different causes that might be responsible for this problem:

If you’re currently struggling to resolve the very same error, this article will provide you with several different troubleshooting steps that you can use to mitigate the problem. Down below, you’ll find a collection of methods that other affected users have deployed in order to fix the issue.

In order to remain as efficient as possible, we advise you to follow the methods in the featured order – we arranged them by efficiency and difficulty. Regardless of the culprit that’s causing the issue, you should eventually stumble upon a method that resolves the issue for you.

Method 1: Investigating for a server issue

Before you try any other repair strategies, it’s important to start this troubleshooting process by ensuring that the issue is not beyond your control. Given the status code, it’s entirely possible that the issue occurs due to a server issue – either a scheduled maintenance period or an unexpected outage period.

With this in mind, visit this link (here) to see if other users are also having problems with the Microsoft Store. There are other similar services that will allow you to make the same investigation (here and here). 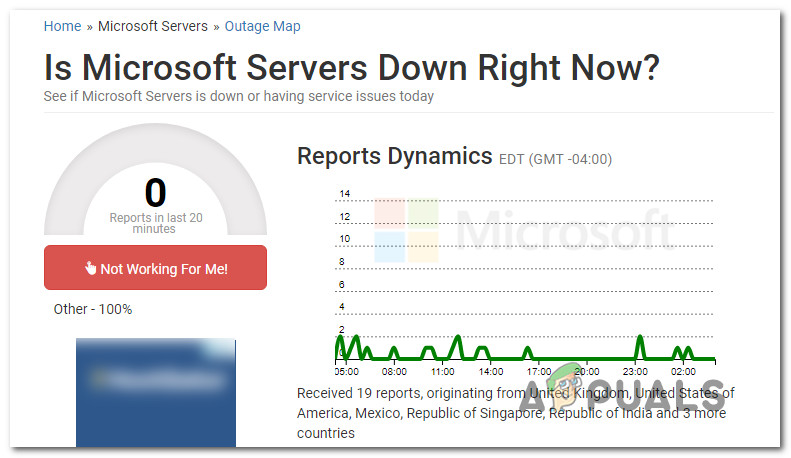 If you’ve found evidence that MS servers are having issues, wait a couple of hours before repeating the action that was previously triggering the 0x87E107E3 error code. The issue should eventually be resolved automatically.

If this investigation didn’t reveal any underlying problems with Microsoft’s servers, move down to the next method below in order to try some specific repair strategies.

As simple as this fix might sound, several affected users have managed to get around the 0x87E107E3 error code simply by looking out of their account and then logging back in. No restart or anything else was needed in their case.

There’s user speculation that the issue might occur due to a glitch account profile. It’s suspected that the issue started occurring right after a bad Windows update.

If you’re still encountering the same problem, move down to the next method below.

It’s possible that you’re encountering the 0x87E107E3 error code due to a file corruption problem with the Windows Store. This is typically reported to happen after a security scanner ends up quarantining some items or after a botched Windows update.

Several affected users that we’re also struggling to resolve the 0x87E107E3 error code have managed to resolve the issue by Windows Store and all components associated with it.

There are two ways of doing this on Windows 10. We are going to feature both, so make sure to follow whichever method is more convenable to your particular scenario and your expertise.