Several Xbox and Xbox One users are suddenly getting a Sign-in Error (0x87DD000F) when they try to log into their console, even though they are connected to an Internet network. Those encountering this problem report that they have an active Xbox Live membership. Although the issue is sometimes linked with a server issue on Microsoft’s side, that’s not always the case. Because of this roadblock, users are unable to play any online games or see their friend list. 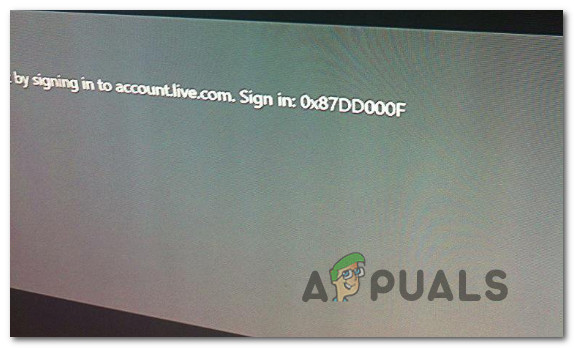 We investigated this particular issue by looking into various user reports and the repair strategies that are most commonly reported as being effective in this particular scenario. As it turns out, numerous causes might lead to the apparition of this issue. Here’s a shortlist of culprits that can be responsible for this issue:

If you’re currently struggling to resolve the same error message, this article will provide you with several troubleshooting guides that will help you fix and determine the cause of the issue. Each of the potential fixes explained below were confirmed to work by at least one other user that was facing the same problem.

For the best results, we advise you to follow the methods in the same order that we arranged them in. Eventually, you should found the fix capable of resolving the issue regardless of the culprit that’s causing it.

Before you move one to other repairing options, let’s infirm the possibility that the Sign-in Error (0x87DD000F) is not being caused by a server issue that is beyond your control.

We managed to identify some user reports in which the issue was facilitated by a maintenance period or a DDoS attack on the Xbox Live services. In this case, once the issue was remedied by Microsoft’s engineers, error code stopped occurring during the sign-up sequence.

To verify if there’s a problem with the Xbox Live servers, visit this link (here) and check each service for any inconsistencies.

If all services have a green checkmark, you can conclude that the problem is not caused by an Xbox Live service. In this event, it’s clear that there’s a problem with your local configuration – either your console or router/modem.

On the other hand, if your investigation revealed some wide-spread issues, certainly, the issue is not limited to your console. In this case, the repair strategies included below should be disregarded since they will not help you in resolving the issue. Instead, all you need to do is wait some time until the issue is resolved by Microsoft’s engineers. Be sure to check back regularly until the problem is taken care of.

In case you’ve determined that the issue is not caused by an Xbox Live server, move down to the next methods below to try out some repair strategies that were used to resolve the 0x87DD000F error code.

If you previously confirmed that you’re not dealing with a wide-spread issue, this procedure is the most effective way of resolving the 0x87DD000F error code. By performing a power cycle on their console, some users have reported that they were able to sign in with their account while avoiding the error message altogether once the next booting sequence was complete.

Don’t confuse this procedure with a regular restart. A power cycling will drain the power capacitors of your Xbox console, which will end up resolving a lot of firmware-related issues that are known to occur with both Xbox360 and Xbox One consoles.

Here’s a quick guide on performing a power cycle on your Xbox console:

If the same error message is still appearing when you try to sign in with your account, move down to the next method below.

Method 3: Signing with your account using Offline Mode (Xbox One Only)

As it’s been reported by some affected users, you might be able to resolve this issue by changing your Network settings to Offline Mode and signing into your user account. A lot of users have reported that going this route allowed them to circumvent the 0x87DD000F error code entirely. After they disabled Offline mode and they were able to use online features and access their friend list without issues.

Here’s a quick guide on switching your console’s network mode to Offline Mode and doing the signing in this way:

If the same issue is still occurring or you weren’t able to complete the steps above, move down to the final method below.

If none of the methods above have allowed you to resolve the issue, it’s very likely that the issue is actually caused by a router/modem issue. In most cases, it’s simply a case of an improper Alternate MAC address. If this scenario is applicable, you will be able to fix the problem by going into the Network menu and clearing out the alternate MAC address.

We have found several different user reports confirming that the steps below have helped them to circumvent the 0x87DD000F error. Here’s what you need to do: