Several Windows users have been reaching us with questions after getting the Error 0x80070141: The Device is unreachable when trying to perform certain actions. In most cases, the error code is reported to occur in situations where the user is trying to open, copy or move a JPEG file from a camera storage device to a computer. As it turns out, the issue is not exclusive to a certain Windows version since it’s appearing on Windows 7, Windows 8.1 and Windows 10.

We analyzed this error code by looking into various user reports, consulting the official documentation and trying out the various fixes that are recommended for this problem. As it turns out, this particular error message is known to occur in several different scenarios. Here’s a shortlist of the potential culprits that might be responsible for the error:

If you’re currently struggling to resolve the same error message, this article will provide you with several different troubleshooting guides. Down below, you’ll find a collection of potential fixes that other users in a similar situation have successfully used to resolve the Error 0x80070141. Each of the methods is confirmed to be effective by at least one affected user.

For the best results, we advise you to follow the methods below in the same order that we arranged them in. We ordered them by efficiency and difficulty. Eventually, you should stumble upon a fix that will successfully resolve the problem regardless of the culprit that’s causing it.

As it turns out, this particular issue can occur due to a File Explorer glitch that renders your OS unable to establish a stable connection with the external storage device. Before you explore other repair strategies, you should start your troubleshooting guide by ensuring that Windows is unable to resolve the issue automatically.

Several affected users managed to resolve the issue simply by running the Hardware and Device troubleshooter. This utility will investigate your device for any issues that are already covered by repair strategies and recommend a viable fix if a problem is found.

Here’s a quick guide on running the Hardware and Device troubleshooter:

If you’re still seeing the 0x80070141 (Device is unreachable) error when trying to copy media files from an external storage device, move down to the next method below.

Method 2: Reconnect with a different USB port (if applicable)

As some affected users have reported, this particular issue can also occur in situations where the users try to copy files from an external device with an unstable connection. One of the most probable causes for this issue are situations where one of the two connection ports is not properly connected.

It’s also possible that you connected the device to a partially functioning USB port that doesn’t have enough power to support the task at hand.

Some users that we’re also encountering the 0x80070141 error have reported that they managed to fix the problem by disconnecting the device from the USB port and connecting it to a different port.

NOTE: If you’re trying to copy files from an older device (like a traditional camera), try to connect it to a USB 2.0 instead of 3.0, since the issue might also occur because the device doesn’t have the necessary drivers to function on a USB 3.0 connection.

If you’ve reconnected your external device to a different port and you’re still encountering the same error message,

Method 3: Update iTunes to the latest version (if applicable)

If you’re trying to copy something from an Apple device (iTunes, iPad, iPod) to a Windows computer, chances are the issue is happening due to a severely outdated iTunes version. Several affected users have reported that they managed to fix the issue after they updated iTunes to the latest version available.

To update iTunes, open the application on your computer and click the Help button from the ribbon bar at the top, then click on Check for updates. 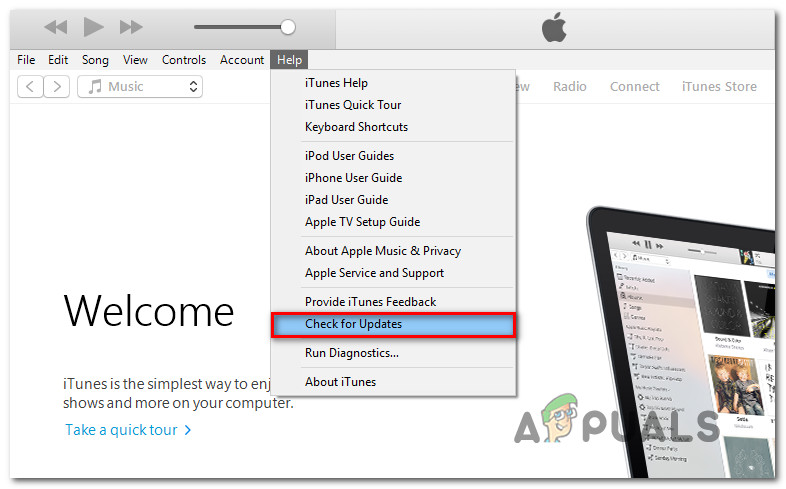 Follow the on-screen instructions to complete the update, then restart your computer and see if you can copy the files that were previously failing.

If you’re still encountering the 0x80070141 error even after updating iTunes or this method didn’t apply to your scenario, move down to the next method below.

Although we were not able to pinpoint the exact update, it seems like Microsoft has already released a hotfix for this particular issue. Several users have reported that the 0x80070141 error code was no longer occurring when they tried to copy the image files from an external device, which is further proof that the issue has been already patched.

To take advantage of the hotfix, you’ll need to install every pending update until you bring your Windows build up to date. Here’s a quick guide on installing every pending Windows update:

If you still encounter the same error message, move down to the next method below.

Method 5: Shortening the filename (if applicable)

As some users have discovered, the 0x80070141 error can also occur due to some Windows file name restrictions. The reason you’re seeing this error may be that Windows is trying to manage a file with an unusually long path or filename.

If this scenario is applicable, the only viable fix it to rename the file in question so that it stays under the 256 character limit. The easiest way to do this is to use File Explorer to navigate to the file that is failing to be copied over, right-click on it and choose Rename.

After you rename the file to a shorter name, retry the operation again and see if the issue has been resolved.

If you’re encountering the 0x80070141 error while trying to copy files to Windows from an Android device, chances are you’re seeing the error because the transfer protocol is “Connected as Camera”.

Several different users that were also encountering this issue have reported that they managed to resolve the issue after changing the transfer protocol to ‘Connected as a Media Device‘. After doing so and retrying the operation, they were able to copy the files without issues.

In some cases, some settings need to be reconfigured on your iPhone/iOS device which can sometimes get rid of this issue. Therefore, follow the guide below to reconfigure your transfer settings.