Dead by Daylight has been gaining a lot of popularity recently, but some users are not thrilled about it. One recurring issue with this game is the ‘Initialization error. This cross-issue problem is encountered during the startup sequence of the game – After the game asks you to press ‘A‘ to continue. After a short leading sequence, the ‘Initialization Error’ appears and is preventing the user from playing the game. This particular issue is not exclusive to a certain platform as it’s encountered on Xbox One, Playstation 4 and PC. 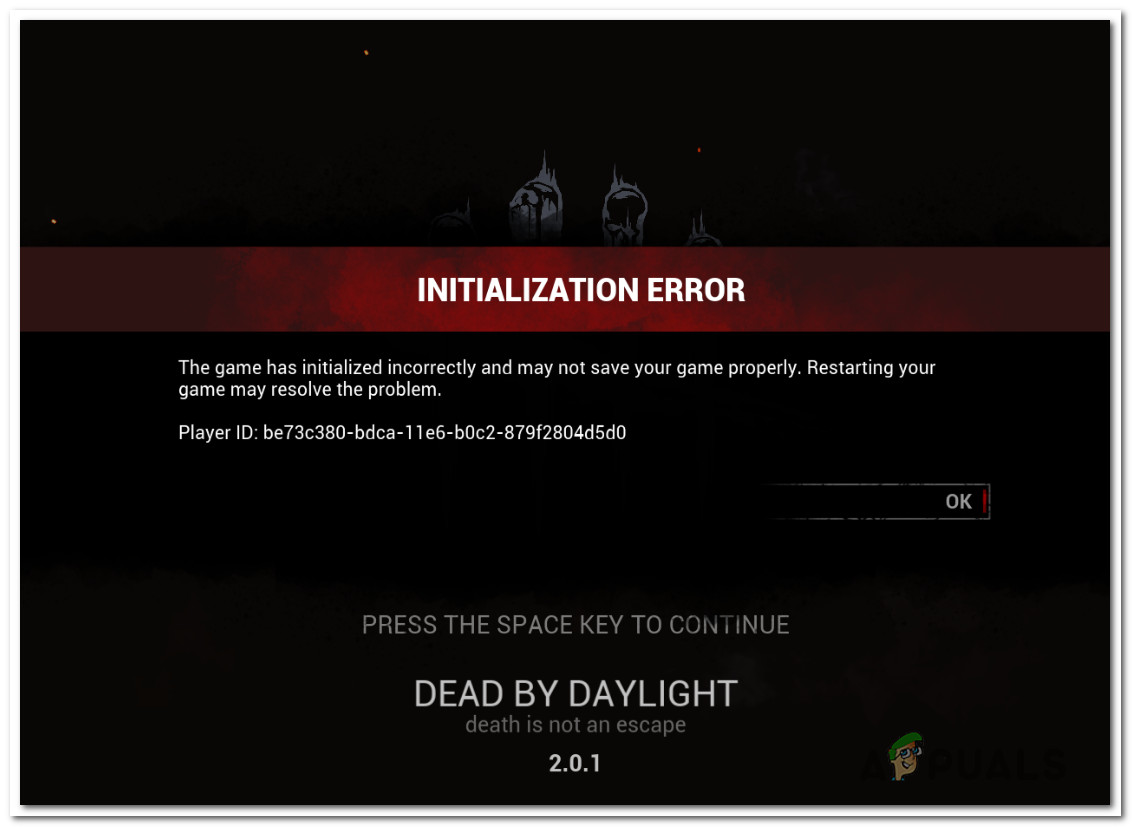 We investigated this particular issue by looking into various user reports and by testing out the different repair strategies that were successfully used by other affected users. As it turns out, several different scenarios might lead to the apparition of this issue. Here’s a shortlist of culprits that might be responsible for this problem:

If you’re currently to resolve this error message, this article will provide you with several different troubleshooting steps. Down below, you’ll find a selection potential repair strategies that other users have successfully used to resolve the Dead by Daylight ‘Initialization Error’.

Keep in mind that some of the methods presented below will not be applicable since the issue is multi-platform. For the best results, start following the instructions below in order and disregard the potential fixes that are geared towards a different platform. Eventually, you should find a method that will resolve the issue (or at least identify the problem) on your gaming platform regardless of the culprit that’s causing the issue.

Method 1: Investigating for a server issue

Before you pursue any other repair strategies, you should start your troubleshooting quest by ensuring that the issue is not beyond your control. Several affected users have confirmed that in their case, the issue was facilitated by a server problem the prevented the game from accessing the network features. The network services may be down due to scheduled maintenance or due to an outage period that was not planned.

This can happen on both PS4 due to Playstation Network issues and on PC or Xbox one due to an online Xbox Live service.

If you find yourself in a situation like this one, the only troubleshooting strategy you have is to confirm the issue and wait for the server issue to be fixed by Microsoft or Sony.

To verify if there’s a problem with Microsoft servers, visit this link (here) and check to see if any services are affected by problems.

If you’re encountering the issue on a PS4 console, access this link (here) and see if any services are preceded by a red exclamation point or a question mark.

If your investigation revealed that the issue is wide-spread and it’s occurring due to a server issue, you can conclude that the issue is not limited to your console. In this case, following any of the other repair strategies presented below is not advisable since they will not resolve the issue. if you find yourself in this scenario, all you need to do is wait until the issue is resolved by Sony’s or Microsoft’s engineers.

However, in case the investigations didn’t reveal any issue with the Xbox Live or Playstation Network services, start following the next methods below to apply some repair strategies that other affected users have successfully implemented to resolve the ‘Initialization Error’.

Method 2: Ensuring that the NAT is Open

As it turns out, this particular error message in Dead by Daylight is often linked to the fact that the Network Adress Translation (NAT) is not opened on the network that the gamin device (console or PC) is connected to. Several affected users have reported that they managed to fix the issue and play the game normally after they opened the status of NAT.

By doing this, you’re essentially ensuring that any type of connectivity issues caused by NAT inconsistency is prevented from occurring. This is a universal fix that will work regardless of the platform that you’re encountering the issue on.

Follow the instructions below to enable UPnP (Universal Plug and Play) on your router to allow your router to forward the required ports automatically and avoid issues such as the ‘Initialization Error’. Here’s what you need to do:

Note: If you’re certain that your router doesn’t support UPnP, skip this method and move directly to Method 3.

If you’re still encountering the ‘Initialization Error’ or this method wasn’t applicable, move down to the next method below.

Several Xbox One users who were also encountering the ‘Initialization Error’ when trying to play Dead by Daylight have reported that the issue was resolved after they accessed their console settings and cleared the persistent storage.

This persistent storage is a space that Xbox One automatically creates to store the content that’s directly related to the Blu-Ray disks that you insert in your console. But keep in mind that this fix will only be effective in situations where you own a physical copy of Dead by Daylight.

Here’s a quick guide on clearing the persistent storage on an Xbox one console to resolve the Dead by Daylight ‘Initialization Error’:

If you’re still encountering the ‘Initialization Error’ when you try to launch Day by Daylight or this method wasn’t applicable, move down to the next method below.

Method 4: Power-cycling your console (console only)

If none of the methods below have allowed you to resolve the issue, you’re likely dealing with a firmware glitch that is ultimately interfering with the connection between the game server and Dead by Daylight. In situations like this one, the only viable fix is to train the power capacitors to remove the temporary data that’s causing the issue. This will fix most firmware-related issues that might trigger this error message.

Affected users have confirmed this method for being effective on both Xbox One and PS4. We’ve created two separate guides to accommodate both categories of console players. Follow whichever guide applies to your situation.

Power-cycling on Xbox One

If this method wasn’t applicable or you followed it to no avail, follow the next method below.

Several Windows users that encountered this issue on a PC have managed to fix it by deleting the main game folder and then enabling the Steam Cloud feature. According to user reports, this procedure ends up forcing the Steam client to re-sync all files and bring the game to the latest version available.

This fix is only applicable to PC users. If you’re encountering the issue on a console, you will not be able to follow the instructions below.

Here’s a quick guide on deleting the Steam folder of Dead by Daylight and activating Steam Cloud to resolve the ‘Initialization Error’ on a PC:

How to Fix Dead By Daylight Initialization Error?